Beginning in the middle of September, tens of thousands of Haitians have taken to the streets in the capital, Port au Prince, as well as in Saint-Marc (Artibonite), Cap Haïtien (northern Haiti), Jacmel and Cayes (southern Haiti) and Gonaïves (central), in a boiling rage demanding President Jovenel Moïse leave office. 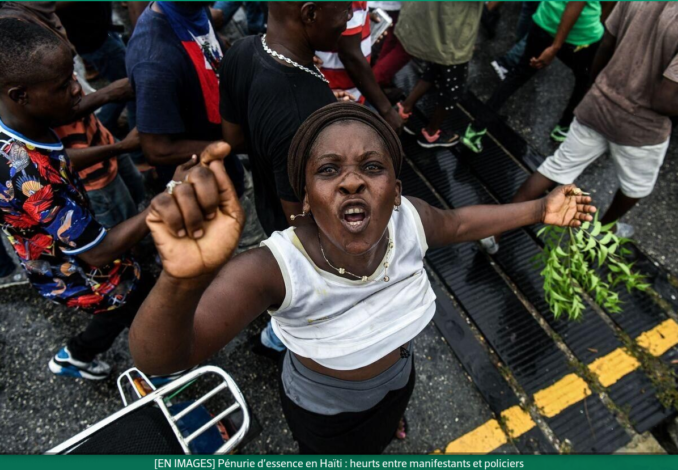 Even after the police used live ammunition to disperse the protests and admitted to killing six people, thousands have stayed in the streets. A group of Haitian exiles in Montreal (Le Regroupement des Haïtiens de Montréal contre l’Occupation d’Haïti) cites sources estimating that the cops have killed dozens of Haitians and wounded hundreds.

Starting early in 2018, Haitians began looking around their neighborhoods for any concrete results from the $4.3 billion that Venezuela had provided to Haiti in low-cost loans covering oil sales from Petrocaribe.  They didn’t find any. They began asking: “Kot Kòb Petwo Karibe a?” (“Where is the Petrocaribe money?”)

The lack of a government budget for over two years, along with widespread strikes demanding unpaid wages — from hospitals to the courts, from tax offices to local government agencies — have left Haitians hungrier and angrier.  Scarcity of fuel means less food in the markets and less electricity.

The protesters in the streets made it clear that they blamed President Moïse.  And they were more than willing to take on those who support him.

Sen. Jean Marie Ralph Fethière of Moïse’s party — called the Party of Bald Headed Haitians  (PHTK) — was confronted by demonstrators while leaving Parliament on Sept. 23.  He drew his pistol, firing into the air and then the ground.  A parliamentary security guard was shot in the stomach and a well-known Associated Press photographer was hit in the cheek.

Demonstrators later surrounded the Parliament and disrupted its proceedings by pounding on lampposts with rocks and chanting. Some even managed to slip into the building and confront the parliamentarians directly.

While the cops were killing demonstrators, there were also reports of police stations being sacked. Vant Bef, a Haitian internet news service, reported on Sept. 27 that a police station in Saint-Marc was occupied by demonstrators, who took arms, bullet-proof vests, shields and office supplies.

On Sept. 28, when protesters seized the police station in Cité Soleil, the poorest neighborhood in Port au Prince, they took not only what was inside the building but also its tin roof, according to a video shown on France’s TV5.  In Delmas and Carrefour, both better-off neighborhoods, there was some looting, car windows were smashed and a few were burned. The supermarket Rois des Rois, a short distance from the National Palace, was also looted and burned. In Cap Haïtien,  the cops armed vigilantes who shot up demonstrators who were demanding the resignation and imprisonment of Moïse.

On Facebook and YouTube, some of the protests in Haiti have been covered in real time with uncensored interviews.  While everyone wanted Moïse to leave, a number of protesters raised the issue of the Haitian bourgeoisie’s support of foreign intervention, the lack of education, health care, the need for jobs and security, and the right to protest peacefully.

The spirit of the people comes across in these videos. They are confronting cops who shoot to kill, but still they run and dance through the streets, to the sound of rara (festival) bands, waving leafy branches of hope and demanding that President Jovenel leave. In Gonaïves, bands of protesters waved machetes.

Moïse was elected in 2016 in a process marked by very low turnout.  Hundreds of thousands of Haiti’s citizens had lost their IDs and the government was very slow in replacing them.  Still, the United States endorsed the election. Even though serious charges of corruption have been made against Moïse and his predecessor, Michel Martelly, and their party, the PHTK — even though the rights of Haitians to peacefully protest have been denied — the U.S. government and ruling class still support their guy in Port au Prince.

Without such support, he and his gang would be blown away.