In Montreal, Quebec province, Canada, more than 500,000 people marched on Sept. 27 in an effort to halt the climate crisis, in the largest strike in the city’s history, according to organizers. 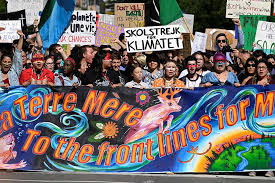 This and other Global Climate Strike events ended a week later, when 7.5 million people participated in 6,135 actions in 185 countries, along with over 70 national and international unions, and more than 800 organizations endorsing and marching. The Sept. 20-27 global mobilization was the largest turnout ever of people determined to defend the planet against exploitation and destruction. (globalclimatestrike.net)

Many marchers emphatically indicted the capitalist economy, corporate profit-making, and bought-and-sold politicians as responsible. In the U.S., some signs declared “Capitalism created climate crisis” and “Fossil fools.” Slogans in England pointed out “Disaster capitalism = climate apocalypse” and called for “System change, not climate change.” In Scotland, angry signs proclaimed: “The rich get richer, the planet gets poorer” and “Save the bees or I’ll break your knees!”

The leadership of Indigenous peoples in protecting the Earth and its beings was highlighted in Montreal, where Indigenous youth led the march. Rosalie LaBillois (Mi’kmaw), co-chair of the Assembly of First Nations National Youth Council, said: “We must ensure that our lands, waters, non-human beings, medicines and sacred sites are protected now and for the seven generations to come.” (turtleislandnews.com) 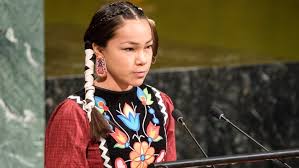 Indigenous peoples in close relationship with the Earth have led in protection of the environment for millennia before the “green movements” of the 20th century. The intensified exploitation of the planet in the last century has seen heightened measures led by Indigenous people.

The Sacred Stone camp created in 2016 to block the pathway of the Dakota Access Pipeline became an international rallying site for environmental activists.

Indigenous environmental activists in Central and South America have been battling settler and corporate seizure and exploitation of their lands for centuries, long before the Amazon began burning.

Many activists have lost their lives in that struggle, including Berta Cáceres of Honduras, winner of the prestigious Goldman Environmental Prize in 2015. Her death was linked to U.S.-trained Honduran special forces. Cáceres was opposing an internationally funded hydroelectric dam. (See “Behind the murder of Berta Cáceres,” WW, March 19, 2017.)

The Sept. 27 Global Climate Strike actions swept from Sweden to Morocco to Canada, from New Zealand to India to Italy. In Argentina, people marched in Buenos Aires to the Plaza de Mayo, location of historic resistance to oppression in that country. Around the rim of the imperiled Amazon, rainforest people demonstrated in Brazil, Bolivia, Ecuador and Paraguay. 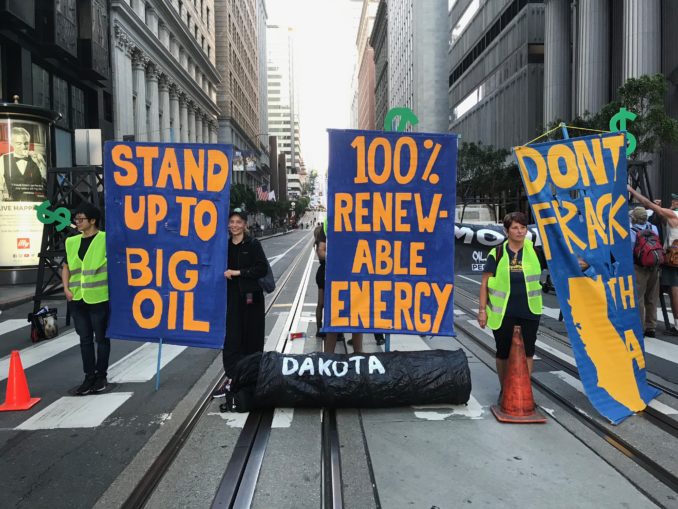 In the U.S., there were many determined rallies across the country, typified by two actions that took place on the East Coast and the West Coast.

In Atlanta, more than 200 people marched Sept. 27 in a militant demonstration calling for immediate solutions to the climate crisis. The group Extinction Rebellion chanted and took over streets, concentrating first on the Buckhead Business District, the ritziest part of city. After blocking traffic and taking arrests there, they moved on to the Midtown Business District. Once again they blocked a major intersection, taking 19 arrests in all. The youthful multinational group kept up their spirited action on a day with a record heat level in the high 90s.

On Sept. 25, climate strike activists closed down the main streets in the San Francisco Financial District and blocked entrances to major banks. Carrying signs and banners and chanting, “People, yes! Profits, no! Big Oil has got to go!” they shut down Wells Fargo, Chase Manhattan, Citibank and Bank of America for several hours. Seven people were arrested for blocking all the doors and driveways of Well Fargo, one of the biggest financial supporters of Big Oil.

Workers World Party participated in and helped organize a march from one of the blocked street intersections to a local Immigration and Customs Enforcement headquarters. Led by QUIT (Queers Undermining Israeli Terrorism), the group blocked the driveway used by ICE buses and strongly made the connection between the climate crisis and intensifying attacks on im/migrants. 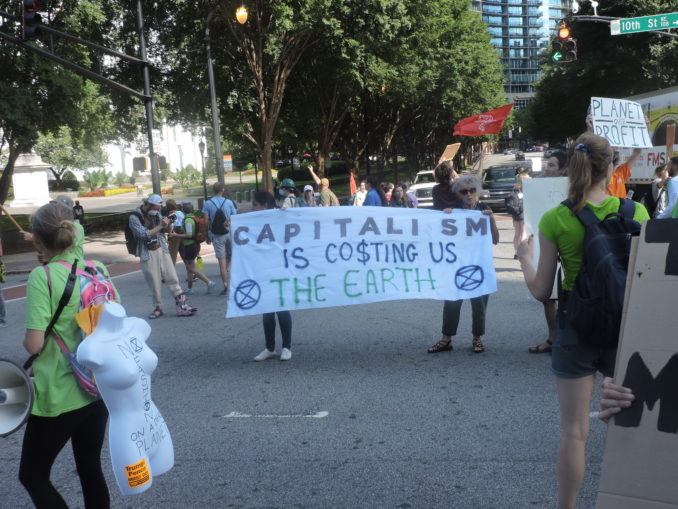 On the way to Atlanta’s Midtown Business District, Sept. 27.

On Sept. 27, hundreds of young people and their supporters picketed at the gates of Chevron’s corporate headquarters in San Ramon, Calif., in the San Francisco Bay Area. The young demonstrators not only called for Chevron to stop using fossil fuel, the youth demanded that Chevron stop poisoning the air and endangering the lives of poor communities of color surrounding their plants. Many banners held Chevron responsible for funding and profiting from wars for oil around the world.

A delegation of Youth Vs. the Apocalypse, the main organizer of the event, was invited behind the gates to meet with Chevron officials. The delegation reported back that, unsurprisingly, Chevron would not make any commitment to stop producing fossil fuel or polluting the air in poor communities around the bay.

Also contributing to this article were Kathy Durkin, Judy Greenspan and Jimmy Raynor.