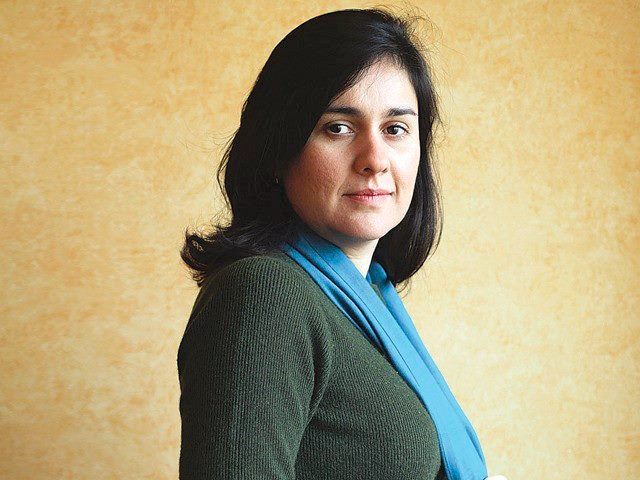 Hundreds of authors have publicly denounced the revocation of a German literary prize, the Nelly Sachs Award for Literature, from esteemed writer Kamila Shamsie because of her support for the pro-Palestinian Boycott, Divest and Sanctions campaign.

An open letter entitled “The Right to Boycott,” published Sept. 23 in the London Review of Books, lists over 300 prominent writers who back Shamsie and assert that the prize’s judges are punishing “an author for her human rights advocacy.” (Text and full list of signers:  tinyurl.com/y6t4tgqn) Over 100 authors signed the letter immediately after it was disseminated by Ahdaf Soueif and Omar Robert Hamilton, co-founders of the Palestine Festival of Literature.

It is “a matter of outrage,” stressed Shamsie, referring to rescinding the book prize awarded to her by the city of  Dortmund. Judges blatantly stated their reason for withdrawing the award on Sept. 18: Shamsie’s pro-Palestinian activism, especially her support for the BDS movement directed at the Israeli state.

The eight-member jury gave Shamsie the award “for her outstanding literary work” which “builds bridges between societies” on Sept. 6. Shamsie, who was born and grew up in Karachi, Pakistan, before moving to London, is a highly acclaimed  writer and won the Women’s Prize for Fiction in 2018 and was longlisted for the Booker Prize in 2017.

The Nelly Sachs prize is named for a German-Jewish Nobel Laureate poet and is given  to writers promoting “tolerance and reconciliation.” Except, apparently, when it involves supporters of the Palestinian people. In addition to stripping Shamsie of the book prize due to her principled activism, the Dortmund judges refused to publish her response when they issued the press release announcing the award’s revocation, although she requested they do so.

In her statement, Shamsie asserted: “It is a matter of great sadness to me that a jury should bow to pressure and withdraw a prize from a writer who is exercising her freedom of conscience and freedom of expression; and it is a matter of outrage that the BDS movement (modeled on the South African boycott) that campaigns against the government of Israel for its acts of discrimination and brutality against Palestinians should be held up as shameful and unjust.” (@Art4PalestineUK)

The author also rebuked the Israeli state: “In the just-concluded Israeli elections,  Benjamin Netanyahu announced plans to annex up to one-third of the West Bank, in contravention of international law, and his political opponent Benny Gantz’s objection to this was that Netanyahu had stolen his idea, this closely following the killing of two Palestinian teenagers by Israeli forces…In this political context, the jury of the Nelly Sachs prize has chosen to withdraw their award from me on the basis of my support for a nonviolent campaign to bring pressure on the Israeli government.”

In May, Germany’s Parliament condemned the BDS movement as “anti-Semitic,” a wholly false equivalence. Opposing the Israeli state’s brutality against the Palestinian people and violent occupation of the West Bank, Gaza and East Jerusalem is a principled position supported by millions of people worldwide.

The writers’ open letter cites 40 progressive Jewish organizations which say  blending anti-Jewish bigotry with opposition to Israeli policies and apartheid “undermines both the Palestinian struggle for justice, freedom and equality and the global struggle against antisemitism.” It also shields Israel “from being held accountable to universal standards of human rights and international law.”

These crimes include the fatal shooting by Israeli soldiers of the two youth mentioned in Shamsei’s statement — Ali al-Ashqar, 17, and Khaled al-Ribie, 14.  They were marching with 5,000 Palestinians at the Gaza-Israel border on Sept. 6. Army troops injured 76 protesters.

Another Sept. 18 Middle East Eye article reported that five Israeli armed guards killed a Palestinian woman who had “seemingly” entered the wrong end of the Qalandiya checkpoint in the Occupied West Bank, while trying to reach the bus section.  Israeli troops prevented medics from providing emergency care to her.

To support BDS, Shamsie will not allow her works to be published in Israel, as “[T]here is no Israeli publisher who is completely unentangled from the state.” She won’t “cross the global picket line formed by Palestinian civil society, which has asked [supporters] to not cooperate with organizations that are complicit with the Israeli state.” (mhpbooks.com, July 18, 2018)

“If a BDS-compliant Israeli publisher existed, I would be happy to have them publish my work,” said Shamsie. (Guardian, Sept. 19)