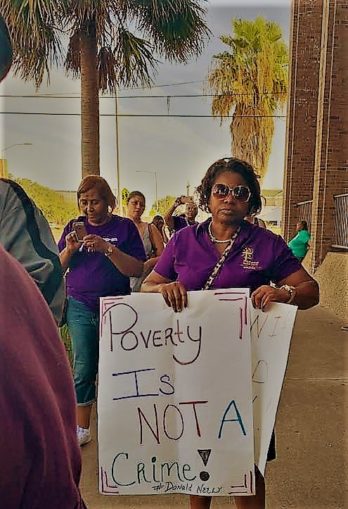 Some 350 demonstrators gathered here Sept. 15 to support Donald Neely, drawn in part by an Aug. 3 video that garnered national attention. The video showed two police officers on horseback leading Neely by a rope. The disrespect shown this 43-year-old Black man aroused widespread outrage. Police documents showed they knew Neely as a homeless, mentally ill person who was not at all dangerous before the incident ever took place.

Demonstrators came together from across the state in the scorching September heat to call on law enforcement to release body camera footage from the incident and to drop all charges against Neely. Their signs read that poverty and mental illness should not be a crime and made demands for dignity and justice. Those who gathered in Neely’s name rallied in a local park and then marched along the same route police had forced him to take.

The community and all who understand the historical context of the area know that Neely’s blatant mistreatment is part of the legacy left by slavery. Galveston is a  deep-water port on the Gulf Coast, with the oldest city police force in Texas. The city’s law enforcement origins can be traced to slave patrols.

Much like the surrounding areas, Galveston also has a well-documented history of leasing convicts for unpaid labor in the post-emancipation era. Convict leasing was a system comparable to slavery in which vagrancy laws were weaponized against poor Black people in particular. Laws were used by officers to arrest people — often for little reason — and use them as an expendable labor source under harsh conditions for the profit of the prison system.

Everyone who showed up knew that history and also understood and spoke to the local community’s legacies of resistance and the inhabitants’ position as collective carriers of history. Galveston is the birthplace of Juneteenth, which is the oldest nationally celebrated commemoration of the end of U.S. slavery on June 19, 1865.

Speakers at the rally called for a moment of silence as the Sept. 15 day of action since it was also the anniversary of the day in 1963 when a bomb set in a Birmingham, Ala., church killed four young Black girls — Addie Mae Collins (14), Cynthia Wesley (14), Carole Robertson (14) and Carol Denise McNair (11) — and left a fifth young girl, Sarah Collins Rudolph, who still carries the traumatic history of that day. (For the story of the fifth girl, see tinyurl.com/y6h2jnfj/).

Neely’s legal counsel, Houston-based civil rights attorney Ben Crump, reminded Neely’s hundreds of supporters: “When they drug him down the center of town, it was like they drug all of us.” Crump then led a chant of collective resistance, “Pull the rope, for Donald Neely!”

Galveston knows the ghastly legacies of colonial inhumanity and raises its vital legacies of resistance in defiance. The community supports the ongoing legal struggles of Neely and collectively carries him. And he ain’t heavy.