This is a slightly edited version of a statement issued by BAYAN-USA, an alliance of 26 progressive Filipino organizations in the U.S. representing students, scholars, women, workers, artists and youth. 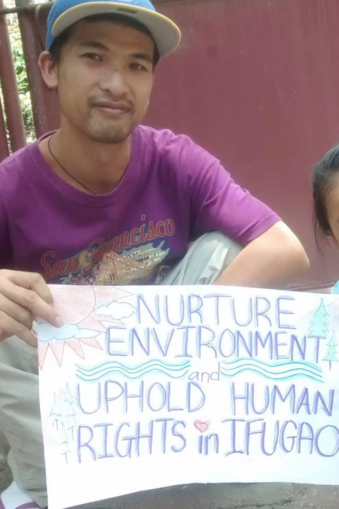 BAYAN condemns in the strongest possible terms the shooting of another human rights defender, Brandon Lee, of the Cordillera Human Rights Alliance (CHRA). The U.S.-Duterte regime’s Oplan Kapanatagan, like other counterinsurgency programs patterned after [those run by] the U.S. State Department, continues to target and harm, if not murder, activists in the legal and aboveground mass movement.

Brandon’s rigor in social investigation and community immersion makes him one of the most reliable journalists of Northern Dispatch. His activist journalism encourages a deep and broad understanding of the lives of the most productive yet oppressed people in the Cordilleras and beyond. His profound appreciation of the role of peasants in forging a better society led him to learn and actually take on paralegal work with the Ifugao Peasant Movement (IPM).

On Aug, 6, Brandon was shot in front of his house. In his years as an activist, Brandon and his family have lived with the people of the community as they play an active role in the struggle for people’s rights. …

The current spate of political [shootings and] killings in the Philippines follows a methodical approach: First, [President Rodrigo] Duterte unilaterally cancelled the Peace Talks with the National Democratic Front despite earlier identifying peace as his preferred presidential legacy. The U.S. State Department-controlled Armed Forces of the Philippines (AFP) tried to sabotage the 2016-2017 Peace Talks. Duterte’s shutting down of the [current] Peace Talks was his signal to U.S. leaders that the business of puppetry in the Philippine bureaucracy is on as usual.

The second step the Duterte regime took was to consolidate dependence on U.S. imperialism and the Philippine military. [Duterte] did this by suddenly declaring an entity — the CPP-NPA, which he once recognized as a rival government to forge peace with — as  a “terrorist” group.

With the arbitrary labeling of a revolutionary underground organization like the CPP-NPA as terrorist, the next step to quelling the growing resistance, mounted by the people within the purview of their civil and political rights, was facilitated. …

This step-by-step fascist repression of progressive activist work [was used to warrant] frequent surveillance of Brandon’s residence for weeks before the shooting … as well as the offices of IPM and Justice and Peace Advocates of Ifugao, of which he is also a member.

[BAYAN] calls on all peace advocates and human rights defenders to seek justice for Brandon and provide the assistance he needs during these very dark times. BAYAN assures its full support to Brandon’s family, friends and comrades in the various organizations he serves.

Brandon’s contribution to the historically robust and militant struggle of the people of the Cordilleras remain incalculable. His survival and recovery from this brutal state attack can only strengthen our collective fight against tyranny.