CWA District 1 and Association of Flight Attendants are fired up 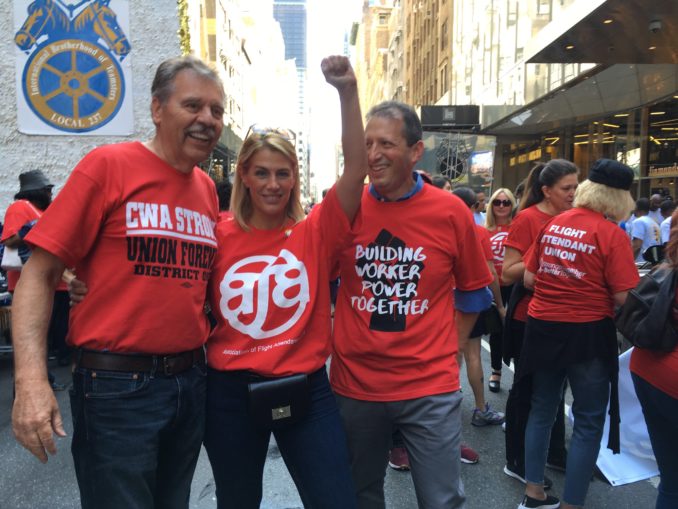 Nelson is the union leader who confronted President Trump on the lockout he imposed on workers during the 35-day federal government shutdown of 2018-19. With Nelson urging tough action, AFA issued a joint statement, along with unions representing U.S. pilots and air traffic controllers, that air travel had become unsafe, as unpaid air traffic controllers and Transportation Security Administration workers refused to show up for work, shutting down air travel and some airports. The day after Nelson’s public call for a general strike, led by the flight attendants, Trump’s shutdown ended.

United Auto Workers members brought a message of international solidarity with immigrant workers and their families to New York City’s Labor Day on Sept. 7. Marching behind the banner “Solidarity has no borders – No Ban – No Wall” and carrying signs that read “Close the Camps! Amnesty for All! No Deportations!” the contingent stopped outside Trump Tower, where their loud chants of “No Trump, No KKK, No Fascist USA!” rang up and down Fifth Avenue. 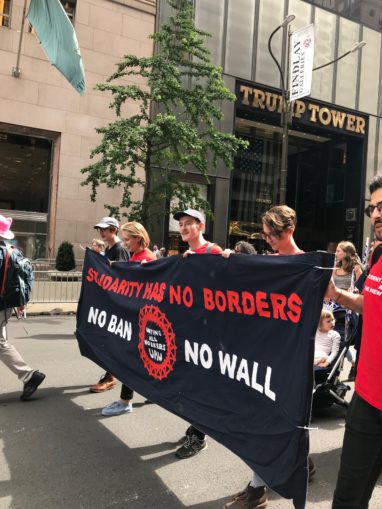 In a call to action, the National Writers Union, UAW Local 1981 urged union members at the march to join the contingent to support “tens of thousands of workers and their families, locked up and locked out at the U.S./Mexican border … to demand an end to racist raids and deportations against immigrants already here, and to abolish ICE [Immigration and Customs Enforcement]. These are not slogans we raise once a year, but demands we fight for all year long.”

The Legal Services Staff Association, UAW Local 2320 has taken a strong stand against ICE raids of immigrant poultry plant workers in seven Mississippi towns. (tinyurl.com/y4q36ow6) UAW Region 9A has seen an influx of new, young members in New York and New England due to organizing among graduate students, museum and cultural workers, clerical and technical workers, and more. Their militancy and energy enlivened the union’s contingent this year.