Alessio Arena, secretary general of the Italian communist group Fronte Popolare (Popular Front), spoke to a full house at the Solidarity Center in Manhattan on Sept. 5 about the role of European imperialism in the world and the central role of German imperialism in controlling the direction of the European Union. 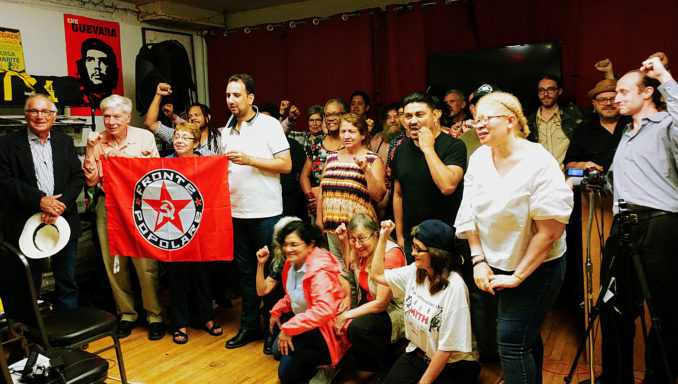 Alessio Arena (right) holding Fronte Popolare banner, with some of the audience at Sept. 5 forum.

For U.S.-based anti-imperialists it was educational to examine the role of imperialism from a perspective that doesn’t place Washington at the center of every struggle, despite the predominant military role of the Pentagon in the world.

As Arena pointed out, the EU is the largest single economic market in the world. It plays a reactionary and oppressive role in Africa and Central Asia, sometimes allied to the U.S. and sometimes in competition with the U.S., but always against the interests of the working class and all oppressed nations.

One example Arena gave of the competition is the EU countries’ push to continue the pact reached with Iran regarding nuclear arms at a time when the current U.S. government has broken that pact. Another was his description of the complex relationship of German imperialism with capitalist Russia.

Much of the Sept. 5 talk can be read in an article by Arena published in the Sept. 5 Workers World (read online at tinyurl.com/yymux8cs).

Workers World Party and the Freedom Road Socialist Organization, both of which have fraternal relations with Fronte Popolare, sponsored the meeting. Arena thanked both organizations and expressed the wish to continue to share experiences. He expects that all the experiences of organizations with communist goals in this difficult post-Soviet period will be useful in building a new movement striving for socialism and communism worldwide.

FRSO member Michela Martinazzi introduced Arena, while Blair Bertaccini provided consecutive interpretation of Arena’s talk from Italian to English. Sara Flounders of WWP added an announcement about the many public demonstrations planned for late September at the United Nations, particularly those in mass response to the climate crisis. Richard Kossally chaired the meeting.