This year marks the fifth anniversary of the disappearance of the Ayotzinapa 43, an event which unleashed a movement for justice in Mexico that inspired the world.

On Sept. 26, 2014, six people were murdered and 43 students from the Raúl Isidro Burgos Normal Rural School in the small community of Ayotzinapa in Iguala, Mexico, were disappeared. 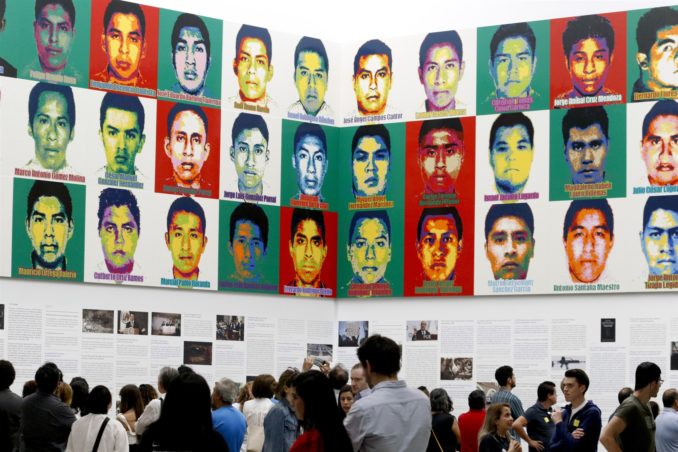 The case soon became known as the Ayotzinapa 43, as the families and indeed the nation organized and demanded to know what had become of the “normalistas.”

The students — dedicated activists and revolutionaries — had commandeered several buses to travel to Mexico City to participate in a commemoration of the 1968 Tlatelolco Massacre. Commandeering buses in Mexico for political work is common and an example of how strong the resistance is in that country.

The Burgos Normal Rural School, activists relate, has a long history of student and teacher activism. Subjects are taught from the point of view of the working class, not the bourgeois class. It is not a surprise that the students left southern Mexico to go to Tlatelolco.

But they never arrived.

Their disappearance sparked a national movement. Families of the Ayotzinapa 43 traveled throughout not only Mexico but the U.S. as well. Throughout their tours and in all the demonstrations, the movement declared, “Fue el estado!” (“It was the state!”)

Indeed, all the facts pointed to a state coverup. The movement forced the government to allow an independent investigating team to enter the country to examine the remains and the crime scene. But their efforts were stonewalled. Bodies found in the area with sickening proof of mutilation and torture did not add up for the investigators as those of the 43.

Five years after the incident, justice remains as intangible as it was back then.

Mexico: in the shadow of the imperialist beast

Mexico shares a 2,000-mile border with U.S. imperialism. Nothing that happens there can be separated from that fact. It is in imperialism’s best interest that capitalist powers reign in Mexico — which means instability, repression and exploitation.

This is why a lucrative drug industry is so strong in Mexico. It explains why drugs can cross capitalist borders easily, while workers cannot.

Independent journalists and human rights activists point out that there is indeed a coverup in the case of the Ayotzinapa 43.

Anabel Hernández, author of “A Massacre in Mexico: The True Story Behind the Missing Forty-Three Students,” writes: “This case is about how the army, the federal police, and the federal government had been protecting organized crime in different parts of Mexico — and how in trying to protect organized crime they sacrificed these 43 students and tried to cover up what really happened that night.” (Los Angeles Magazine, April 11)

From Mexico City, Associated Press reporter Maria Verza wrote Sept. 3: “One of the main suspects in the 2014 disappearance of 43 teachers’ college students in southern Mexico has been acquitted, a human rights attorney said, as justice remains elusive for one of the darkest moments of the country’s recent history. Santiago Aguirre, director of the human rights center known as Prodh and a lawyer for victims’ relatives, said the judge absolved Gilberto López Astudillo due to ‘insufficient evidence.’” The attorney said the case was “marred by sleaziness, human rights violations and irregularities.”

The election in 2018 of Andres Manuel Lopez Obrador (AMLO) as president of Mexico brought high expectations that his administration would not be more of the same: repression, coverups and so on.

Hernández states that AMLO promised amnesty to the corrupted groups and said he would not prosecute cartels. She said that AMLO does not “want revenge.”

Hernández, however, believes that “the truth is there. The government [behind] Enrique Peña Nieto [president of Mexico at the time] tried to destroy all the evidence [from the night the 43 students disappeared], they tried to cover the truth but despite their efforts, the truth is still there.”

Although the wheels of justice are dragging, AMLO did say he would challenge the decision to release the main suspect.

Upon his election, Lopez Obrador established a truth and justice commission to investigate the case. As of now, this commission has not uncovered any new information.

What is encouraging is that the families of the Ayotzinapa 43, as well as the people themselves, continue to demonstrate what the Mexican people have long expressed: The masses will never give up.