Despite overwhelming U.S. opposition to President Trump’s ongoing attacks on migrant workers, on Aug. 21 he announced plans to detain migrant children and families for even longer than they are incarcerated at present, using a new “indefinite detention” rule.

Furthermore, plans are for detention centers to be run exclusively by Immigration and Customs Enforcement rather than government-licensed shelter facilities.

There are currently two laws that protect migrant children and families: the Trafficking Victims Protection Reauthorization Act of 2008 and the Flores Agreement of 1997.

Clearly, these have not worked perfectly as, not only under Trump, but also under Democratic administrations, violations of these protections have occurred.

This is not surprising to anti-capitalist activists. As long as the capitalist system is intact, laws or agreements won through struggle will be violated, as the ruling class aims to control, rather than protect, the working class.

But Trump has taken his disdain of existing laws to a whole new level.

Trump’s hatchet men have announced a sweeping plan to detain migrant families and children for even longer periods of time. The administration said this is happening in order to deter migrants and their children from coming into the U.S.

The current racist administration wants a final regulation that would overhaul the immigration detention system altogether — to fit its standards. 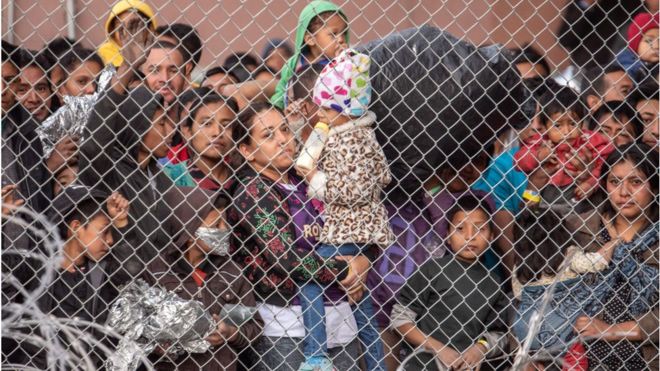 Since 1997 the Flores Agreement has set standards for the treatment of migrant children in custody. It stated that decent housing, medical care, hygiene, education and nutrition should be guaranteed.

The agreement originates from a 1987 court case in which Jenny Flores, 15 at the time, and three other migrant children filed a class action lawsuit over horrible detention center conditions. The children reported they were put in razor-wired housing with adults they did not know. Abuse and routine strip searches were carried out on both children and adults.

These Salvadoran children had arrived in the U.S. much like migrants today — as a result of imperialist policies. The U.S. had sponsored and funded a civil war in their Central American nation. Over 75,000 people died, their blood on the hands of the U.S. government.

Additions to the original Flores Agreement held that the U.S. government was prohibited from detaining families with children for more than 20 days. (CBS News, Aug. 21)

Clearly this has been violated over and over again under the Trump administration.

From day one of Trump’s election in 2016, he has complained about the Flores Agreement. In 2018, the Department of Homeland Security published a regulation giving DHS more leeway in detaining families and children for longer periods. It also modified the standards of care for unaccompanied children.

The new administration plan could mean that the Flores Agreement would become obsolete altogether. Under Trump’s new policy, there would not be a limit to the number of days families with children could be detained. The administration wants to circumvent the 20-day detention limit in Flores by establishing a federal licensing system. This would then authorize facilities that the government could use to detain families.The new policy is expected to be challenged in court.

CBS News reported: “Officials have maintained that migrant adults bring their children with them to the U.S. because they know immigration authorities cannot detain families with children for a prolonged period of time. The administration hopes to eliminate what it sees as an ‘incentive’ by detaining families until the end of their immigration proceedings.” Since immigration proceedings have no predetermined end-point, detentions could effectively be indefinite.

The tremendous hardship and dangers that migrants face upon leaving their countries are well known.

No parent would willingly bring their child on this hazardous trip unless they absolutely had to. The only “incentive” is survival.

Furthermore, news about conditions in the concentration camps have spilled over this country’s borders and around the world.

For the Trump administration to imply that prolonged detention will deter migration is a bold-faced lie. Since Trump was elected, at least seven migrant children have died in U.S. custody or shortly after being released. It could be more at any moment.

Yet how many times has a politician or someone in the news said in reference to these caged children: “This is not America”?  It is as if U.S. history started in 2016.

Conditions — from rotten to worse

In reality, U.S. history is full of atrocities exactly like the caged migrant children. There is the mass incarceration of Black and Brown youth right now, making the U.S. the country with the largest prison population in the world.

Africans being enslaved; the theft of the U.S. southwest from Mexico; the robbing of Native children from their communities; the internment of Japanese Americans during World War II —  these are examples of exactly what this country is all about.

Yet a U.S. Senator from Oregon, Jeff Merkley, seemed genuinely surprised and outraged at what he witnessed at the detention camps, though he himself was denied entry into the camps. Perhaps the fact that a U.S. Senator was not allowed into a government-run facility opened his eyes.

According to publicity about his recent book, “America Is Better Than This,” Merkley saw “mothers and children, newborn babies and infants, stranded for days on border bridges in blistering heat or locked up in ice-cold holding pens. There were nearly 1,500 boys jammed into a former Walmart, a child tent prison in the desert with almost 3,000 boys and girls, and children struggling to survive in … border towns after they were blocked from seeking asylum. Worst of all, there were the children ripped out of their parents’ arms and sorted into cages in some profoundly warped attempt to discourage migration.” (Facebook page: Strand Bookstore)

The Trump administration is planning right now to increase this detention and have absolutely no checks on conditions at these concentration camps. The impact on migrant children and families will get worse — much worse than already reported.

Is this administration more of the same? Is it settler colonialism and imperialism 4.0?

Or is it the beginning of something very new to U.S. politics: outright fascism at home?

It should be noted that Republican President George H. Bush used the 2001 bombing of the World Trade Center to create the Department of Homeland Security, which at the time evoked Nazi Germany to many Jewish activists.

Bush also began the criminalization of migrants when his administration abolished the Immigration and Naturalization Service, placed immigration under the DHS and began treating migrants officially as criminals. Crossing into the U.S. was no longer a minor civil infraction, but a criminal action.

Nonetheless, Trump has taken these kinds of policies to a heightened new level — so much so that even Bush, the butcher of Iraq, is appalled.

Many pundits have compared Trump to Hitler. Both, for example, spout racism and anti-Semitism, favor mass detention and deportations, and revere closed borders.

So is Trump something new altogether in the U.S.? Or is he more of the same but on steroids? Or has the ruling class 1% decided to allow a fascist to rule the 99% since capitalism is at its last breath?

These questions and more should be studied and discussed among the left and answered to the best of our ability — especially as we approach the 2020 elections.

But in the meantime, the war on migrants, without a doubt, is a test for the working-class movement.

If Trump is allowed to win the war against migrants, he will go on to wage war on even the likes of Sen. Merkley, who could end up experiencing the fascist terror many people of color have lived under all their lives.

Trump must not be allowed to win the war on migrants.

Fortunately, every day more and more people are taking to the streets to fight back.