One week after the now infamous Aug. 13 Philadelphia police assault and 7.5-hour siege of the African-American Tioga neighborhood, new facts are coming to light. Maurice Hill, whom police targeted and now allege shot six officers, had no outstanding charges, nor was his address on the police warrant.

The alleged police search warrant was for a building two houses from 3716 North 15th Street where Hill rented an apartment. Police now claim they did a “safety sweep” and raided both houses at once because they believed “drugs or weapons” were going into Hill’s house “in a duffel bag.” (Inquirer.com,  Aug. 15)

Police have offered no evidence that drugs were found in Hill’s apartment. 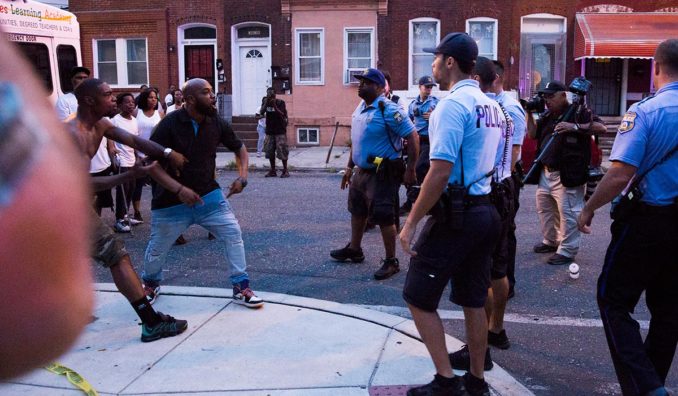 Lawyers with the Defender Association of Philadelphia point out that police officers searching a property without a warrant could constitute an illegal search.

In the same article, DAP attorney Bradley Bridge said that officers “would need to get a warrant for the second location. That’s what the Fourth Amendment mandates.” He noted that extenuating or emergency circumstances could possibly justify failure to obtain a warrant, but allegedly witnessing someone carry a duffel bag (contents unknown) into a house does not constitute an emergency.

Tioga neighborhood residents call the regular police practice of checking people for warrants “Jump-out Tuesdays.” Less than a week after the shootout, one resident reported seeing 13 police cars and increased random stops of people in the neighborhood. Another resident stated that police share the blame for what happened, noting that they knew about drug dealing on the block but allowed it to become a serious problem. (Inquirer.com, Aug. 22)

According to sources cited in the Aug.15 article, officers from the Narcotics Strike Force broke down the front doors at Hill’s address, ran upstairs, into the basement and into his kitchen when Hill allegedly opened fire — after he was clearly under attack.

Without a valid warrant police had no justification for attacking Hill, regardless of any previous arrest record he might have had and regardless of the outcome.

And they had no justification for carrying out this occupation of a Black neighborhood.

They had no justification for preventing parents from picking up their young children for hours from two daycare centers near the shootout site. Nor for preventing parents from returning home to their school-aged children, who had been home alone for hours because of the police blockade. Nor for keeping people from going to work, securing food or engaging in any normal activities prevented by the police blockade.

When the local and eventually national media covered the standoff, police were portrayed as “brave,” “under attack” and “heroes.” Hill became the “gunman.” No one is saying whether the shots that injured the officers, none seriously, were fired by Hill or fellow police.

Corporate media portrayed the Tioga section of Philadelphia as a “bad neighborhood.” Yet wealthy, white, suburban neighborhoods — homes to the CEOs of major pharmaceutical companies convicted of profiting off the promotion of OxyContin — are never the targets of police raids or labeled “bad neighborhoods.”

And the media have yet to acknowledge the brutal history of Philadelphia police who assaulted the Black Panther Party in 1969, who waged an 18-month siege of the Powelton Village neighborhood leading up to an assault against the MOVE organization in 1978, and who bombed a MOVE house, murdering 11 men, women and children in 1985.

Even Philadelphia District Attorney Larry Krasner is hedging his bets on whether the police assault is defensible. He would not disclose if Hill’s name was on the warrant and declined to comment about the legality of the police search that led up to the standoff.  Krasner claimed that the alleged gunman “needed to be off the streets,” but essentially admitted that, while Hill had a long record, he had no open cases since January 2018.

In other words, police had no justification for targeting Hill and DA Krasner had no grounds for claiming, in the Aug. 15 Inquirer article, that he “needed to be off the streets.”

To end the siege, Hill eventually contacted a lawyer and arranged to surrender, hoping that the international media spotlight might prevent his death at the hands of Philadelphia police.

Yet under Pennsylvania’s “Castle Doctrine,” Maurice Hill had every right to defend himself, and former progressive attorney Krasner understands this well.  Workers World was in the courtroom in 2013 when attorney Krasner successfully defended Philadelphia community activist Askia Sabur against multiple felony charges leveled by the police after they viciously attacked him in 2010.  Police claimed they had been injured when Sabur defended himself.

Krasner’s argument then — picked up by presiding Judge Roger Gordon — was that under Pennsylvania’s Castle Doctrine, self-defense is justified against police using unreasonable force and putting a defendant’s life at risk. Gordon noted that a defendant cannot be found guilty of resisting arrest for arguing with officers.

Krasner is well aware that the state’s case against Hill is questionable and told the media the case would be delayed because the investigation of collected evidence could take months.

Krasner’s withholding evidence for “months” shows just how out of touch he is with Philadelphia’s most oppressed communities. Much of the “evidence” includes the impounded possessions of Tioga residents who, like Hill, are victims of the police attack.

Their cars, riddled with bullets, were seized as evidence with no indication of when they will be returned. Many residents rely on their vehicles for work. They blame police for creating the siege, then damaging their property and taking no responsibility for repairs.

One mother of 10- and 12-year-old children described their terror of being trapped alone for hours until police allowed her into her home at 1 a.m., where she found her children crying. A week later they still don’t want to go out to play.

“This block is full of children, always,” the mother told Inquirer.com on Aug. 22. “They play basketball, ride bikes, they eat water ice here, but they won’t come outside no more.” According to the paper, “She keeps thinking about how police treated her during the shooting, saying police didn’t identify themselves or make sure residents were safe. Their whole approach, she said, was wrong.”

Other Tioga residents interviewed expressed sympathy with their neighbors, the alleged “drug dealers,” who were picked up as a result of the police siege.

Block captain Cynthia Muse credited some of the arrested men for their involvement in the neighborhood, including holding barbeques and block parties and putting up a basketball hoop low enough that even the youngest children could play. Muse labeled the massive police presence in the neighborhood as “martial law.”

Freelance journalist Melissa Simpson, who grew up near the Tioga neighborhood, addressed social media support for Hill in the Aug. 22 article: “This is a guy who’s doing something we’ve never seen before: he’s shooting at cops … and he came out alive. That’s unprecedented.” As for the lack of community concern for the injured police, Simpson noted, “It’s really difficult to have empathy for oppressors.”