Workers have occupied the Harland and Wolff shipyard in the north of Ireland since July 29. They are fighting to save the last 132 jobs at the 166-year-old Belfast company, which at its peak during World War I employed 35,000 and is most famous for building the Titanic. The workers are represented by two unions, Unite and GMB. 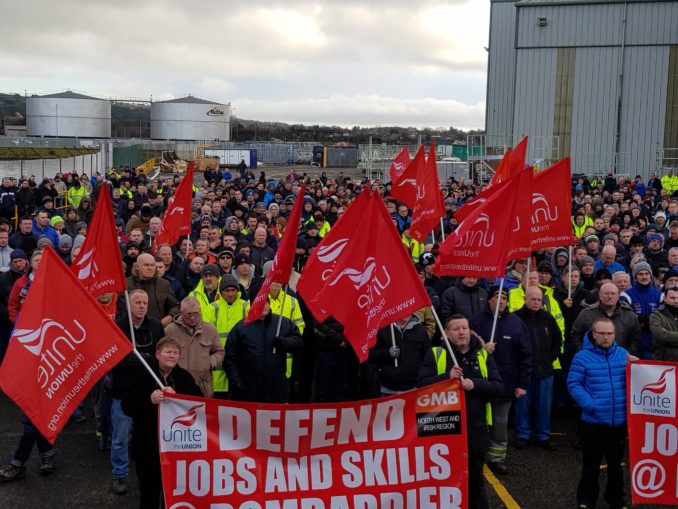 Last year the Norwegian parent company, Dolphin Drilling, announced it would be selling Harland and Wolff. With no prospective buyers, workers learned in July the yard would be taken over by administrators. Rather than see the yard closed and stripped of its assets, they began an occupation.

The unions are calling on the government to “re-nationalize” the shipyard, which the British government owned and operated from 1977-89. They have demanded it be kept open to build the machinery needed to produce renewable energy. The skill sets are already in place; the handful of workers no longer build new ships, but have constructed offshore wind energy and tidal power equipment.

The workers took their fight to Stormont, site of the Northern Irish Assembly, on July 31. Newly elected British Prime Minister Boris Johnson, considered a British version of Trump, was present but declined to meet with the workers. A letter was delivered to Johnson, who has dismissed this struggle as “a commercial issue.” (bbc.com, July 30)

The administrators, BDO, who took over the shipyard Aug. 6, announced that potential buyers had been lined up. This prompted one worker to describe the mood as “buoyant.” (bbc.com, Aug. 19) However, until a concrete deal to keep them all on the job materializes, workers are continuing the occupation.

A mass rally Aug. 23 drew broad support from other unions, while Belfast City Council was meeting to address the situation.

Left parties Sinn Fein, People Before Profits and the Green Party have expressed support for the occupation, as has Mary Lou McDonald, Sinn Fein’s current national leader for both the Republic of Ireland and the British-occupied North. The pro-British Democratic Unionist Party merely expressed “disappointment … that there has not been a resolution and rescue package that we had advocated for and that we had hoped for.” (Belfast Telegraph, Aug. 5)

A history of class struggle

The shipyard occupiers are continuing their city’s long history of labor resistance to capital, including mass strikes in 1907, 1911, 1919 and 1932. The most famous Irish labor leaders, James Larkin and James Connolly, spent years in the Belfast working-class movement. Irish labor has long been intertwined with the struggle to end British occupation altogether and establish a free and independent Ireland.

In 2009 Belfast autoworkers occupied a Visteon plant slated to close. Visteon, created in 2000 when Ford spun off a number of parts plants, subsequently lowered wages and sold or closed a majority of its plants. The Irish workers, along with their counterparts who also occupied two English plants, won big improvements in their severance packages.

Once again, the workers in Belfast are advancing the global class struggle by employing the occupation tactic. Seizing the bosses’ property — as opposed to just walking out and putting up a picket line, as courageous as that can be — represents a higher degree of class confrontation.

As Workers World Party’s late founder and chairperson, Sam Marcy, wrote in the 1984 work “High Tech, Low Pay”: “There are means by which the workers can go beyond the established capital-labor relationship, that is, the framework of capitalist exploitation. They can seize and occupy the plants and thereby force a new and different type of crisis on the ruling class, instead of remaining in a narrow, often frustrating endurance contest between the employers and the workers.”

The fight of these conscious Irish workers to save their jobs is also part of the fight against climate change. However things are resolved, this shows the potential for a movement to politically unite the right to a job with the right to a clean, healthy environment — and to take on capitalism.

The struggle recalls the the poem by Connolly, who was executed by the British after the famous 1916 Easter Rising: “We Only Want the Earth.”