Worldwide protests have denounced the unprecedented number of fires burning in the Amazon rainforest, enabled by the policies of Brazil’s president, Jair Bolsonaro. Some 25,000 fires have been burning in the world’s largest rainforest, which is home to more than 350 Indigenous groups who have resisted encroachment on their lands for centuries. Scientists consider the oxygen-producing capacity of the Amazon’s plant life to be crucial to counteracting global warming. 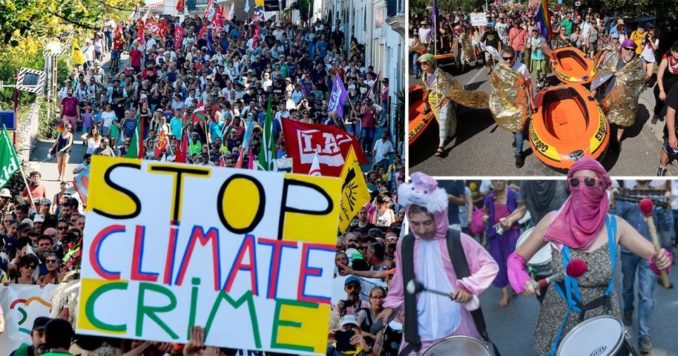 Protest against G7 summit in France on Aug. 24.

The number of fires in the region is the highest in nine years, and 35 percent more than the average of the last eight years, according to Brazil’s National Institute of Space Research. In the Brazilian state of Rondônia, hospital admissions for respiratory problems have tripled. The fires have spread to Bolivia and Peru.

Even before Bolsonaro assumed the presidency, the issue of deforestation had been of great concern to local Indigenous peoples and environmental activists around the world. In fact, the agricultural land that most of the fires were likely begun on, in order to prepare for the soybean and corn planting season, were created through deforestation of the region.

Describing one such area, Matthew Hansen, of the Global Land Analysis and Discovery laboratory at the University of Maryland, said, “Brazil has turned certain states … into Iowa. You’ve got rain forest, and then there’s just an ocean of soybean.” (New York Times, Aug. 24) Other fires appear to have been set with the explicit purpose of more deforestation.

Bolsonaro has long been a critic of the country’s environmental regulations, calling the fines associated with them an “industry” that should be abolished. These laws are supposed to protect parts of the Amazon but in actuality are sparsely enforced.  The New York Times found that “enforcement measures” by Brazil’s main environmental agency fell by 20 percent in the first half of this year.

While running for president, Bolsonaro pledged to enable industry to have greater access to protected Indigenous reserves and to merge the agricultural and environmental industries. Many say that his ascendency to the presidency has given the green light to loggers and landed agricultural elites to clear the land for more capitalist profit making. According to Resumen Latinoamericano, at least 68 protected areas have now been affected by the fires.

In the past week Bolsonaro and his right-wing environmental minister, Ricardo Salles, have faced massive protests in multiple Brazilian cities in response to the fires. Indigenous peoples living inside the Amazon have vowed to continue defending their lands. Handech Wakana, an Indigenous leader, told Reuters: “Over the years we have resisted here, when there was no access by road, when electricity arrived, when the invasion happened. And with each passing day we see the destruction advance: deforestation, invasion, logging.” (telesurenglish.net, Aug. 23)

Capitalism is to blame

Brazilian embassies have been targeted for protest in several countries. On Aug. 23, during a meeting of the Group of 7 in Biarritz, France, the president of France, Emmanuel Macron, threatened to block a trade deal between Europe, Brazil and three other South American countries.

U.S. President Donald Trump offered, in a tweet, to assist Brazil in combating the fires. In what seemed to be direct contrast to Macron’s warnings, Trump asserted, “Our future Trade prospects are very exciting and our relationship is strong, perhaps stronger than ever before.” (politico.com, Aug. 23)

But “assistance” from the U.S. usually comes with imperialist intervention and occupation. At the G7 meeting, Trump didn’t bother to attend the discussion on climate and biodiversity held on Aug. 26 where the Amazon fires were a big topic. Out of that meeting, a $20 million pledge was made as a band-aid solution to fund Amazon countries to battle forest fires and to launch a long-term initiative to protect the rainforest. In 2017, Bolsonaro lauded Trump’s decision to pull the U.S. out of the Paris Agreement on Climate Change.

After the fires spread to neighboring Bolivia, President Evo Morales announced an extensive plan of action, stating: “We are no longer forced to submit to ‘international aid.’ ” The measures included the use of a 747 Supertanker, six helicopters and 10 light aircraft to douse the fires; the dispatch of extra troops as reinforcement for firefighters; and the formation of an emergency cabinet to address the situation. On the first day the fires hit Bolivia, Morales delivered emergency food and two helicopters to evacuate affected areas.

After initially claiming that the fires might have been set by nongovernmental organizations and that the criticism against him was part of a foreign conspiracy, Bolsonaro finally made an abrupt reversal of his do-nothing stance on Aug. 23. He announced a military operation to contain the fires in six Brazilian states, claiming in a televised address that his government would have “zero tolerance” for environmental lawbreaking.

What is clear is that it will take a people’s movement to stop the continued environmental devastation affecting the lives of every person on the planet. The Global Climate Strike from Sept. 20-27 will be one step forward. Ultimately, however, capitalism itself must be destroyed.