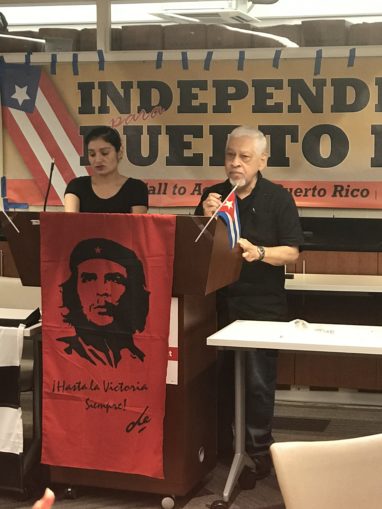 A standing-room-only crowd attended the annual July 26 commemoration  organized by the New York-New Jersey Cuba Si Coalition and hosted by the New York State Nurses Association in Manhattan on July 27.

July 26 marked the 66th anniversary of the attack on the Moncada barracks led by Fidel Castro Ruz and dozens more revolutionary forces in an attempt to overthrow the government of the brutal pro-U.S. Cuban dictator, Fulgencio Batista. Though the attack failed militarily, it helped to lay the political basis for the triumph of the Cuban Revolution less than six years later on Jan. 1, 1959.

Speakers included the Cuban Ambassador to the United Nations, Ana Silvia Rodriguez; Ed Ortiz, from Call to Action on Puerto Rico; Gail Walker, director of IFCO/Pastors for Peace; William Camacaro, from the Venezuela Bolivarian Circle; and others.  The program was co-chaired by Frank Velgara, from Socialist Front of Puerto Rico, New York Committee, and Ana Marie Cardenas, law student at the City University of New York. Many of the speakers linked the impact of the Cuban Revolution to other important struggles against U.S. imperialism, especially in Puerto Rico and Venezuela.

BombaYo, a cultural group of percussionists and dancers, performed the ancestral rhythms of Bomba, an African-derived music and dance tradition developed in Puerto Rico.