A massive throng of people passed through the center of Caracas on July 13 to demonstrate their rejection of the United Nations report on Venezuela, presented by Michelle Bachelet, U.N. high commissioner for human rights. A tropical storm soaked the marchers as they made their way to Miraflores Palace. 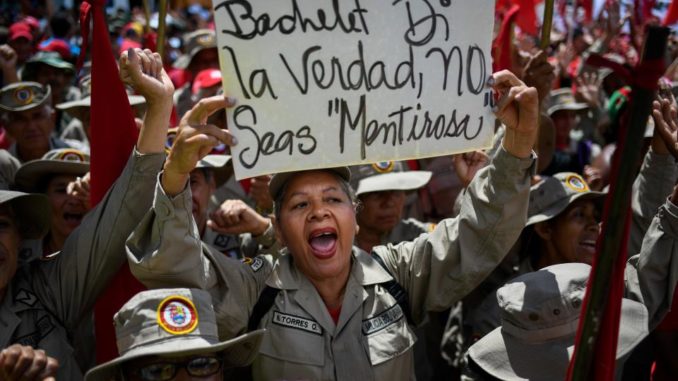 A member of the Bolivarian militia denounces the U.N. High Commissioner’s negative report on Venezuela, during a July 13 march in Caracas.

Meanwhile, far from the capital, in the city of Valera, in the state of Trujillo, [opposition leader] Juan Guaidó addressed his followers at a rally: “We aren’t committed to any mechanism, with any action. We know that there are no magic solutions.” He thus tried to contain the criticisms received for his oscillating and contradictory moves — such as threatening force while simultaneously returning to talks in Barbados with Venezuela’s government.

As the two contending public meetings took place, Venezuela’s minister of communication, Jorge Rodríguez, held a press conference to inform the people about the detention of three members of the team close to Guaidó, which resulted from an investigation into the attempted coup d’etat on April 30.

The three men were discovered attempting an operation to sell some of the stolen weapons, five AK103 rifles and 10 clips, for $35,000. “[The opposition] present themselves to the world as so-called democrats, as human rights defenders, but in reality they are coup conspirators and criminals. They are always playing a dual game. On the one hand, they sit down with the revolutionary government, but, on the other hand, they persist with their violent agenda,” Rodríguez said.

Minister Rodríguez announced that the investigations and evidence will be brought to the talks with the opposition forces in Barbados, which the Norwegian government is facilitating. The minister is part of the [Venezuelan] government delegation along with [Miranda state Governor] Héctor Rodríguez. They are moving forward with the talks in their third public round, following the first two meetings that took place in Oslo, Norway, in May.

The content of the talks has been kept confidential. The Norwegian Ministry of Foreign Affairs stressed “the importance of taking the utmost precaution in comments and statements regarding the process.” The only thing publicly known is that six (undisclosed) points are on the table. All the rest is based on speculation, rumor, media events and political maneuvering.

One such media event was a joint press conference on Friday [July 12] attended by Luis Almagro, secretary-general of the Organization of American States; U.S. Special Representative for Venezuela Elliott Abrams; and three opponents from Venezuela.  They included Ivan Simonovic, a fugitive from justice for his involvement in the 2002 coup d’état [which seized President Hugo Chávez and was then forced to release him].

Almagro asserted that the only solution will come from U.S. pressure: “More than what is being negotiated around the table, if anything comes out it’s going to be due to factors external to the talks such as pressure, sanctions and other credible threats made by the U.S. administration.”

Venezuela’s ambassador to the U.N., Samuel Moncada, later accused the OAS of sabotaging the dialogue process, since its secretary general “asks for military intervention in Venezuela.”

In turn Abrams, who was responsible for arms smuggling and massacres in Central America in the 1980s, said: “I hope that nobody in (the press conference) room knows what’s happening, because the only possibility that the negotiations will be successful is that there will be confidentiality. (…) [S]o needless to say we hope the negotiations will succeed. Interim ‘President’ Guaidó and his team are not negotiating in Barbados because they trust the regime. They are negotiating to end the regime.” (Abrams quote, at 41 minutes into the video, tinyurl.com/yyq2ubd6)

None of the parties has shifted from its core position so far. The United States maintains that the departure of President Nicolás Maduro is the key point.

Speaking for the Chavismo side [the Venezuelan government], the president of the National Constituent Assembly, Diosdado Cabello, affirmed that there will be no presidential elections: “It is impossible. … [T]here were elections here on May 20 [2018] in accordance with the Constitution and Nicolás Maduro won. That cannot be disputed.”

Given clues, media events and rumors — what is known, and what is perhaps most important — is that the talks go on.