With each shocking photograph, the reality becomes ever clearer: The U.S. government is holding migrants in concentration camps.

The latest images came after Vice President Mike Pence himself toured two camps. Hundreds of men, so densely packed into a cell they cannot even lie down, cry out, “No shower!” Children are sleeping on concrete with only emergency mylar blankets for bedding.

Pence first tried to claim the detainees were well-treated, but after seeing another camp even he acknowledged, “This is tough stuff.” Reporter Josh Dawsey found the camps’ stench “horrendous.” Adults and children were denied blankets, mats, pillows, food and hygiene items. Mats were taken away from children suffering with head lice after one of them lost a comb. Young children were caring for infants. (Washington Post, July 12)

New York Congresswoman Alexandria Ocasio-Cortez initially came under fire for characterizing detention centers as concentration camps until progressive Jews, including Holocaust survivors and descendants, defended the term in protests outside Immigration and Customs Enforcement offices. “Never Again Is Now” has become a rallying cry. Japanese survivors of U.S. internment during World War II have also spoken out against the camps.

After the Supreme Court recently ruled against including a question about citizenship in the 2020 U.S. census, President Donald Trump promised to either bring a new argument to SCOTUS or overrule the high court via an executive order. On July 11, he retreated on the question, a concession to the strength of the im/migrant rights movement.

However, the xenophobe-in-chief is waging war on migrants by other means. Raids in 10 cities, aimed at apprehending some 2,000 undocumented immigrants, were originally planned for June, but delayed until July 14. Pending deportation, arrestees could find themselves in one of the same horrible concentration camps housing asylum-seekers.

Mayors of nine cities — Denver, Atlanta, New York, Chicago, San Francisco, Los Angeles, Miami, Baltimore and Houston — are refusing to cooperate with the raids. All of these mayors, with the exception of New York City’s Bill de Blasio, are African American or Latinx. (Planned raids in New Orleans were called off because of the approach of Hurricane Barry.)

With these preparations in place, where ICE cops did knock on doors, they were ignored or turned away when they failed to produce a warrant. Most of the nine cities reported no arrests; the latest ICE tactics were reportedly a scaled-down operation over the course of the week.

Nevertheless, the threats of arrest, detention and deportation created a climate of fear and intimidation among im/migrant communities. Immigrants stayed home from work, avoided shopping, skipped church services, and in general stayed inside on July 14. The atmosphere remains tense in the nine targeted cities as ICE cops could return over the next week with arrest warrants in hand.

With no advance warning, ICE agents knocked on doors in Immokalee, Fla. The Coalition of Immokalee Workers has won successful boycott campaigns against fast-food chains and is currently boycotting Wendy’s for its refusal to join the Fair Food Program. While no one was arrested, the attempted arrests were a menacing act against farmworkers.

Meanwhile, the horrors at the border continue. On July 14, Ohio Sen. Sherrod Brown was denied entry to children’s detention camps in Texas by Customs and Border Patrol agents, while Trump fired off blatantly racist tweets against Congresswomen of color Alexandria Ocasio-Cortez, Ilhan Omar, Ayanna Pressley and Rashida Tlaib, all of whom call for closing the camps.

The masses speak: ‘Close the camps!’

The July 12 call for actions to close the camps brought out masses of outraged people. Protests took place in 700 to 800 U.S. cities and around the world. The number of people participating ran from the hundreds to the thousands. Homemade signs bore familiar slogans — “No human being is illegal,” “Close the camps,” “Never again is now.” But many who brought signs were new to activism.

Here are just a few examples of the coordinated outrage that was replicated from coast to coast. Demonstrations continued through the weekend, building momentum for grassroots efforts to thwart the raids. 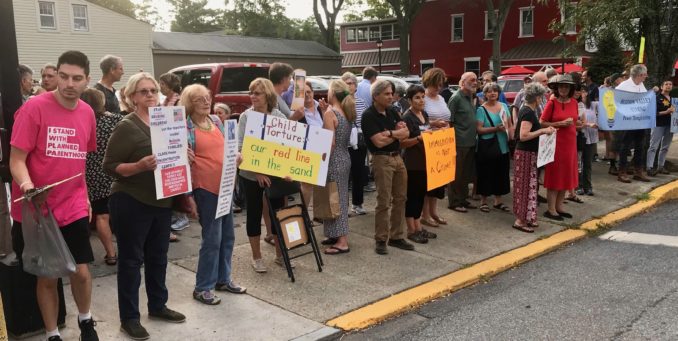 The biggest banner at a vigil at the main intersection of the small town of Rhinebeck, N.Y., read, “Hudson Valley Strong — Power through action.” People in the area turned out about 80 strong, many coming from a service in a local church. The handmade signs, more than a few written on the backs of signs supporting Planned Parenthood, included messages like “Our Line in the Sand: Child Torture” and “Immigration is not a crime.” While many of the cars passing by honked in solidarity, the best moment was when a large Fed-Ex truck passed with the driver leaning hard on a loud horn.

A large crowd, demanding closure of immigrant detention camps, blocked traffic for over an hour and a half at a busy intersection in downtown

Buffalo, N.Y., on July 11. Trapped at the front of the line of traffic was a UPS truck driver. While protesters refused police demands to let him through, this African-American union member honked support for the protest and gave demonstrators high-fives.

“We are here to demand action from our leaders,” said protest organizer Rachel Ablow. “As an American Jew, I am horrified to see history repeating itself and feel compelled to join many others, including Holocaust survivors, in demanding the closure of the camps.” (News release from Justice for Migrant Families) 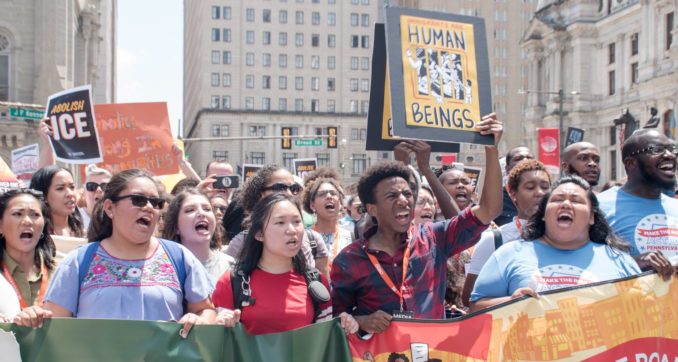 Nearly 1,000 demonstrators took to the streets of Philadelphia, shutting down major roadways in the heart of the city. Workers World Party’s contingent marched under the banner of “Abolish ICE, the Police, and the Pentagon,” drawing widespread support.

Chanting “Free the Families! Close the Camps!” and demanding the abolition of ICE and closure of the local Berks Detention Center, activists marched around City Hall and then to the local Department of Homeland Security headquarters, which is the most active and aggressive ICE office in the country. They also demonstrated outside the “Round House,” where the notorious Philly Police Department is headquartered, linking the struggle of migrants and refugees to that of prisoners and Black and Brown workers in the U.S. 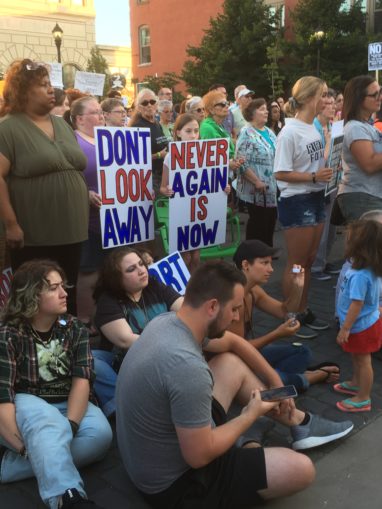 In Cleveland, 1,000 people filled Market Square Park for a nighttime candlelight vigil where a multinational, multigenerational crowd chanted, “Close the camps!” Homemade signs included, “Deport the racists” and “Queer as in abolish ICE.”

About 30 people participated in a rally at Seville Park in downtown Pensacola, Fla., on July 7. The protest was hosted by Strive, the local transgender advocacy group; Workers World Party; Party for Socialism and Liberation; and Dream Defenders. Speakers, one for each group, stressed the need for all protests against ICE and its attacks on im/migrants to take an internationalist, proletarian approach to liberation. They urged looking beyond reformist measures and insisted on the abolition of ICE. Participants discussed possible plans for future resistance, including a bus trip to the Texas/Mexico border and a fight to shut down Pensacola’s local Border Patrol office. 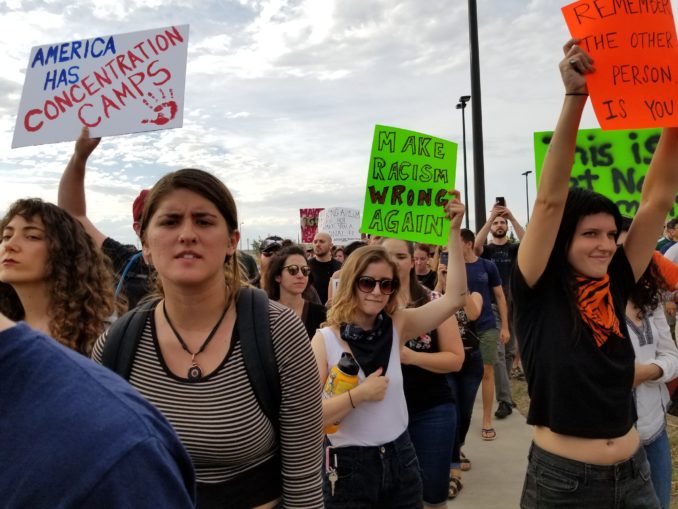 In Aurora, Colo., over 2,000 people protested jailing immigrants, separation of families, deportations and the threats that refugees are facing. They marched 2 miles to the Aurora Processing Center, a detention facility run by the private Geo Group, east of Denver, where Lights for Liberty was holding a vigil.

Cheers for the speakers could be heard inside the center where more than 1,500 immigrants have been detained without bail for months and cannot get out. Protesters banged on the doors and screamed, “Tear it down!”

A young woman told Workers World how her husband was deported and she now has two children to provide for. It will cost $15,000 to try to bring him back, money she does not have. 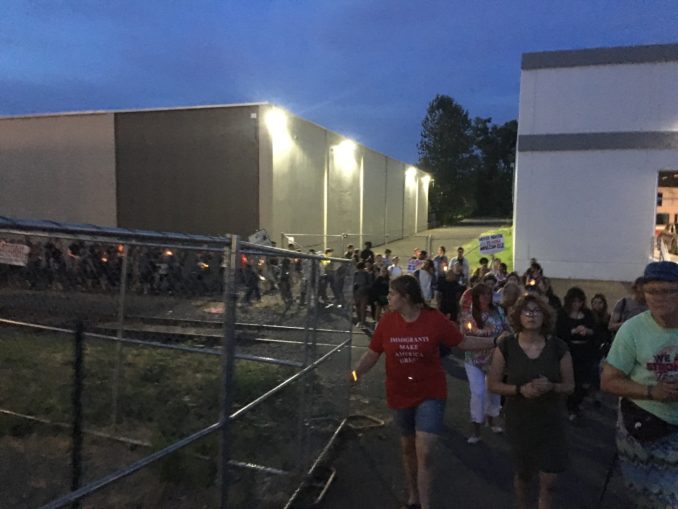 Protesters in Portland, Ore., held a “week of action,” rallying outside and marching into Microsoft and four Portland banks to demand they divest from ICE. Bank of America and Suntrust said they would divest, but that the process will take months to complete. Other banks targeted were PNC and Bank of the West.

Businesses were forced to shut and lock their doors for hours. Demonstrators told workers to call their managers and tell them to end their contracts with ICE or the protests would continue. ICE contracts with Microsoft use Azure Government software.

On July 12 over 1,000 people gathered in front of the ICE detention center, then marched through downtown Portland demanding: abolish ICE, stop corporate profiteering, reunite im/migrant families and end the inhumane conditions at the detention centers.

The July 12 “Lights for Liberty” actions were mainly initiated by Democratic Party-oriented organizations such as Indivisible, with the goal of activating voters ahead of next year’s election. “Vote him [Trump] out” was one of their chants.

Growing section of working class in solidarity with im/migrants

The massive turnout over the weekend shows a growing section of the working class is repulsed by the stench of racism and xenophobia emanating from the White House and is deeply concerned about the attacks on im/migrants. This in itself is progressive, despite the Democratic Party’s maneuvering to direct anti-racist sentiment into electoral channels.

Unions are taking a strong position against bigotry. The United SteelWorkers explained in a July 6 statement: “This is about human decency. This is about recognizing that many of the people coming to our borders seeking asylum are workers.”

Referring to the campaign to get major hotel chains not to contract with ICE, UNITE HERE International President D. Taylor said: “We’ve gotta do action at every one of those hotels. We’ve gotta turn up the heat … we’ve gotta get off our asses and get off Twitter and get in the streets where this evil is going on.” (Daily Kos, July 12) Marriott and Choice hotels have announced they would decline any request from ICE to house detainees.

Trump’s policies, designed to mobilize a racist base for his 2020 election campaign, have the unintended consequence of provoking widespread resistance.