Powerful women athletes are using their popularity and influence to speak out against various forms of social injustice. Two of them are Serena Williams and Megan Rapinoe.

Serena, generally known by her first name, is regarded as the greatest women’s tennis player ever. Since 1999, when she was a teenager, the African-American icon has won 23 grand slam titles, — including the Australian, French, Wimbledon and U.S. Opens multiple times. In the Open era, only Margaret Court of Australia has won one more grand slam title — for a total of 24. 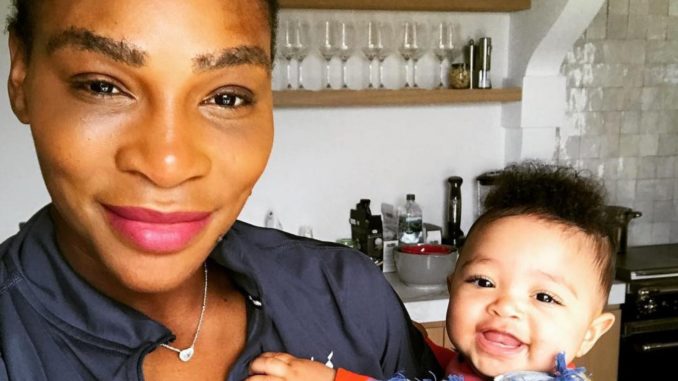 Now, just one month shy of her 38th birthday, Serena has played her way into three major finals since the birth of her daughter, Alexis Olympia, almost two years ago. She was in the first trimester of her pregnancy when she won the 2017 Australian Open. During her remarkable 20-plus-years span of playing tennis, Serena has been outspoken against the racist and sexist abuse she has endured on and off the court, along with her older sister, Venus, who has won seven grand slam titles.

During the BNP Paribas Open in Indian Wells, Calif., which Serena won in 2001, she, as well as Venus and their father Richard Williams, were called the racist N-word epithet repeatedly. In protest, Serena decided to boycott the event until 2015.

Serena has been viciously objectified for many years, both racially and sexually, for wearing tennis outfits that proudly show her muscularly built body. The descriptions are so repulsive and heinous they should never be repeated. They reflect how Black women have been and still are degraded as being hypersexual in a society dominated by white supremacy since the days of slavery.

During Serena’s pregnancy, Ilie Nastase, a former grand slam winner from Romania, referred to her unborn child with the statement: “Let’s see what color it has. Chocolate with milk?” (New York Times, April 25, 2017)  Serena’s spouse, and father of Olympia, is white.

Serena responded to Nastase’s racist statement on Instagram:  “It disappoints me to know we live in a society where people like Ilie Nastase can make such racist comments toward myself and unborn child, and sexist comments against my peers. I am not afraid unlike you. You see, I am no coward. Does my sassiness upset you? Why are you beset with gloom? You may shoot me with your words, … you may try to kill me with your hatefulness, but still like air I will rise.”

Serena was referring to the International Tennis Federation’s banning of Nastase from their events for his verbal, sexist abuse of British women tennis players.

During her match with Naomi Osaka during the U.S. Open finals in August 2018, Serena was accused of cheating by a male referee, who took away a point and then a whole game, when she protested the allegation.  Serena has publicly accused referees of displaying double-standard treatment toward women tennis players, who are portrayed as hyper aggressive, while male tennis players receive only a slap on the wrist under similar circumstances.

Following her loss to Simona Halep at the Wimbledon championship match on July 13, Serena was asked during her press conference whether she should concentrate on just playing tennis and not on activism. Serena replied: “The day I stop fighting for equality and for people that look like you and me will be the day I’m in my grave.” With those words, Serena continues to be a beacon of inspiration for all women athletes of all nationalities, ages and abilities, especially those who are working mothers.

Black former San Francisco 49er quarterback Colin Kaepernick, during the 2016-17 National Football League season, began to take a knee while the U.S. national anthem was played in order to protest racist police brutality. That inspired Megan Rapinoe, an openly lesbian member of the U.S. Women’s Soccer Team, to take a knee for the same cause, including for gender equality. 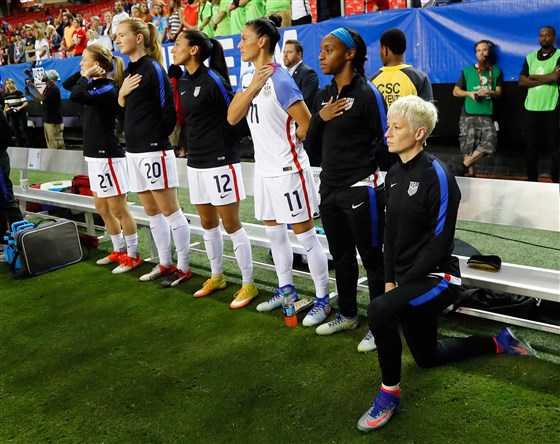 She and Kaepernick took a lot of criticism for their stance, including from white-supremacist and misogynist Donald Trump, but neither one of them wavered.  Kaepernick has been denied the right to play football since his heroic act. The attacks on Rapinoe include homophobia.

Rapinoe told Yahoo Sports: “Colin Kaepernick very much inspired me, and inspired an entire nation, and still does, to actually think about these things.  The way he spoke about them so clearly, so matter-of-fact, wasn’t trying to convince anyone. Just, ‘This is what is happening, this is what I’m willing to do about it.’ I found that extremely inspiring and convicting. Like, how can you not support?” (May 13)

During the 2019 World Cup games in France she refused to sing the national anthem before each match, and says she will continue to do so going forward, as a protest.  Rapinoe stated her reasons for not singing the anthem in an essay for The Players’ Tribune in 2016: “I haven’t experienced over-policing, racial profiling, police brutality or the sight of a family member’s body lying dead in the street.  But I cannot stand idly by while there are people in this country who have had to deal with that kind of heartache.

“There is no perfect way to protest. I know that nothing I do will take away the pain of those families. But I feel in my heart it is right to continue to kneel during the national anthem, and I will do whatever I can to be part of the solution.”

Rapinoe and the rest of the U.S. soccer team rank No. 1 worldwide. The team, which is multinational and multigendered, has put ongoing pressure on the U.S. Soccer Federation, demanding pay equity for women and gender-oppressed players. Their male counterparts make much more money and receive more benefits. All 28 women players filed a class action lawsuit against the federation this past March, charging gender bias and demanding equal pay.

The lawsuit states that between 2013 and 2016,  women soccer players could earn a maximum of $4,950 per “friendly,” or nontournament, victory, while male players earned an average of $13,166 for the same type of game. A new collective bargaining agreement with the USSF signed in 2017, which has not been made public, reportedly saw a spike in women’s salaries, but the pay for male and female athletes is still not equal.  (The Atlantic, March 19) The disparity between men and women athletes is relegated not just to soccer, but to all professional team sports, reflecting the entrenched patriarchal-dominated U.S. society.

Rapinoe has refused to visit the White House, as most championship teams, pro or amateur, are invited to do.  When asked what she would tell Trump if she had the opportunity, Rapinoe said she would ask Trump: “Do you believe that all people are created equal? Do you believe that equal pay should be mandated? Do you believe that everyone should have health care? Do you believe that we should treat everyone with respect?  I think there’s some feelings of disrespect about the anthem protests or things I’ve said in the past, but ultimately I think I am here open and honest. I think he is trying to divide so he can conquer, not unite so we can all conquer.” (Washington Post, July 14)

Rapinoe says she drew inspiration from Serena, quoting verbatim from one of her press conferences on fighting for equality “until she is in her grave.”