A massive explosion at the Philadelphia Energy Solutions oil refinery in the predawn hours of June 21 lit up the sky with a fireball so large it was captured by a weather satellite. Some eyewitnesses thought they were seeing a nuclear bomb. It marked the second fire at the plant in 11 days.

Residents in the city, and as far away as Deptford, N.J., reported waking up to explosions that shook their homes. Aerial footage of the massive refinery, the largest in the U.S. northeast, showed the complex nearly engulfed in flames. Five workers were injured. 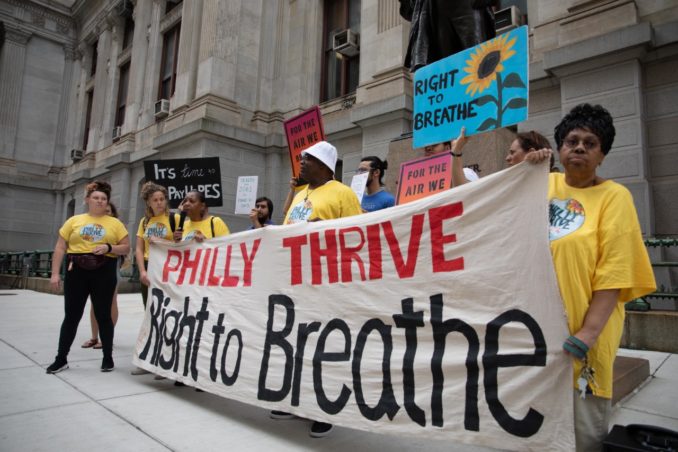 Residential areas in South and Southwest Philadelphia surround the 1,400-acre refinery. Officials are now revealing just how close the city and surrounding region came to experiencing a major catastrophic accident —  the explosion was that close to a hydrofluoric acid storage tank.

Exposure to HF can cause severe health problems and even death. At room temperature, the chemical can form a toxic cloud that can travel 7 miles in 10 minutes. HF burns may be initially painless since it destroys nerve tissue. In higher concentrations, HF also causes cardiac arrest. (Reuters.com, June 21)

Around 300,000 people live within 3 miles of the PES facility, and more than 1.1 million people live within a 7-mile radius. The multinational, working-class community surrounding the refinery is being encroached upon by gentrification, but concerns over the danger and toxicity of the facility leave many unable to sell their homes or move away. Several residents reported that the explosion rained large chunks of debris on their property.

PES, the largest stationary polluter in Philadelphia, has been in violation of the Clean Air Act in 9 of the last 12 quarters. The company declared bankruptcy in 2017, which raises worries that PES’s continued financial struggles have resulted in neglect of necessary maintenance and layoffs of workers. The refinery’s 150-year-old infrastructure leaves it prone to dangerous accidents.

Required to file a risk-management plan every 5 years, PES reported an incident in 2017 that involved the release of 8,000 pounds of propane after  equipment failure. The risk-management plan lists chemicals that the Environmental Protection Agency says would cause significant off-site problems in the event of a major release.

Over the last five years, PES has been fined $649,417 in penalties for violations of air and water protections. (Philly.com, June 22) According to a 2017 study by the NAACP, the National Medical Association and the Clean Air Task Force, the refinery is responsible for 72 percent of toxic air emissions in Philadelphia. (Philly.com, June 23)

While refinery officials claim the fire is no longer a threat and air management services claim the air is “fine,” residents and environmental activists groups disagree. The environmental group EDGE Philly says that black smoke and a continuing fire, at a site full of toxic and explosive substances, constitute an ongoing health threat to residents. (EDGE stands for Ending Dirty Gas Exploitation by Encouraging Development of a Green Economy.)

Hours after the explosion, Philly Thrive, a community organization of residents living near the refinery, responded with a press conference at City Hall. Thrive has protested PES’s deadly pollution since 2015. Their press release noted: “Philadelphians living near the refinery are dealing with a health epidemic of asthma, cancer, heart disease and other complications related to heavy air pollution.”

“Enough is enough — we have to act before half the people in South and Southwest Philly are dead,” said Sonya Sanders, Philly Thrive member and Grays Ferry resident. “Do you know how scared I was this morning to be shaken out of my sleep by the explosion? I do everything I can to close my windows and keep this pollution out of my house. But when these fires happen, it shows there really is nothing we can do to protect ourselves.”

Another Philly Thrive member Sylvia Bennett said, “The pollution from the refinery is a silent killer, and we’re breathing that in. It’s taken the lives of babies, elders and everyone in between! We have the right to breathe clean air, and we need to hold the refinery accountable for what they’re putting out into the community.”

To draw attention to the crises they face, Philly Thrive has staged weekly protests outside the refinery and recently blocked truck access at the refinery’s entrance. They demand that the City Council fund and mandate a study for decommissioning and repurposing the facility. They want the city to transition the refinery area until it’s restored public land with community-owned energy projects.

For the greatest accessibility, residents want a public meeting with all agencies involved, coordinated through Philly Thrive, to report on toxic releases and enforcement actions.

The facility was a problem for surrounding Philadelphia communities long before PES took over. In 2011 and again in 2014, unions representing plant workers confronted then-owner Sunoco over the risks posed to residents and workers from hydrofluoric acid used at the plant. The Sunoco complex was among 50 of 150 U.S. refineries that still use HF to make high-octane gasoline.

Calls by the United Steelworkers and other unions for the oil industry to invest in safer alternatives have been largely ignored. USW Local 10-1 now represents 600 unionized workers at PES, which is down from more than 1,000 when PES took over.

In 2010, the USW launched a campaign to end the industry’s use of HF. “In 2013, the USW found 26 million people in the United States were at risk of HF exposure from a refinery accident.” (Reuters.com, June 21)

Refinery accidents in Torrance, Calif., in 2015 and in Superior, Wis., in 2018, similar to the Philadelphia explosion, came dangerously close to releasing HF and prompted the evacuation of tens of thousands.

The nonprofit Clean Air Council called on the U.S. Chemical Safety and Hazard Investigation Board “to immediately begin an independent investigation of the conditions” that led to the June 21 fire. The council said the board has agreed to send four investigators.

Clean Air Council senior attorney Alex Bomstein called the refinery a concern “for many, many years.” Bomstein was skeptical of claims that residents faced no health concerns and noted that initial air testing could miss problems. “When you see a plume of black smoke, you’re seeing pollution,” said Bomstein, who lives in South Philadelphia and saw the plume rise over the neighborhood. (Philly.com, June 22)

This writer lives 5 miles from the refinery and knows of no evacuation plan in the event of HF release. This narrowly averted catastrophe is a wake-up call for action.