As years of the U.S. war on im/migrants stretch into decades, it becomes hard to imagine what additional horror could be inflicted by this white-supremacist capitalist government on people trying to find some small space of safety by crossing U.S. borders.

Yet this last week has brought news of another brutally cruel injustice. 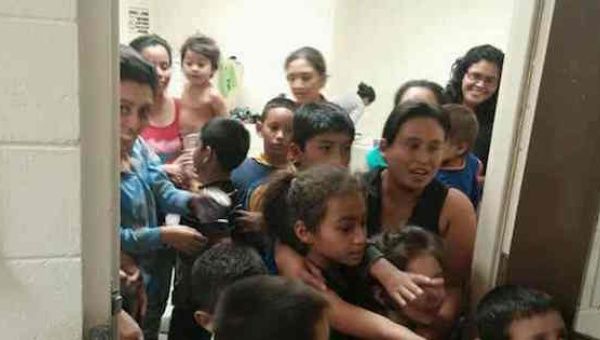 The U.S. Department of Health and Human Services, at the behest of the Trump administration, announced it would no longer provide money for education, recreation and legal aid for migrant children held in “government facilities” — that is, in the virtual concentration camps where migrants are locked up.

Right now over 13,000 migrant children are “housed” — incarcerated — in over 100 “shelters” — jails — across the U.S. These include children who crossed the border alone, as well as those forcibly separated from parents and relatives by the U.S. government.

These are children fleeing intolerable conditions in their home countries, mainly in Central America. There, poverty, violence and turmoil have been directly and indirectly fomented by the U.S. in its attempt to control and profit from transnational labor.

The hand of the U.S. ruling class in creating a crisis of im/migration was starkly evident in the recent general strike in Honduras. A mass people’s movement took to the streets to protest the country’s current, viciously violent right-wing government. These rulers had been covertly put in place by Washington in 2009 through a military coup against Manuel Zelaya, the elected, progressive president. People have been leaving Honduras ever since because of the horrific conditions resulting from that coup.

The recent HHS directive refusing to provide education, recreation and legal aid for locked-up children violates the 1997 Flores agreement, which set standards for the treatment of migrant children in government custody.

But that flouting of legality should come as no surprise.

Capitalist bosses, and the U.S. politicians ruling in their interest, care only about extracting profit from the peoples of the world. Services being denied the jailed children are doubtless considered “unnecessary frills” — especially if they cut into the profit margin of the companies contracted to provide these “shelters.”

Many of these companies are military-related firms like MVM, which provided guards to the CIA in Iraq, and General Dynamics. (“Defense Contractors Cashing In on Immigrant Kids’ Detention,” The Daily Beast, June 14, 2018)

Even as the prison-military-industrial complex makes money on the children, they are also being held as pawns, along with other migrants, in a high-stakes political game played by the Trump administration.

The administration has doubled the time that children are incarcerated, making it harder and harder for parents and family to liberate them. At the same time it blames Mexico for the “crisis at the border” — which has been created by the U.S.

The HHS directive against the jailed children is as clear as any declaration of war. It strips away any pretense of providing “caring” services for them. It is a declaration of class war by U.S. transnational capitalists against im/migrant peoples, showing absolute willingness to continue the genocidal assault of jailing and killing children.

When the U.S. policy of “family separation” — wrenching children away from parents and loved ones at the border — was unmasked last year, a mass outcry and protest stopped that cruelty, at least in its worst form.

Another wave of protest must now be mounted against this use and abuse of incarcerated migrant children for the profit of corporate jailers.

The outcry must link liberation of migrant children to the suffering of children inside the U.S., whose needs are being sacrificed on the altar of the giant U.S. war budget.

The protest must link the liberation of all children to the struggle against mass racist incarceration and exploitation of prison labor throughout the U.S. — where so many people’s lives are being sacrificed to profit making.

Organizing must fight for the liberation of all children as part of unrelenting opposition to U.S. imperialist depredations throughout the globe, as their countries and their lives are ground down for profit.