Stonewall Warriors, International Workers’ Solidarity Network and Workers World Party brought a strong contingent to the Boston LGBTQ2S Pride march of tens of thousands on June 8. The contingent represented the International Workers’ Solidarity Network, incorporating and elevating the LGBTQ2S struggle as central to the workers’ solidarity movement during Pride month and throughout the year. 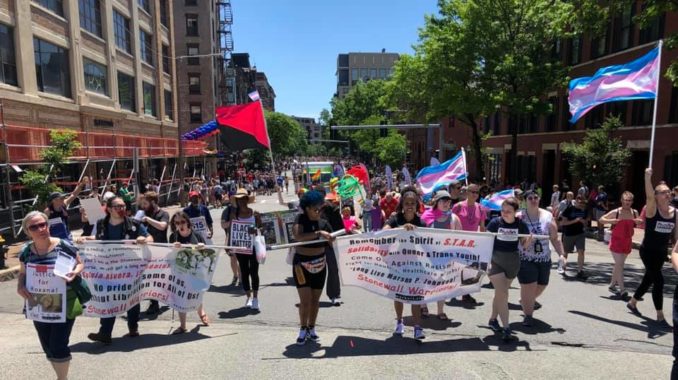 ‘No walls in the LGBTQS workers’ struggle.’

The contingent highlighted the intersection of struggles as central to solidarity, headlining, “There are No Walls in the LGBTQS Workers’ Struggle.” It also pointed out the anniversary of the death of Roxana Hernandez in immigration detention and the recent deaths of trans people of color under similar circumstances.

The contingent opposed U.S. imperialist war, chanting “U.S. out of Venezuela and Palestine!” It called for decriminalization of sex work, an end to ableism and white supremacy, and smash capitalism.

It saluted the young trans people of color who led the Stonewall Rebellion — such as Marsha P. Johnson and Sylvia Rivera. Hundreds of Workers World newspapers were handed out, as well as flyers promoting a forum on  Saturday, June 15, at 4 p.m. featuring Teresa Gutierrez on the connection between the International Workers’ Solidarity movement and the LGBTQ2S movement.