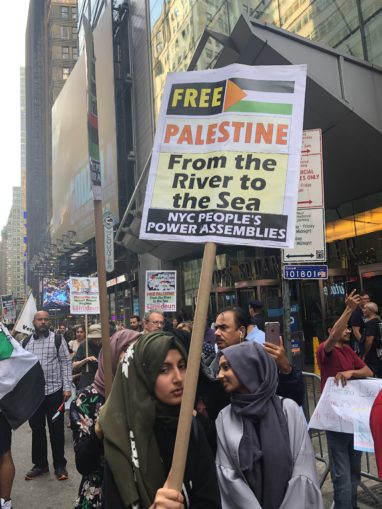 Hundreds rallied in New York City’s Times Square May 31 to mark International Day of Al-Quds, Arabic for Jerusalem. Launched in 1979 as one of the first official acts of the Islamic Republic of Iran, Quds Day is held internationally on the last Friday of the Muslim holy month of Ramadan to support Palestinians resisting Israeli occupation. This year millions joined demonstrations throughout Iran, across Iraq, Lebanon, Pakistan, Syria, Yemen and around the world.

Government forces attacked protests in Bahrain and Nigeria, while Israeli troops fired on thousands of Palestinians gathered for the Great March of Return at Israel’s barrier around the besieged Gaza Strip. “We have no doubt that the ultimate victory will be for the righteous and Palestine and that the land of Palestine will be a safe place for Muslims, Christians and Jews,” Iranian President Hassan Rouhani said at a Tehran rally.

This slightly edited message of solidarity with the Palestinian people was delivered by Sara Flounders, speaking for Workers World Party, at an Al Quds Day rally in New York City’s Times Square on May 31.

Resistance is justified when people are occupied! Greetings from Workers World Party on Al Quds Day!

Al Quds Day, Jerusalem Day, always the last Friday of Ramadan, is an international day acknowledged and celebrated around the world. Millions march on this day in solidarity with Palestine and the Palestinian resistance.

And Al Quds Day is a day born in revolution, 40 years ago in the great Iranian Revolution of 1979, as a salute to Palestinian resistance.

Palestine reminds us again and again of the capacity of a whole people to organize, to mobilize, to resist — for decades and generations — until liberation can be won.

Palestine is a resistance that inspires every country facing U.S. sanctions, imperialist wars, invasions, coups and occupations. In Yemen, in Iraq, in Syria, in Venezuela, in Cuba and in north Korea, peoples’ movements that are facing seemingly impossible odds and overwhelming U.S. military power also know it is possible to resist because Gaza has survived and continues to fight.

But Zionism, despite every high-tech weapon, drone and tank, can’t defeat Gaza — surrounded, isolated impoverished Gaza! The Zionists have failed again and again to defeat or to silence the Palestinian struggle.

Organized peoples’ resistance is the most powerful weapon. Consciousness and mobilization of a whole people are more powerful than any weapon the U.S. can provide or Israel can deploy.

There are no walls in the workers’ struggle. It is truly one global struggle. Our struggle in the U.S. — against racist cops, against anti-migrant ICE [Immigration and Customs Enforcement], against cutbacks affecting oppressed people — is stronger when we declare that Palestine is also our struggle.

Today, on Al Quds Day here and around the world, we are with Palestine, we join with resistance. From the river to the sea, Palestine will be free!

From the river to the sea, Palestine will win!

Nathaniel Chase delivered this message of solidarity on behalf of the International Action Center at the Al Quds rally in New York City’s Times Square on May 31.

We don’t want no two states, we want all of it!

We want all of it!

That’s right, we want all of it, because every inch from the river to the sea is Palestine.

Today, as we gather with millions of people around the world on Al-Quds, let us celebrate the extraordinary resistance of the Palestinian people, who for 71 years — since the settler-colonial Zionist movement displaced 750,000 Palestinians to create the racist state of Israel — have fought back against genocide and the theft of their homeland.

For 71 years the Palestinian people have faced down the most powerful war machine ever assembled, that of U.S. imperialism and its puppet state Israel, and yet they remain unbowed.

Because they know that the global Palestinian solidarity movement, including the Boycott, Divestment and Sanctions Movement (BDS), continues to gain strength.

And because they know that the unbreakable will of the Palestinian people is an inspiration to billions across the planet to press forward in their own struggles for national liberation, to strike powerful blows against the dying beast of U.S. imperialism.

So as we mourn the many martyrs of the Palestinian cause, let us also celebrate their resistance and chant for the whole world to hear: “From the river to the sea, Palestine will be free!”

Palestine and the U.S.: Two sides of the same struggle

This slightly edited greeting was given by Siddika Degia, an organizer with the People’s Power Assembly, at the Al-Quds rally in New York on May 31. 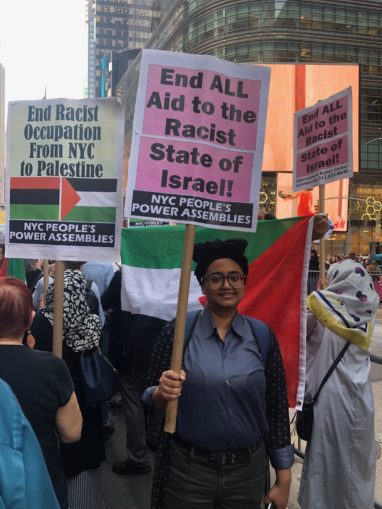 From Brooklyn to Palestine, killing people is a crime.

The constant killing of Black and Brown bodies by cops in the U.S. and the occupation of Palestine are not two separate issues. They are in fact one issue perpetrated by the U.S. war machine. From the constant selling of military weapons to Israel by the U.S. to the “renowned counterterrorism” exchange program provided by Israel to U.S. cops, the issue here is one of imperialism and the control of Black and Brown bodies.

The renowned counterterrorism exchange program is one where pro-Israel organizations like the American Israel Public Affairs committee send cops to Israel where the cops learn the benefits of tear gas to break up protesters and learn about the surveillance of neighborhoods. All tactics are used here in the U.S., like the famous New York Police Department’s Muslim Surveillance Program. In return, the Israeli military learns about drug war tactics cops use here in Black and Brown communities.

What both the U.S. and Israel forget is that people in both Palestine and the U.S. will keep rising up and will continue standing in solidarity with each other because, as we all know, the people united will never be defeated.