Most people in the U.S. are unaware of the fact that more than a century ago armies of occupation from the U.S., Britain, France, Germany and Japan were stationed in Chinese cities. The U.S. Navy had fleets of armored ships patrolling Chinese rivers and coastal waters. These concessions were forced on China by brutal gunboat diplomacy and enshrined by onerous unequal treaties that made China pay these imperialist countries huge indemnities.

Now, once again, the U.S. is making demands on China. President Xi Jinping has compared them to those unequal treaties imposed by the imperialist powers over 150 years ago. The latest U.S. trade demands on China have awakened a fervent nationalist response in every current of Chinese society.

In China, the words “unequal treaties” resonate deeply, while most working people in the U.S. have never even heard the term. We are told that U.S. “gunboat diplomacy” was a tactic of more than 150 years ago.

But just this May 19, U.S. warships escalated their so-called “Freedom of Navigation” exercises by sailing through the busy waterways of the South China Sea. On May 23, the U.S. Navy sent two guided missile destroyers through the narrow Straits of Taiwan. These are now regular monthly offensives. They are comparable to Chinese destroyers sailing into the Gulf of Mexico, off the coast of New Orleans and Houston.

The May 22 China Daily warned in an editorial: “With tensions between the two countries already rife, there is no guarantee that the presence of U.S. warships on China’s doorstep will not spark direct confrontation between the two militaries.”

Break with past wars and chaos

The standing of the Chinese Communist Party is based in no small part on its ability over the past 70 years to break with the humiliations, chaos and constant wars caused by past gunboat diplomacy, the decades of occupation by numerous foreign troops, and the harsh and unequal treaties they imposed.

These treaties were in fact terms of surrender dictated by the major imperialist powers of Britain, the U.S., France, Germany and Japan. China was forced to change its laws, pay huge indemnities and grant as “concessions” control of its cities, major ports and largest waterways.

The resulting uprisings, rebellions and civil wars were crushed, and much of the country was impoverished and destroyed.

The new communist government’s intention to ensure stable development and broad prosperity while resisting foreign intervention was a promise Mao Zedong made in October 1949 while proclaiming the founding of the People’s Republic of China.

Mao declared: ”[T]he Chinese people, comprising one quarter of humanity, have now stood up! The Chinese have always been a great, courageous and industrious nation; it is only in modern times that they have fallen behind. And that was due entirely to oppression and exploitation by foreign imperialism and domestic reactionary governments. For over a century our forefathers never stopped waging unyielding struggles against domestic and foreign oppressors.”

Mao warned that “every day and every minute the imperialists will try to stage a come-back. This is inevitable and beyond all doubt.”

“It is because we have defeated the reactionary Kuomintang government backed by U.S. imperialism that this great unity of the whole people has been achieved. …

“We shall emerge in the world as a nation with an advanced culture. Our national defense will be consolidated and no imperialists will ever again be allowed to invade our land.” 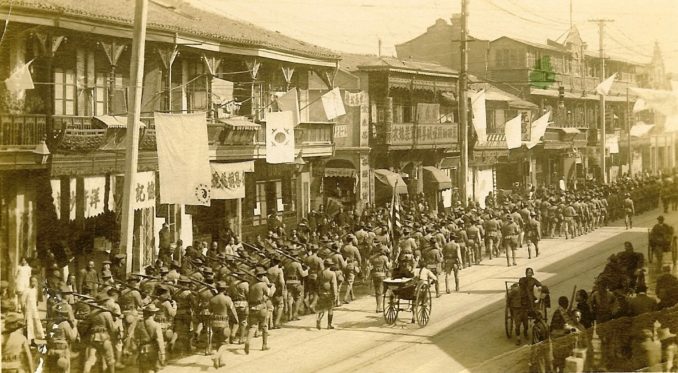 Marines of the Asiatic Fleet marching through Shanghai in 1911

The state news agency Xinhua in a May 25 editorial defined the current Chinese view. “Obviously, the U.S. arrogant demands are beyond the scope of trade negotiations and touch on China’s fundamental economic system. This shows that behind the United States’ trade war against China, the U.S. is trying to invade China’s economic sovereignty and force China to damage its core interests.”

The editorial asserts that U.S. attempts to restrict the development of its state-owned enterprises are seen as “forcing China to change its development path” toward socialism.

The demands include structural changes to its economic practices. China has reiterated that it will not make concessions on “matters of principle” and that the enforcement mechanisms would force China to change its own laws.

Several news sources note that China’s capitalist reformers, who seemed willing to accept these onerous conditions, have lost the upper hand in recent weeks. This makes it even less likely that China will make concessions compatible with what the U.S. wants. (channelnewsasia.com, May 26)

Over the past year U.S. demands have steadily increased through 11 negotiating sessions. During the negotiations, the Pentagon was intensifying its military threats with its “Freedom of Navigation” exercises.

The ban on software and electronic components of Huawei Technologies has extended the trade war in an effort to block China’s companies from all global markets. The implications of the Huawei ban are even more far reaching.

Pending legislation in Washington would put a ban on any Chinese company that violates U.S.-imposed sanctions on such countries as Iran, the Democratic People’s Republic of Korea, Cuba and Venezuela.

The Pentagon and U.S. trade negotiators know the criminal history of 130 years of U.S. military occupation of major Chinese cities very well. However, that is seldom mentioned by the corporate media or in U.S. history books.

U.S. Marines were garrisoned in Beijing (then called Peking), Guangzhou (then called Canton) and Shanghai from 1818 to 1949. They were displaced from 1942 to 1945 by Japanese occupation during World War II. The Chinese Red Army finally expelled them in 1949.

U.S. Marines were on armored warships all along Chinese coastal waters, while special fleets of river gunboats of the U.S. Navy and Marines patrolled Chinese rivers up to 1,000 miles inland. They were there to enforce U.S. trade interests and suppress uprisings. ChinaMarines.org is a website that gives a pictorial history glorifying the occupation.

This was an age of imperialist expansion and conquest. The U.S. wars against the Indigenous nations of the Americas, the British colonization of India and South Asia, the French in Vietnam and Southeast Asia, the looting and carving up of Africa were all underway. 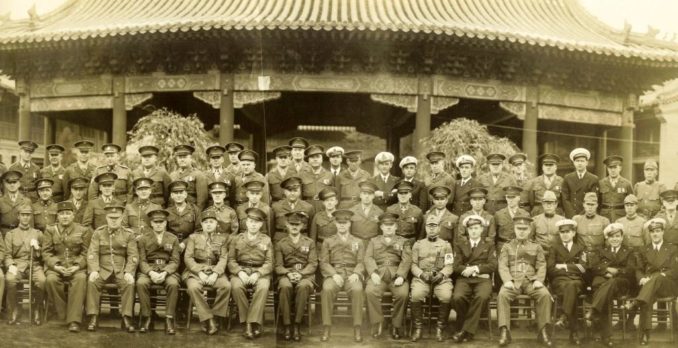 Photo of officers of foreign military powers in China, 1939

Britain fought two Opium Wars in China to enforce its “right” to sell opium. The merchants called this “defending free trade” and “protecting freedom of navigation.”

For 200 years before the 1840 Opium War, foreign merchants in China, by imperial edict, could trade only in a restricted zone on the Pearl River and on the South China Sea in Guangzhou (Canton) with payments made in silver.

Starting in the mid-1700s British merchants began smuggling tons of opium from India and trading it for silver in China. U.S. merchants, the second-largest group of merchants there, smuggled opium from Turkey to undercut British prices. Consumption of opium skyrocketed, as did the profits.

By 1839 millions of Chinese had become addicted. The Imperial Commissioner Lin Zexu was sent to enforce Chinese laws that banned opium throughout the Chinese Empire. He arrested 1,700 dealers and seized and burned 2.66 million pounds of opium already in Chinese harbors.

The outraged British merchants set up a blockade on the Pearl River and sent a full-scale naval expedition of 44 armored steamships with heavy cannon, rockets and infantry with long-range fire. The antiquated Chinese warships were destroyed. British ships then sailed up the Zhujiang and Yangtze rivers, occupied Shanghai and seized tax-collection barges.

In the 1842 Treaty of Nanjing, the port of Hong Kong became a British territory and five Treaty Ports were established, where the British could trade anything they wanted. China was forced to pay for the war and reparations to the merchants for the destroyed opium.

The U.S. government imposed its own Treaty of Wanghia on a weakened China in 1844. That gave the U.S. beneficial trade treatment and the right to station foreign warships and troops on Chinese territory, with autonomy to operate outside Chinese law.

By 1856 the British fought the Second Opium War for unrestricted trade in any port and an end to all bans on opium. The U.S. and French joined in with their own naval bombardments, amphibious assaults and destruction of forts and city walls. A new treaty legalized Christianity, opium and the mass transport of Chinese indentured laborers to the U.S. and throughout the British Empire.

When the Boxer Rebellion, a mass peasant anti-Western movement, broke out in 1899, a multinational imperialist force of British, U.S., Russian, German, Austrian, Italian, French and Japanese troops put it down. Then they spent an entire year looting Beijing, Tianjin and other major cities.

The first Opium War in 1840 is considered the beginning of the Century of Humiliation. When Trump’s trade negotiators first presented their list of demands to their Chinese counterparts, the Chinese news outlet Global Times ran the headline: “Is It Now 1840?”

This May 20, President Xi, in a highly publicized move, visited a rare-earth magnet factory in eastern China. This visit was interpreted as part of China’s leverage over its supply of rare-earth materials, which are used in a wide range of high-tech U.S. products, such as smartphones and electric cars.

The next day Xi called on China to embark on a new “Long March” and remain resilient — a clear signal that the country is gearing up for a prolonged struggle with the U.S.

President Xi’s talk was given in Jiangxi, known as the starting point of the 6,000-mile Long March by the Chinese Red Army in 1934-36. This organized retreat, under heavy bombardment, led to the ultimate victory of the Red Army and the defeat of U.S.-backed Nationalist forces by 1949, with the emergence of Mao Zedong as China’s leader.

On May 13, a Morgan Stanley economist, Michael Wilson, warned that the U.S. economy could fall into recession if the country’s trade war keeps escalating. Even before the desperation of Trump’s trade war, this was a steady prediction. It now seems inevitable.

The 18 years of U.S. wars in Afghanistan, Iraq, Libya and Syria are by every measure an absolute disaster for U.S. dreams of conquest and recolonization.  China, with a population many times larger than all these countries combined, with advanced technology, internal cohesion and many trading partners, is in a strong position to resist U.S. demands.

It is not the world of 1840. U.S. imperialism is on the decline. It can’t recapture its past position with threats and dreams of colonial conquest.