The following report is based on a chapter in Catalinotto’s book, “Turn the Guns Around: Mutinies, Soldier Revolts and Revolutions” (World View Forum, 2017), which tells the story of the American Servicemen’s Union, an anti-war, anti-racist organization of U.S. active-duty service members during 1968-75.

On the evening of June 5, 1969, hundreds of GIs imprisoned in the Army stockade at Fort Dix, N.J., rose up in rebellion. Half the stockade burned as these troops, many of them active opponents of the U.S. war in Vietnam, defended themselves against an attack by 250 military police.

Some of the most effective anti-war soldier organizers were being held in the Fort Dix Stockade during the first half of 1969: Henry Mills, Terry Klug, John Lewis, Bill Brakefield, Tom Tuck, Tom Catlow, Jeffrey Russell and Robert North. Lewis, Mills and North had organized meal strikes and other mass actions in the stockade in early 1969.

The stockade commanders considered the whole prisoner body to be a pack of trouble, and accordingly, they inflicted whole groups with collective punishment. For weeks building up to June 5, the anger of the GIs had been growing. Their issues: inadequate food, long confinements without trial, racism in the stockade system against Black and Puerto Rican GIs and interference with their mail.  (The AWOL Press, vol. 1, No. 6)

On June 5, with temperatures in the sun over 90°F, the guards ordered the GIs housed in prison blocks 66 and 67 to stand in formation for hours that afternoon.

To this kind of provocation, the men’s reaction was destined to go beyond refusing to eat a meal. That evening, hundreds of prisoners smashed windows, threw beds and footlockers out of the barracks, and some set buildings afire. The stockade authorities sent in 250 troops armed with riot guns and tear gas. They beat Brakefield, a member of the American Servicemen’s Union (ASU) and an anti-war activist, until he was unconscious.

As soon as the union learned of the rebellion and of the brutal repression of our members and other GIs, ASU Chairperson Andy Stapp got to work building support for the prisoners and for any of the GIs facing new charges. The first step was to put the Army on the defensive for systematic, brutal treatment of the prisoners, most of whom were facing charges for the very low-level offense of Absent Without Official Leave (AWOL). The next step was to demand the right to investigate conditions in the stockade. 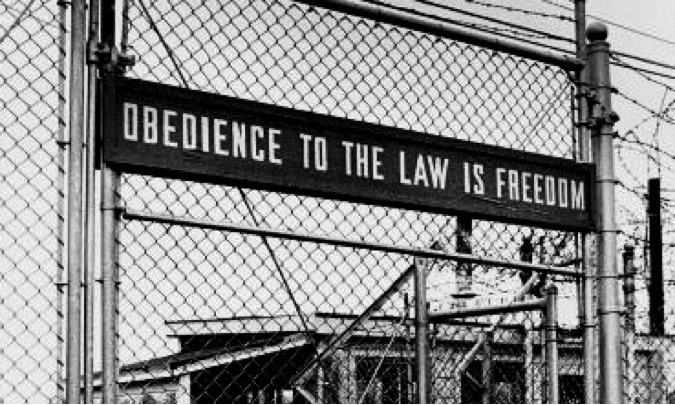 ASU gets Army to answer

The following article appeared in the ASU monthly newspaper, The Bond, that July:

“On June 20, the Army answered the ASU. In a letter written for the Secretary of the Army by Col. James C. Shoultz, Jr. (“Acting the Provost Marshal General”), the Brass denied that GIs in the Dix stockade had been abused, denied overcrowding, denied that MPs used “physical contact” with the prisoners (but admitted that nine prisoners had been hurt), denied that tear gas was used and refused to allow the ASU to investigate the stockade or see medical records.

“In addition to imprisoning and then further mistreating these citizen soldiers, the Army now proposes to try them for their resistance. Of the 150 involved in the rebellion, 38 have now been charged as a result of this resistance. Ten have been singled out for special charges of riot, inciting to riot, conspiracy to riot, arson, etc. Four of these are ASU organizers. One is Terry Klug who returned from Europe several months ago, where he worked with RITA — GI resisters.

“Another is Tom Tuck, a Black GI who earlier led the ‘Dirty Dozen’ at Fort Knox, Ky. Bill Brakefield received sanctuary at City College in New York last fall when he refused orders for Vietnam. Jeff Russell joined the Union while confined in the stockade.

“The ASU is not only busy publicizing the vicious injustice of this Brass attack, it is rallying support among civilians as well as GIs to fight back.” (The Bond, July 22, 1969)

If Mills and Lewis escaped being arrested and charged, it was only because they weren’t housed in Cell Blocks 66 and 67. The two had been organizing effective mass actions — like meal strikes — against the stockade authorities, but none of the strikes had turned into a spontaneous general rebellion as on June 5.

The charges against the thirty-eight, and especially against the five GIs singled out for general courts-martial and possible heavy sentences — including the ASU organizers and their closest allies — were extremely serious. Klug faced more than 56 years in prison.

For the 21-year-olds at Fort Dix, it was mind-boggling to think they were facing decades in prison merely for rebelling against injustice.

For the ASU national organizers in their NYC office, there was only one guilty party: the U.S. Army. Sure, someone set the stockade on fire, but it was a building that shouldn’t have been there in the first place. And it was holding the wrong prisoners.

The Pentagon officers were dropping napalm bombs on villages all over Vietnam and setting people on fire every day. The GIs knew that, and you could tell from their letters that many of them hated it. The ASU members especially hated it, and it was understandable that some took direct action to express their feelings.

The ASU started to organize defense for the Fort Dix 38 just as it had for the Black GIs at Fort Hood, Texas, who were protesting riot-control duty in Chicago the prior summer. Union organizers decided to first build solidarity among other GIs and with the civilian anti-war movement, then get publicity out to all the anti-war media to build support and break the story into the corporate media.

The ASU had an advantage in the summer of 1969: A majority of the population had turned against the war, with an even larger majority in the Northeast. Also, Fort Dix was only 36 miles from Philadelphia and 72 miles from New York City. Unlike Fort Hood, Fort Dix was not in rural Texas where the anti-war and anti-racist GIs could be isolated from their supporters.

The government still had its repressive state power right there at Fort Dix, but there were thousands of young revolutionaries and hundreds of thousands of sympathizers who would, when they heard the truth about the stockade, support the Fort Dix 38.

During that summer of 1969, when the Richard Nixon administration was making the first tentative moves to pull U.S. troops out of Vietnam, the ASU published a special message from the GIs among the Fort Dix 38 who were closest to the union and faced general courts-martial and the most consequential charges. Here are excerpts from some of their statements published in a special flyer by the ASU:

“Jeffrey Russell: ‘On June 5, the prisoners were made to stand at attention for four hours in the boiling sun. The same day two prisoners were beaten by guards. Twice that day the people’s personal items had been torn through and scattered. After lunch cell blocks 66 and 67 were uprooted and the people were forced to change cell blocks. The people stood in the sun for three hours before they were moved. … Other guards said that this was part of a plan to force the people to riot. … The riot that came on June 5 was a glorious retaliation, by the people, against the Nazi repression and the mercenary Army… . The people chanted, “Vietnam, we won’t go.”’

“Carlos Rodriguez Torres: ‘The next thing I tell you is absolutely true and I can use the person’s name because it was me. … Sgt. Himan put his hands on me and I tried to protect myself. SP4 Miller started punching. Next thing I know all six are trying to put me down and tie my hands behind my back and begin to put on pressure. More punches on my back, sides, head and, next thing I know, Sgt. Himan, to prove he is the man he isn’t, puts my head on the floor, left side up, and leaves an imprint of his boot and bump on the other side. They kicked me in the back of my head, and put a foot on the back of my neck and applied pressure.’

“William Brakefield: ‘What we want as a union has been said before. We want the rights afforded human beings, and not what being slaves of capitalist exploiters forces us to accept; we don’t want “yes-sir-ing” or any more “sir-ing” of officers, which is equal to “yes mista bossman” and “nosa mista Charlie”… . We want freedom for those of us who wish not to serve the nation in times of unjust wars or in any war the United States wages if we choose not to serve. … We want the plague against the Black man removed from the army forever, especially against the Black Panthers and the Black Muslims.’

“Terry Klug: ‘We as 38 GIs who have already served much time in Pig concentration camps for crimes against nature and mankind — such as going home to be with our wives, girlfriends and families, for refusing to go to Vietnam and participating as human beings in an imperialistic and inhuman war against brave men and women fighting for their own freedom, for speaking out against the fascism that presides in our military and, indeed, throughout our entire governmental system, and for the crime of being Black or Puerto Rican. … May our many comrades who are presently and fortunately on the outside take up the fight with us so that we together, as one strength, as one righteous force, may bring an end to the evil that is warping our country and bringing destruction and suffering on our brothers of the world.’”

Klug’s supporters outside got his message. The ASU, the Fort Dix anti-war coffeehouse, Students for a Democratic Society, YAWF and the Rainbow Coalition — which included the Black Panther Party, the Young Lords Organization, the Young Patriots, the Resistance and the Committee to Free the Ft. Dix 38 — all began to start organizing for a mass demonstration set for Oct. 12, 1969.

Look for a report later in the year about the Oct. 12 women-led demonstration and the resolution of the charges against the rebellious soldiers.