Around 200 people marched and then gathered at the Venezuelan embassy in Washington, D.C., on Saturday, May 18, to show solidarity with Venezuela and the last of the embassy protectors, who had been forcibly removed from the embassy by police two days earlier. For 36 days, anti-war activists and journalists in the U.S. had been staying inside the embassy to prevent the U.S. from installing agents of right-wing pretender to Venezuela’s presidency Juan Guaidó. 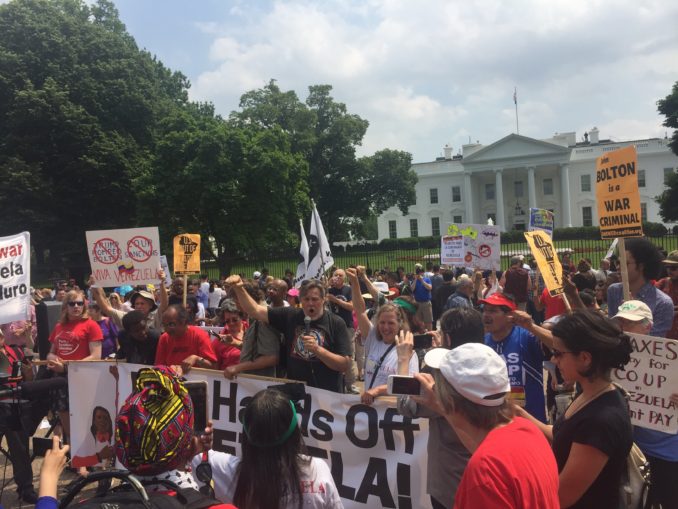 Support for Venezuela unites the anti-imperialist left. Washington, D.C., May 18.

Under the Vienna Convention, an embassy is the property of an elected government. Regardless of whether the U.S. likes that government or not, it has no right to seize its embassy. While Trump’s National Security Adviser John Bolton tweeted on May 19 that Guaidó is the “democratically elected government of Venezuela,” this is blatantly false. Last year, a presidential election was held and the people elected Nicolás Maduro. Guaidó, who arbitrarily declared himself the president Jan. 23 without an election, has no legal right to the embassy.

The struggle to defend the embassy, then, has been a way to expose the U.S.’s blatant disregard for international law and the sovereignty of other nations.

Over the previous week, repression and resistance at the embassy had both escalated. On the night of May 13, the D.C. police broke into the embassy, but having no legal basis for removing the protectors, they tried to scare them out with a show of force. The activists, however, did not back down. Their lawyer, who was on the premises, asserted the legal right of the protectors to be there. No arrests were made that night.

Two days later, the Rev. Jesse Jackson visited the embassy and successfully delivered food aid to the protectors, despite attacks by opposition forces who had created a blockade around the building. Over the last few weeks, the opposition forces have physically — and illegally — prevented embassy supporters from delivering this aid. In one violent episode, they actually beat the president of Veterans for Peace, Jerry Condon. A photo of a bloodied Condon spread quickly on the internet.

That Jackson succeeded in delivering the food was no small victory and a sign that the balance of forces was shifting in favor of the embassy protectors. Jackson threatened to mobilize ministers and people from around the country to come to the embassy every day “until there’s a break in the situation.” (Washington Post, May 17) 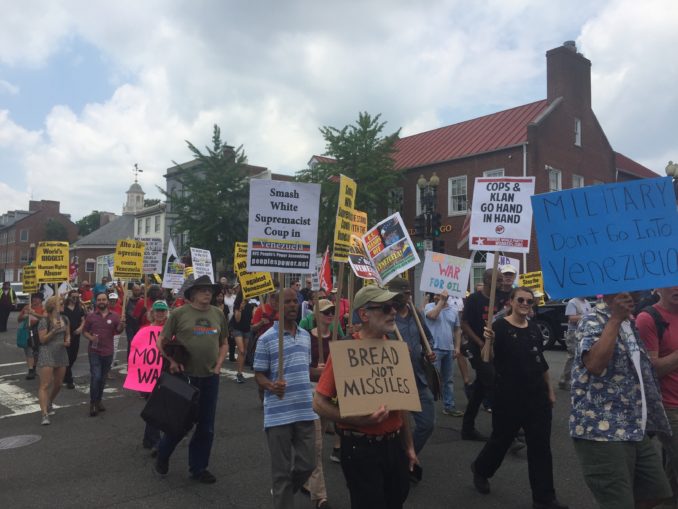 But before any more attention could be brought to the struggle, the cops moved in to make arrests, this time with the pretense of a legal basis that resulted in a bogus charge. In an attempt to maneuver around international law, the U.S. charged the four remaining activists with “interfering with a federal law enforcement agent engaged in protective functions.” They avoided charging them with trespassing, which would have broken international law and set a dangerous precedent for diplomats around the world.

The charge carries a maximum of 1-year jail time and upward of $1,000 in fines and also includes a restraining order. The four activists — Kevin Zeese, Adrienne Pine, Margaret Flowers and David Paul — were released on the order of a federal judge shortly after the arrests. On May 18 they were able to attend the march but could not join the rally outside the embassy. Speaking at the end of the march, they affirmed their continued support for Venezuela and determination to continue the struggle, despite the arrests. Their words and actions were an inspiration for the movement.