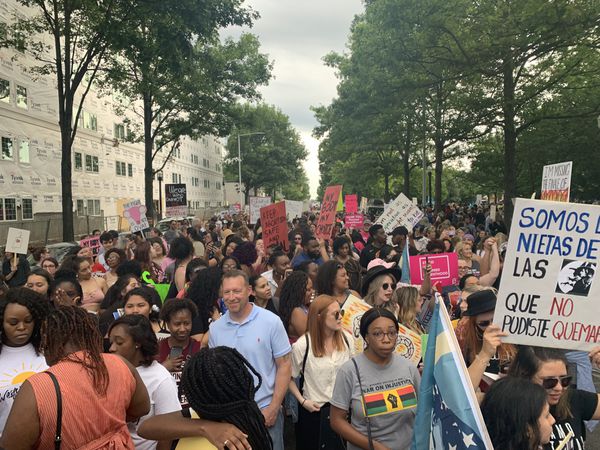 #StopTheBans actions are called for May 21, noon local time, at statehouses, town squares and courthouses across the U.S. Other protests will follow through the week. To find a list of actions, go to stopthebans.org.

On May 15, Alabama Gov. Kay Ivey signed into law the most restrictive abortion law in the U.S. The reaction from working-class and oppressed people of Alabama has been extraordinary. In less than a week, thousands have organized, marched and rallied — from Huntsville to Mobile, from Birmingham to Montgomery — to protest the law.

The law makes providing an abortion a felony punishable by up to 99 years in prison unless its to save a woman’s life — with no consideration for pregnancy by incest or rape. This directly affects not only cis gender women, but transgender men, nonbinary people with a uterus and intersex people, all of whom are capable of getting pregnant and all of whom deserve reproductive justice.

This fascistic state law is currently unenforceable under existing federal law, but the reactionary leaders of Alabama know this. It is part of their plan.

Their plan is for Alabama and several other states to propose and pass illegal, restrictive laws to challenge and overturn Roe v. Wade, the landmark 1973 Supreme Court decision that guarantees women a fundamental “right to privacy” that protects the freedom to get an abortion.

Georgia, Mississippi, Kentucky, Ohio and, as of a few days ago, Missouri, are among the states trailing Alabama in their attempts to have Roe v. Wade overturned with “heartbeat bills” that rely on myths, lies and reactionary patriarchal thought and practice as justification for repression. 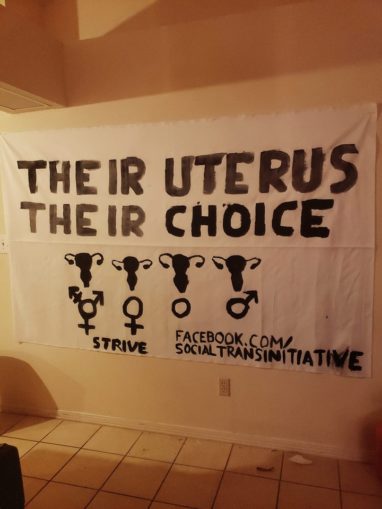 The weekend of May 18-19, this writer, who traveled from Florida, joined hundreds of working people — trans, cis, queer, Black, white, Brown, dis/abled and other oppressed groups — at Bienville Square in downtown Mobile, Ala., to chant, march and “shut it down” in protest of the violent law.

Speakers on May 18 included people of all genders, races, nationalities and dis/abilties, from youth to a former abortion provider. All these expressed anger, disgust and fear of this bill and of the rising tide of right-wing extremism that bears down closer and closer on the working class with each passing day. Most notably present was Chikesia Clemons, a Black woman brutalized in a south Alabama Waffle House by armed police last year.

A handful of reactionary, anti-abortion counterprotesters showed up but were quickly outmaneuvered by the organizers. The religion-spouting anti-abortionists were eventually kicked out of the park by cops surveilling the rally — for having alcohol.

After a few people spoke, including the newly formed Alabama Coalition for Reproductive Rights representative who read a manifesto against the reactionary legislature, a march started. Led by the ACRR and the Mobile Bay Green Party, about 100 people marched several blocks through the city and shut down at least one intersection for a number of minutes. Those participating included Clemons, STRIVE (Social Trans Initiative), Workers World Party and Party for Socialism and Liberation.

Along the way, people driving by honked and raised fists in support of the march. After the march, more speakers urged recommitment to the fight for free, safe, on-demand abortion and other reproductive rights.

On the second day of Mobile protests, hundreds of people again flooded Bienville Square to chant and shout against this heinous law. On both days, protesters wore black to signify the current lack of health care and reproductive justice for working-class Black people.

About 1,000 people rallied in Huntsville under the slogan, “My Body, My Choice,” at Butler Green Park May 19. The rally had to be moved from its original site because so many people indicated they would attend.

On the same day, in downtown Birmingham, 2,000 people joined the March for Reproductive Freedom from Kelly Ingram Park. Doctors wearing white coats expressed outrage at the ban’s criminalization of physicians who perform abortions. The march ended in a rally at the park, a site of many famous protests for justice over the years, including the 1963 Children’s March for Black civil rights and the 2011 Una Familia, Una Alabama rally against the state’s “Juan Crow” anti-migrant law.

The Montgomery March for Reproductive Freedom began May 19 at the Court Square Fountain. The location is historically significant as the city’s main area where enslaved African people were sold. It’s just a few steps from the corner where Rosa Parks challenged racist segregation in 1955 by refusing to move to the “back of the bus.” One marcher protested using religious beliefs to justify condemn the abortion ban, saying: “There’s separation of church and state for a reason, and [they’re] bringing the church into the Legislature.” (tinyurl.com/y3hfc6nt)

A popular chant from the people fighting for reproductive rights and justice for all in Mobile was “One voice! Pro-choice!”

The call signifies a growing unity among the working class against the repression that we are fighting to eradicate. There’s no doubt that this struggle for reproductive justice will continue!