May 6 — The attempted coup in Caracas on April 30 made it obvious that anti-imperialists in the United States must steel themselves for a protracted struggle against the U.S. ruling class and its aggressive designs on Venezuela. 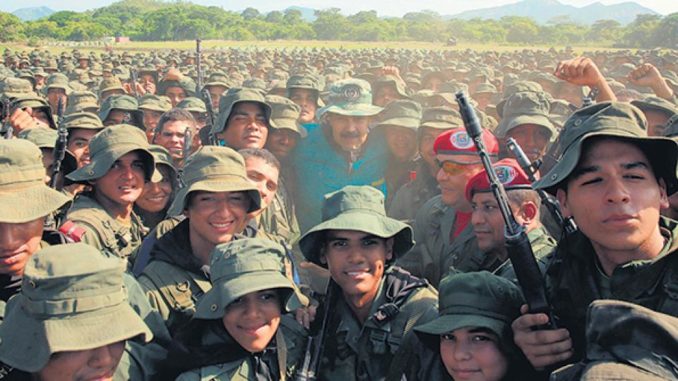 President Nicolás Maduro in midst of troops of the FANB on May 4 at El Pao, Cojedes.

The right-wing opposition inside Venezuela and its spokespeople — Juan Guaidó and Leopoldo López — have shown themselves to be unable to overturn the Venezuelan government. The people of Venezuela, the government of President Nicolás Maduro and the National Bolivarian Armed Forces (FANB) defeated each of the three coup attempts this year. The remaining alternative is direct U.S. military intervention.

Speaking on ABC television’s “This Week” on May 5, Secretary of State Mike Pompeo said the administration is making contingency plans for military intervention in Venezuela. He added that he didn’t believe it was necessary to go first to Congress for approval.

In an interview with the Washington Post published May 5, Guaidó said that if offered a U.S. military intervention by John Bolton, he would discuss this offer in the National Assembly. He thus admitted that the only way he could seize the government is with the help of U.S. planes, tanks and troops.

This means that anti-imperialists in the United States have an increased responsibility to prevent a U.S. military attack at the same time that they oppose economic sanctions and diplomatic pressure. This is a severe challenge, especially because the U.S. ruling class, its representatives in both major capitalist parties and the corporate media are all lined up against the Venezuelan people.

First this movement must battle media lies. Both pro- and anti-Trump sectors of the corporate media are spewing the most vicious and unsubstantiated lies and slanders in order to vilify elected Venezuelan President Nicolás Maduro and his supporters.

In addition, “Not a single commentator on the big three Sunday morning talk shows or PBS NewsHour came out against President Nicolás Maduro stepping down from the Venezuelan government.”

Another example was CNN anchor Jake Tapper tweet on May 1: “Maduro government mows down citizens in the streets.” The photo attached to Tapper’s tweet showed Guaidó’s own troops firing guns, so Tapper had to take back that lie.

As for the pro-Trump media, Fox News published the May 1 headline, “Russia put nuclear weapons in Venezuela” — a complete invention.

The media unanimity indicates that the U.S. ruling class and its strategists see aggression against the Chavistas as essential to its imperialist interests. They defend it despite their lack of confidence in the mediocre gang of war criminals Trump has recruited to his White House to head U.S. intervention. The media gave similar support to George W. Bush’s criminal invasion of Iraq in 2002-03 — only to walk it back over the years when Iraqi resistance made that invasion costly.

Not only the anti-Trump media but also Democratic politicians support U.S. aggression against Venezuela. Among leading establishment Democrats, Joe Biden, now running for president, and House Speaker Nancy Pelosi have both attacked the Venezuelan government. These attacks align the leading Democrats with the most reactionary elements of Trump’s Republican White House.

Not only Republicans but establishment Democrats call Maduro “repressive” for countering the coup attempts. No one in the anti-war movement should fall for these lies. Consider that the French president has put more Yellow-Vested people in the hospital in one weekend for demonstrating in his country than President Maduro and the Chavistas have injured while opposing three U.S.-backed attempted coups.

The Venezuela crisis exposes the obstacles for progressive politicians to work within the Democratic Party. When the National Review asked on May 3 for her position on the attempted coup in Venezuela, Rep. Alexandria Ocasio-Cortez gave no comment but “deferred to the Democratic caucus.”

The implication is that, in order to work with the party on domestic programs like “The Green New Deal” and “Medicare for All,” progressive politicians must concede to the pro-imperialist policies of Democratic Party leaders.

The Bolton-Abrams-Pompeo-Rubio gang and their Venezuelan puppets flopped this week for the third time in an attempted overthrow of the elected Bolivarian government. It took only 12 hours on April 30 for right-wing conspirator Leopoldo Eduardo López to go from co-announcing a coup in support of presidential pretender Guaidó to seeking somewhere to hide, first in the Chilean and then the Spanish Embassy in Caracas.

On May Day, while Guaidó managed to get some backers from the wealthier Caracas neighborhoods into the streets, far more Chavistas came out to defend Nicolás Maduro’s government. On May 2, President Maduro met with 4,500 officers on a base in Caracas, calling on them to go into combat to defend their country from the imperialist threat. Two days later he was photographed in the midst of thousands of soldiers at El Pao, Cojedes.

Maduro told the FANB troops, “We are involved in a battle against imperialism, traitors and coup-makers, a battle on all fronts, along the entire line, for the defense of our dignity, our honor, the right of our republic to exist along with our national identity. The FANB must show to our people that it is united, cohesive, more and more disciplined, subordinate to constitutional command, more and more obedient to these principles and values. It has to show itself as a national force for peace, democracy, constitutional and Bolivarian rule.” (pagina12.com.ar, May 3)

Inside the United States

Many of the International Workers’ Day, May Day, demonstrations in the U.S. this year raised defense of Venezuelan sovereignty against U.S. imperialism.

A center of struggle in defense of Venezuela these days is the Venezuelan Embassy in Washington, D.C. The Bolivarian government, which had used the embassy, left after breaking relations with the United States earlier this year and turned the office over to U.S. individuals and groups who oppose U.S. intervention. These groups have been occupying the embassy to keep it out of the hands of Guaidó’s forces.

On May 1, the people inside were able to keep out Guaidó’s so-called ambassador, Carlos Vecchio, and beat back the coup supporters, just as they were defeated in Venezuela.

The next day, pro-rightist and pro-fascist Venezuelans living in the U. S. who support Guaidó launched a sustained attack on the occupiers. Police arrested two people from the Embassy Protection Collective and beat at least one of them. The authorities are preventing food and water from reaching those inside the embassy. The struggle for the embassy continues as of May 6.

The threat to Venezuela remains, despite the lack of popular support in Venezuela for the rightists, the continued support of the National Bolivarian Armed Forces for the constitutional government and the reluctance of even the most right-wing U.S. client regimes in South America — in Colombia and Brazil — to risk military intervention

And so does the responsibility for anti-imperialists in the United States to defend the Bolivarian government from U.S. attack, including death-wielding economic sanctions and mercenary warfare.

To take a stand against U.S. economic sanctions on Venezuela, go to