The following translated article was originally published at pagina12.com on April 30. 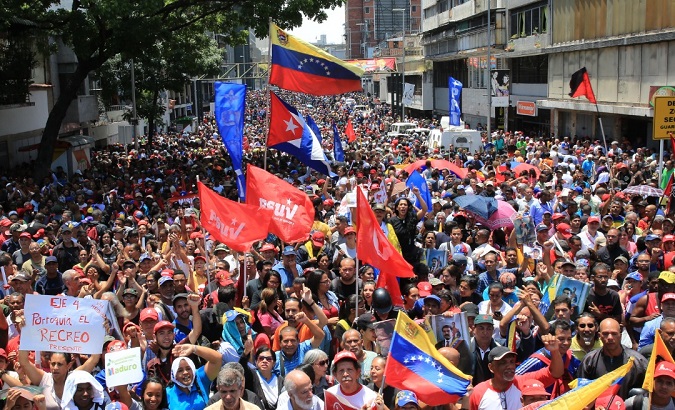 At 4 a.m. on April 30 a small group of members of the National Bolivarian Armed Forces (FANB), estimated at 100 and identifying themselves with a blue flag, led the beginning of a new coup d’état attempt. The movement had two principal elements: the appearance of Leopoldo López, leader of Juan Guaidó’s Popular Will party, and the movement of a group of FANB members wearing blue bands into Altamira, the principal zone of right-wing mobilizations in Caracas.

Communications Minister Jorge Rodriguez, FANB commander Vladimir Padrino López and president of the National Constituent Assembly Diosdado Cabello, among others, affirmed in the first hours that the La Carlota base had not been taken and that the barracks throughout the country maintained their support for President Nicolás Maduro.

Guaidó affirmed that this was the definitive phase of what he has called “Operation Freedom.” The military attempt counted on international public support from the North American government, through Mike Pompeo; the Colombian president, Iván Duque; the Argentinian government, through chancellor Jorge Faurie; the secretary of the Organization of American States, Luis Almagro; the president of the European Parliament, Antonio Tajani; and others.

The government of the Spanish state, for its part, rejected the violent attempt: “It should be made clear that Spain does not support any military coup.”

The new assault appeared with a media intensity that does not correlate with the military capability in the territory. Neither has there been, up to this point, a supportive response from the opposition population in the streets to back up the soldiers.

The situation in Caracas, with the exception of the two epicenters and social media, presents a tense tranquility. Government supporters have begun to mobilize at Miraflores Palace to back up President Nicolás Maduro and democracy and to reject this new moment in the coup d’état attempt.