On April 30, The People’s Forum called a press conference in New York City in response to developments that day in the ongoing coup attempt in Venezuela. Among the community leaders who demanded the U.S. government cease all intervention in Venezuela were Rev. Claudia de la Cruz of The People’s Forum, who chaired the event; Rev. Dr. Liz Theoharis, co-chair of the Poor People’s Campaign; Rev. Dr. Luis Barrios, professor at John Jay College of Criminal Justice; Rev. Juan Carlos Ruiz of the Sanctuary Movement; Ben Becker of the Answer Coalition, and Omar Freilla of Green Worker Cooperatives. The event was covered by national news channels, including ABC, CBS, NBC and Telesur, and live-streamed by New York’s local Channel 7.

The following slightly edited remarks were delivered at the press conference by Sara Flounders, co-director of the International Action Center. 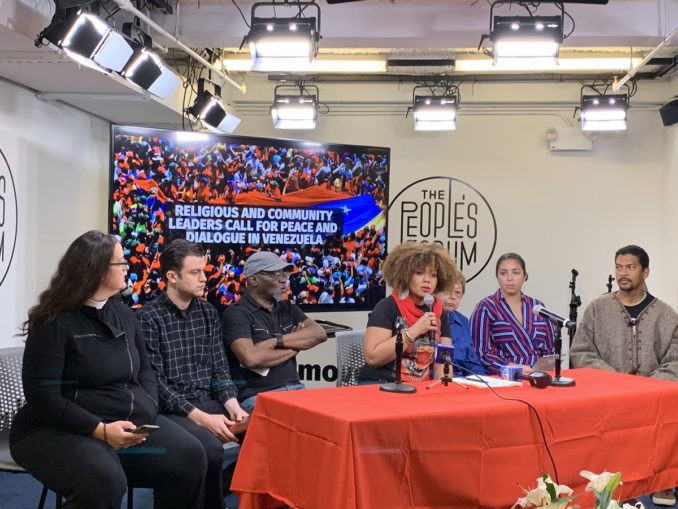 Speaking for the International Action Center and the No War On Venezuela Campaign, we can say confidently that people all over the world stand with Venezuela today.

At the time of the U.S.-orchestrated crisis at Venezuela’s border on Feb. 23, millions of people mobilized in Venezuela to defend their country. Joining them were people in 153 cities around the world who organized solidarity actions with Venezuela.

This latest, frantic effort by the U.S. to overturn the democratically elected government of Venezuela will fail just as every past effort has failed.

I have been watching online videos from Venezuela all morning and have seen tens of thousands of people gathering in front of the Presidential Palace in Caracas, ready to defend their president, their constitutional government and their country.

The people are in the streets now en masse, called out by their own community councils. The videos show that they are well organized and very determined. The national military remains patriotic and firm. All are determined to build a shared future without U.S. colonial and imperialist domination.

On my recent visit to Venezuela, I saw people mobilizing in masses, in the millions. They gathered together in People’s Community Councils, Collectivos, People’s Communes — and in the 2-million-strong armed People’s Militia. All of these represent the power of the Venezuelan people organizing in their own name and for their own good.

Today’s Wall Street-backed coup effort is happening on April 30 because this is the eve of May Day — and May Day all around the world stands for mass mobilizations of People Power.

And that is exactly what Wall Street wants to push back everywhere, including Venezuela — mobilized People Power.

The U.S. coup efforts are attempts on a grand scale at piracy and looting of resources that should belong to the Venezuelan people. They are a violation of the U.N. Charter, international law and U.S. law. Meanwhile, big-business media repeat U.S. state propaganda and blank out the truth of how life has improved for the poorest and most oppressed in Venezuela under the Bolivarian government.

We denounce U.S. war, including war on the Venezuela people — war by strangulation through sanctions, by direct and indirect military attacks. The U.S. is involved in endless wars launched from 800 U.S. military bases around the world.

All of these atrocities and injustices are paid for by the internal war on working and oppressed people in the U.S. People here desperately need the resources and assistance that could be paid for with the billions sunk into endless war.

Right now, solidarity activists in Washington, D.C., are courageously defending the Venezuela Embassy. Right-wingers who back the U.S. coup are trying to take over the embassy, the property of the democratically elected Venezuelan Government.

Show solidarity with Venezuela in whatever way you can — the crisis is now!

As for us, on May Day we will be out in force on Wall Street — to fight for working people here and to defend Venezuela and its people.