The gang that announces Washington’s policies has laid out a program of punishment, aimed at populations of countries on three continents. Any honest international court would charge them with crimes against humanity. 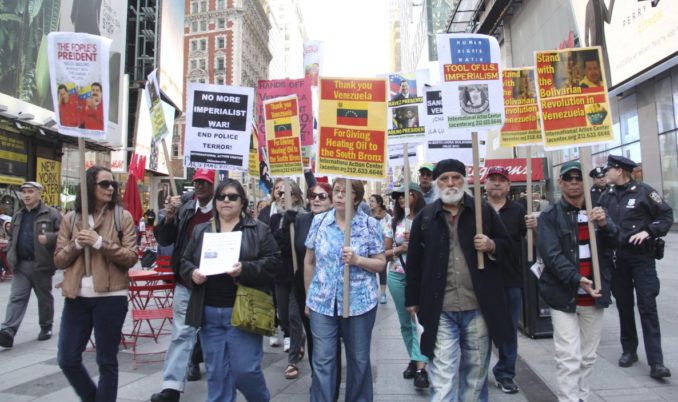 Secretary of State Mike Pompeo, National Security Adviser John Bolton and President Donald Trump declared at different times in March and April that there will be new, harsher sanctions on Venezuela, Cuba and Nicaragua.  Sanctions against Zimbabwe will be extended another year and Iran will not be allowed to export oil.

Existing sanctions directed at Russia bring in a fourth continent, Europe. In addition, companies in European Union countries that have begun to do normal business with, for example, Cuba or Iran, face U.S. economic punishment.

To impose its decadent and now decaying domination on the rest of the world, U.S. imperialism uses its still pre-eminent destructive military power — with 800 bases on all continents — along with its propaganda machine and its waning but still impressive economic power.

Remember the sanctions against Iraq that began in 1990, continued under Republican and Democratic administrations, and ended only with the U.S. invasion in 2003. In that period sanctions were responsible for the deaths of 1.5 million Iraqis, including 500,000 young children.

The war machine kills quickly. Sanctions, even if slower, are as deadly as invasions.

In this hemisphere, imperialism’s economic weapons target Venezuela, Cuba and Nicaragua with the goal of overturning their sovereign governments. In Cuba’s case the socialist government has defied the U.S. sanctions, blockade and direct aggression for 60 years. Bolton, Pompeo and Trump’s goal is to make the populations of those countries suffer so much that they revolt and overturn their governments.

But sanctions don’t always change government policies or remove governments. Reactionary imperialist politicians like Bolton and Pompeo often underestimate the determination of the masses or their governments to resist subjugation. The plans of the U.S. criminals may fail.

Sanctions, however, nearly always make the population suffer, with the poorest and most vulnerable hurt most — unless they are protected by a popular socialist government such as Cuba’s.

Part of the current new wave of sanctions, said Bolton, is aimed at stopping the delivery of oil from Venezuela to Cuba, hurting the people of both countries. Bolton didn’t say if he was involving the U.S. Navy in this type of blockade, which is an act of war.

The governments of all the countries involved have declared their determination to confront U.S. sanctions without changing their principled policies. Cuban President Miguel Diaz-Canel said it well on Twitter: “Those who hold a sword against us will not change our attitude. We Cubans do not surrender. … In Cuba, Cubans rule.”

In that same spirit, anti-imperialists in the U.S. have to treat U.S.-imposed sanctions the same way we treat U.S. wars and threats of war. We must mobilize to resist them. And on the basis of the administration’s criminal sanctions, our own goal can be to charge this gang of cutthroats with crimes against humanity.