The White House currently behaves like a bungee cord, with up and down proclamations that change day-by-day and the threat of major edicts that may go nowhere — befuddling his audience.

One day Donald Trump threatens to immediately shut down the Southern border; another day to cut aid to Central America right away. The ever-revolving door of White House staff could cause a small tornado as both high- and lower-level officials come and go. 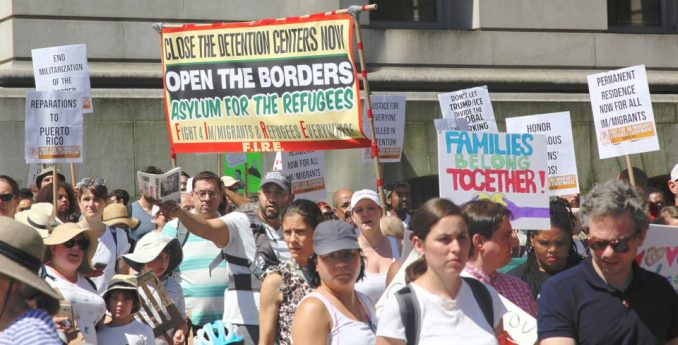 The latest is the resignation on April 7 of Homeland Security Secretary Kirstjen Nielsen.

All this occurs as migrants face increasingly more desperate conditions that need immediate, humane and just solutions. Despite the chaos at the White House, Trump’s war against migrants is frankly succeeding. Families are divided, children are missing, massive migration continues, along with super-exploitation at work, depressing concentration camps and deaths that include small children. Imperialist policies, lamentably, have the upper hand for now.

Trump announced on April 2 that he would be cutting aid to three Central American nations: Guatemala, El Salvador and Honduras, known as the Northern Triangle. That night the State Department informed Congress that $450 million that would normally go to these countries would be diverted elsewhere.

Yet, the day before Trump’s announcement, Nielsen had just signed a regional agreement with officials from the three countries that they would “conduct joint police operations and fight unauthorized migration.” The next morning, however, President Trump was, once again, criticizing those countries, as well as Mexico, for the record levels of family migrations to the U.S.

According to the State Department website, the U.S. government spent over $2.6 billion in aid to the Northern Triangle during fiscal years 2015-18.  So the mere cutting of $450 million appears to be posturing more than anything.

Democrats and others who opposed the cut claimed that the very programs geared to prevent the social violence, poverty and hunger that cause migration would suffer. But you don’t have to be an economist to know that this money has done nothing to stop forced migration.

For decades, the U.S. government has stolen tax money from the people in this country and used it to create terror abroad, including in the Northern Triangle.  The money has not been used to prevent hunger, but has served to line the pockets of U.S. agribusiness, sweatshop owners and the Pentagon.

The U.S. Global Leadership Coalition, an imperialist grouping of former government officials, admits that in “Guatemala and Honduras, half the country lives in poverty, … nearly one-third of the youth is unemployed and not in school.”  It states that many are forced to flee for “lack of food.”

So the decades of aid have not at all helped the people of the region, even by this ruling-class consortium’s own admission.

According to the April 2 New York Times, “Of the Northern Triangle nations, Guatemala receives the most aid. … [A]ccording to the Washington Office on Latin America, … the most recent figures for 2017 [were] more than $78.6 million.”

That is a lot of money for a small impoverished nation.

In the 1980s, for example, Washington orchestrated a bloody war against the Indigenous people of Guatemala, who were boldly organizing and included a guerrilla organization. The Pentagon, through their lackeys, carried out a genocidal war against the Mayan and Indigenous population. At least 600 villages were destroyed, more than 200,000 people were killed, thousands were disappeared, and millions were displaced. (PBS.org)

Combat Genocide website states: “Six hundred and twenty-six massacres by the Guatemalan army have been documented.” On July 18, 1982, President Ríos Montt was quoted in the New York Times as saying to the Mayan public, “If you are with us, we will feed you; if not, we will kill you.”

And in Honduras the State Department — overseen by Democratic Secretary of State Hillary Clinton — orchestrated a coup in 2009 against the progressive President Mel Zelaya, ushering in a right-wing, pro-imperialist government. Journalists, women, trade unionists and anyone fighting for justice are threatened or killed. People’s heroes such as Berta Cáceres, an Indigenous Lenca leader fighting the destruction of the Earth, and Margarita Murillo, a peasant leader unabashedly organizing workers, were murdered by the Honduran state.

Clearly, if Washington wants to stop forced migration it should get out of the Northern Triangle altogether and pay the reparations it owes.

Imperialist conditions will continue to force workers out of their homelands.

Once they arrive at the Southern border, Central Americans, despite “legally” being able to apply for asylum under current U.S. immigration laws, are forced to wait in deplorable conditions inside temporary camps on the Mexican side of the border.

If they are allowed in, they are rounded up and put in what amount to concentration camps. In El Paso, thousands were forced to live under a bridge, fenced in with barbed wire.

Children continue to be taken from their parents, who are often deported while their children remain in the U.S. This is the kind of atrocity the U.S. government carried out against Native American children in an earlier period.

Another example of white supremacist — and misogynist — policy is given in a Harper’s Bazaar article published April 2. This must-read article, written by Jennifer Wright, is titled: “The U.S. Is Tracking Migrant Girls’ Periods to Stop Them from Getting Abortions.” This is some really weird “Handmaid’s Tale” stuff. Wright points out: “We still don’t know where 1,488 children are … but by God, they can keep track of teenage migrant girls’ menstrual cycles.”

At all levels the war on migrants continues.

But in every war, repression breeds resistance. Migrants and workers in the U.S. will rise again to end the war against the working class. On May Day, the demand for “No Wars, No Walls in the Workers’ Struggle” will surely resonate around the world.