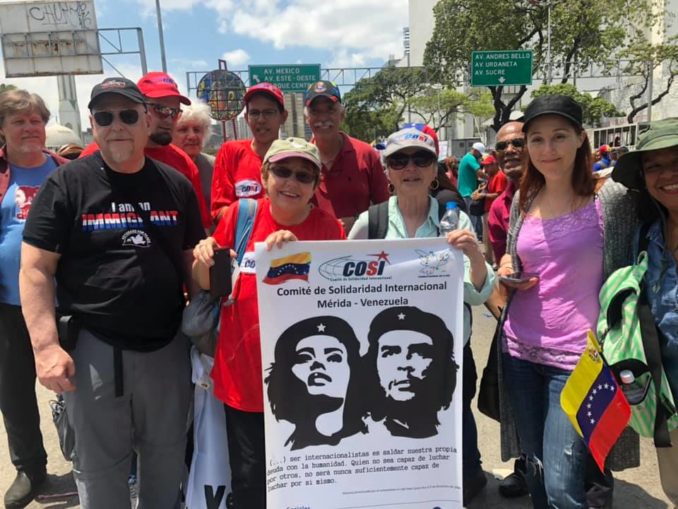 The two presidents made the real purpose of their meeting in Washington, D.C., very clear, however, with much of their conversation focused on regime-change efforts in Venezuela. Bolsonaro had even visited the CIA before his meeting with Trump, and Trump mentioned in their joint press conference that he would support Brazil joining NATO, the imperialist military alliance.

The last major expansion of NATO was only possible through the 1999 war that fractured Yugoslavia. It seems that imperialism is prepared to start a new war in Latin America, specifically in Venezuela, to carry out another strategic expansion.

Trump alone cannot make the decision to add Brazil to NATO, but the U.S. has the biggest economy and military in the alliance. Brazil wouldn’t be the first Latin American country in NATO, since Colombia joined as a “global partner” last year.

Colombia has a long history of cooperation with imperialism and is considered one of the most loyal U.S. puppet states. Brazil, however, was until very recently an important ally of the Bolivarian Republic of Venezuela.

The 2016 parliamentary coup against Dilma Rousseff and the imprisonment of former president Luiz Inácio Lula da Silva, who at the time was running in the 2018 election and projected to easily defeat Bolsonaro, were important steps in imperialism’s plan to isolate and threaten Venezuela.

The struggle for a continent’s future

The list of imperialist operatives running the regime change efforts in Venezuela, including Elliott Abrams, John Bolton and Sen. Marco Rubio, are fully aware of what is at stake. Seizing Venezuela is the first step in conquering what they have called a “troika of tyranny.” The next targets are Cuba and Nicaragua.

The conflict is not just between Bolivarian Venezuela, defending its sovereignty and its social base of workers and oppressed, and the specter of the 20th century Venezuela, tightly controlled by a racist oligarchy in the service of U.S. imperialism.

The battle in Venezuela is just one part of a broader war for the entire continent of Latin America.

Recently, anti-imperialist activists and progressive journalists from the U.S. and Canada returned from a U.S. Peace Council delegation to Venezuela. They visited several community projects and met with social movements.

At one point they had a meeting with President Nicolás Maduro, who mentioned that in addition to being a struggle between socialism and capitalism, the current moment was a chapter in a “200-year struggle between Bolívar and Monroe.”

James Monroe was the U.S. president from 1817 to 1825. He is only really mentioned in relation to the so-called “Monroe Doctrine,” which was at the time little more than a U.S. desire to replace Europe as the economic ruler of Latin America. It took the U.S. ruling class some decades to make this a reality with the 1898 Spanish-American War. This war ended with the seizure of Puerto Rico as a direct U.S. colony and the creation of “independent” but economically controlled states in Cuba and the Philippines.

From there, the U.S. steadily expanded its hegemony over the region until  World War II left the European imperialist countries devastated. From that point forward the Monroe Doctrine took on its current form: “Latin America is the backyard of the U.S., whose word is law.”

Simón Bolívar (1783-1830), on the other hand, had several political principles unique among the various Latin American independence leaders. Unlike most of the settler colonial elites who rebelled against Spain, Bolívar was interested in more than selling his country of Venezuela to Britain (later replaced by the U.S.). Bolívar’s dream was the “Patria Grande,” the “Grand Homeland,” a Latin American union no longer dependent on imperialist power.

Bolívar was also unique for opposing slavery, despite being from a relatively privileged class in a country that relied on slave labor. Early on in his military campaign he abolished slavery after receiving troops and equipment from the Haitian revolutionaries, the original independence movement in the hemisphere.

It’s no accident that the Venezuelans have chosen the term “Bolivarian” to describe their revolutionary process. Bolívar’s ideals pervade every aspect of the revolution, from basing itself in the poorest and most oppressed sectors of society to the grand vision of Latin American unity.

After so many centuries of European and later U.S. domination, the peoples of Latin America are fighters, and relentless ones at that. That’s why the U.S. has to resort to dirty wars, economic blockades, sabotage and all the other forms of attack they have used against Venezuela. But they have also used their influence in the region to gather their right-wing puppets into the Lima Group to attack defiant countries in the region.

If the conflict on a regional scale is between Monroe and Bolívar, members of the Lima Group are Monroe’s lap dogs. These are right-wing governments completely domesticated by imperialism. While they join together to threaten Venezuela on one hand, on the other they violently repress their own peoples to ensure profits for North American corporations.

The two Central American countries in the Lima Group, Guatemala and Honduras, are experiencing massive emigration as a result of right-wing policy. In Guatemala, the right wing was put in power through a coup d’état in 1954 and a subsequent civil war. In Honduras the coup d’état was more recent, in 2009.

In both these countries transnational corporations routinely conspire with the state to assassinate Indigenous and campesino leaders like Berta Cáceres in Honduras. Mining companies and large infrastructure projects steal land from Indigenous peoples and destroy the environment. Most people work seasonally on large plantations, harvesting export crops for poverty wages.

In Brazil, Bolsonaro’s racist, anti-LGBTQ and pro-military dictatorship politics have opened the door for all kinds of repression and against the land rights of Indigenous peoples in the Amazon. His economic plans are the same as those of the rest of the Latin American right wing: privatization and unchecked neoliberalism. In essence, the state exists only to advance the interests of the transnational corporations and to repress workers and Indigenous peoples.

Colombia has been controlled by imperialist puppets for so long that it is on the verge of collapse. Government corruption is rampant, most elections have been thinly disguised fixes and paramilitaries control large portions of the rural provinces.

This week, the Colombian army opened fire on Indigenous protesters in the Cauca region. The city of Cúcuta, on the Venezuelan border, had been crafted into a hotbed for covert activity against Venezuela. With the border, along with currency exchange houses, closed, Cúcuta’s economy has begun to collapse.

In every one of these countries, as well as other Lima Group members like Chile, Peru, Ecuador and Argentina, there are growing social movements rising up against the repression and suffering imposed by imperialism. Some of these groups also understand the continental scale of the fight and have mobilized in support of Bolivarian Venezuela.

Every day the battle lines become clearer and the social movements of the Americas take their position. When the struggle between imperialism and the popular masses is as sharp and as widespread as it has now become, there are only two paths left: a return to the brutal military dictatorships of the 20th century or the liberation of the entire American continent, just as Bolívar once hoped.