“[T]he Cuban woman, in the dark and quiet corner of the home, awaits … the hour, in which a revolution breaks its yoke and spreads its wings. Everything was enslaving: origin, color, sex. [You must] destroy … it by fighting to the death. You have destroyed the slavery of color by emancipating the slave. The time has come to liberate the woman!”

These words were spoken in 1869 by Ana Betancourt, a revolutionary who played a leading role in Cuba’s war of independence from Spain.

Betancourt, along with Mariana Grajales of Dominican and Jamaican origins, and referred to as the “Mother of Cuba,” are just two of so many women whose roots of rebellion nurture Cuban soil.

Given this history, it is no surprise that every year when the Federation of Cuban Women arrive in New York City for U.N.-related events, the solidarity movement pours out to welcome them.

Their presence is enriched by the fact that these are people in the process of building a socialist society. How can activists miss this opportunity? 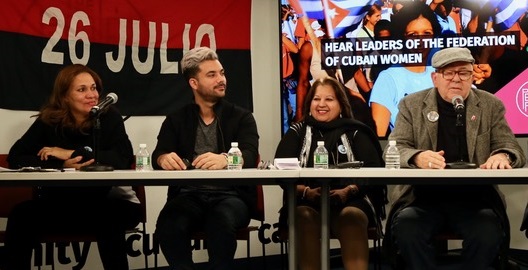 This year, the International Working Women’s Day event was also broadened to include other important and historical leaders of the Cuban Revolution who came for U.N. events.

Miguel Barnet, founder of the National Union of Writers and Artists of Cuba (UNEAC); Luis Morlote of the Union of Jurists; Manuel Vazquez of the Cuban National Center for Sex Education (Cenesex); and Yenisey Gonzalez, in charge of foreign relations for the Federation of Cuban Women (FMC), joined Teresa Amarelle Boué, secretary general of the FMC, who opened the program on March 16 at the Peoples’ Forum in New York City.

Barnet is a noted author and intellectual of the Revolution who founded UNEAC so that artists could also be organized to serve the Revolution.

Amarelle Boué not only spoke of the gains for women in Cuba but also alerted the Cuba solidarity movement to new developments from the Trump administration.

On March 15, the U.S. announced it would be eliminating 5-year tourist visas for Cubans. This will have drastic negative effects on the economy and will especially affect Cubans who have family in the U.S.

These valued visas are used to visit relatives as well as to buy supplies that are not readily available in Cuba due to the continuing U.S. blockade. The new policy means that Cubans will be forced to make a third-country visit every time they come to the U.S., costing more money and more time.

A March 14 article in the Cuban newspaper Granma emphasized that the Helms-Burton Act, which this new policy is part of, is “meant to re-colonize Cuba” and that Trump is “dusting off the law’s Title III to tighten the blockade and dissuade foreign investors in Cuba.”

The tightening of the blockade follows hostile U.S. propaganda against Cuba regarding Venezuela. The U.S. claims that Cuba is behind President Nicolás Maduro’s success in resisting imperialist attempts to oust him.

Cuba does stand in complete solidarity with the Bolivarian Revolution of Venezuela, as do China, Russia, India and many other countries. For instance, Cuba has sent doctors to Venezuela, angering the elite in the U.S. and in Venezuela. As always, Cuba sends doctors, the U.S. drops bombs — or attempts coups.

The U.S. attempts to sabotage the Cuban Revolution have never succeeded. One major reason is Cuban women.

Amarelle Boué reported: “Today, women represent 53.22 percent of deputies in the National Assembly of People’s Power and 48.4 percent of members of the Council of State. They make up 60.5 percent of higher education graduates and 67.2 percent of specialists and professionals throughout the nation.”

These advances are based on the demands by women and also on the political will of the government to meet those demands.

“We have been, as Fidel said, a revolution within the Revolution,” Amarelle Boué noted.

As an example that neither the Revolution nor the Federation of Cuban Women is static, the 10th Congress of the FMC, recently held on March 6-8, took up the theme “not to neglect the gaps that remain, nor the challenges that lie ahead,” as well as emphasizing the need to be “more flexible, more dynamic” and “adapt to the times.”

As “women of their time,” the FMC Congress was organized in a more dynamic way, closer to the grassroots. The goal of the federation is to “win the hearts and wills” of young people so that they “continue to love” the work of the Revolution.

A major item for the Federation is gender equality, a major point of discussion at the Congress.

Amarelle Boué, as well as the speaker from Cenesex, pointed out that although there has been huge progress on gender equality, sexist patterns still predominate. For example, in a major survey of almost 20,000 Cubans, 74 percent stated that “each individual’s sexual orientation should be respected,” but only half accepted same-sex marriage.

Cenesex, founded by Mariela Castro, has made huge efforts to advance this cause. And as U.S. LGBTQ activists point out, Cuba has made more advances in 60 years on this question than has the U.S.

It’s important to note that while there are, sadly, countless killings of trans people in the U.S., there are virtually none in Cuba.

The Cuban Revolution is so strong. This writer noted at the FMC event that a Cuban diplomat assigned to the U.S. who accompanied the delegation stood at the back of the room.

As he listened to his comrades on the stage, his face expressed such a look of pride and love as they spoke of their work in the Revolution. A diplomat in a suit, agricultural workers, women who work at home, LGBTQ people who march at Pride in Cuba — all defend the Revolution.

As Amarelle Boué said: Cubans are defending their Revolution. The Cuban masses will never give up on socialism. History has shown this.