For a decade, beginning in 1990, the U.S. and Western European propaganda machines indoctrinated their populations to support a war of aggression against Yugoslavia, which started on March 24, 1999. 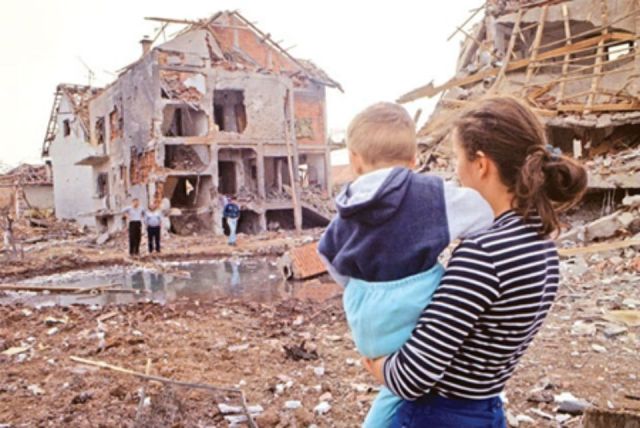 Yugoslav mother views wreckage of homes after NATO bombing in 1999

Now, on the 20th anniversary of that war, it is valuable to review how the various NATO powers carried out the process of war preparation. What makes it especially important today is the fact that similar steps are being taken to prepare the way for an assault on Venezuela — which can still be stopped.

Demonstrations will take place over the next two weeks to highlight the importance of those events 20 years ago. On Sunday, March 24, the International Action Center is holding a rally at the U.N. headquarters in New York to commemorate and protest the 20th anniversary of the start of the criminal U.S./NATO 78-day bombing campaign that killed 3,000 people and tore apart Yugoslavia. (iacenter.org)

And on Saturday, March 30, the United National Antiwar Coalition will march in Washington, D.C. Although the march had been originally timed to coincide with the beginning of NATO’s 70th anniversary meeting there, current events have driven the anti-war organizers to focus on solidarity with Bolivarian Venezuela, under the slogan “U.S. hands off!” (unacpeace.org)

From 1990-99, the NATO powers — with German and U.S. imperialism in the lead — were taking every step to weaken and destroy Yugoslavia.

From the start, Berlin aided reactionary separatist forces in each republic of the multinational socialist federation of Yugoslavia. This gave rise to wars in Croatia and Bosnia-Herzegovina, along with the separation of Slovenia and Macedonia. Since German imperialism had the closest contacts with the Croatian and Bosnian reactionaries and the largest economic interests in the region, this initiative put German imperialism in the lead of seizing influence in the Balkans.

To regain hegemony over Berlin and the other NATO powers, Washington pushed the conflict toward open war, where the Pentagon’s preeminent place in destructive power would predominate. The U.S. used a battle provoked by the “Kosovo Liberation Army” at the town of Račak in the Kosovo province of Serbia on Jan. 15, 1999, as a pretext. Claiming it was a massacre, the Bill Clinton administration played up the need for “humanitarian intervention.” (Sound familiar?)

Clinton stepped up the drive toward war. With support from Germany and France and using bases in Italy, the U.S. began bombing and firing missiles at mainly civilian targets in Serbia on March 24. The bombing lasted for 78 days and killed 3,000 people. Bridges, schools and hospitals were hit, along with the Chinese Embassy in Belgrade and Yugoslav television and radio studios. 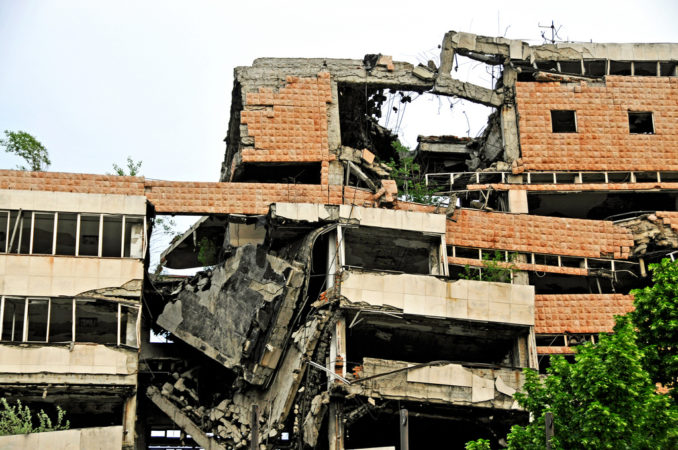 Heroism in defense of Yugoslavia

Many of the residents of Serbia and Montenegro — whether Serbs, Roma, Jews or other Yugoslav peoples — showed their heroism during the 78 days of open war. They walked in open spaces and defiantly defended bridges wearing T-shirts with targets on them. Those in the military were ready to fight and camouflaged their equipment so well that the bombing destroyed few tanks.

Parents sent their children to grandparents in the villages, while carrying on their work in the major cities.

Under the pressure of the destructive bombing and even more blatant threats of invasion, the Yugoslav government finally conceded and accepted NATO’s terms. Even the accepted terms, however — which included the Kosovo province remaining part of Serbia — were ignored by the victorious NATO military power.

What had been a sovereign, independent and socialist Yugoslavia was turned into six weakened semicolonies of the West and the tiny U.S. military outpost called Kosovo. Today the existence of an “independent” Kosovo is an obvious fraud, as the territory is little more than a massive military base for the U.S. and a mini-homeland for organized crime.

Since this criminal war against Yugoslavia, NATO has expanded its intervention against Libya in Africa and Afghanistan, Iraq and Syria in Asia. Its current target is Venezuela in South America — using another “humanitarian” pretext.

To add to the crimes of the imperialist powers in the Balkans, they blamed the victims of this aggressive war. The leader of the resistance to the NATO assault, Slobodan Milosevic, Yugoslavia’s president from 1997 to 2000, was kidnapped and put on trial in The Hague.

In an act of individual heroism, Milosevic turned the tables and put imperialism on trial. In the end, the international court was unable to prove any crimes against the Yugoslav leader. But he remained in prison, and the case ended with Milosevic’s death behind bars in 2006.

Since NATO’s intervention against Yugoslavia, the U.S. has turned the alliance into a type of imperialist police force. No longer confined to Europe, NATO has become a worldwide intervention force at the service of the transnational monopolies that exploit global labor and resources.

As the U.S. wages a propaganda and subversive war against Venezuela, anti-war people throughout the world should remember the lessons of the assault on Yugoslavia and prepare for struggle.