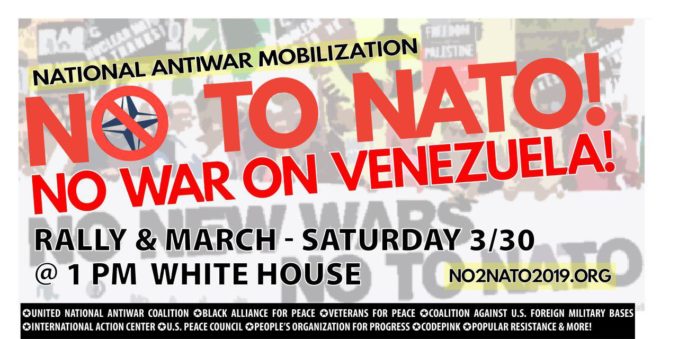 Members of the North Atlantic Treaty Organization will celebrate the 70th anniversary of NATO’s founding on April 4 in Washington, D.C.

Anti-war groups are organizing at least three actions as that date approaches to protest U.S. aggression and the NATO military alliance’s criminal role in wars worldwide. NATO now kills people in Asia and Africa, besides in its historical European region, and threatens to intervene in South America through its Colombian “global partner” and possible future member.

On Saturday, March 16, there will be a demonstration in Washington that the Answer Coalition has called in solidarity with Venezuela and in opposition to intervention by the U.S. and its lackeys against the Bolivarian Revolution. (tinyurl.com/yycnac3k)

On Sunday, March 24, the International Action Center is holding a rally at the U.N. headquarters in New York. The action will commemorate the 20th anniversary of the start of the U.S./NATO criminal 78-day bombing campaign that killed 3,000 people and tore apart Yugoslavia. (iacenter.org)

And on Saturday, March 30, the United National Antiwar Coalition is holding a protest demonstration in Washington, timed for the beginning of the NATO celebrations. Given the current crisis in South America, this protest will also focus on solidarity with Bolivarian Venezuela. (unacpeace.org)

NATO: an alliance of oppressors

U.S. ruling-class politicians of both big capitalist parties and all the corporate media have always claimed NATO is an alliance of “democratic” powers with the goal of keeping peace. This is a lie worthy of the worst of the Trump administration.

NATO’s major members in 1949 were the United States, France, Britain, Italy and Canada; Germany has been a member since 1955. These six historic colonial powers and settler states, plus Japan, make up the G-7 (Group of Seven) countries that currently set economic rules and dominate most of the world.

The corporate and financial ruling classes of the major NATO powers, despite the current challenge from People’s China, control the bulk of the world’s wealth, mainly through their banks. The capital they control exploits labor and extracts resources throughout the world. Add to this their control of finance, technology, weapons and mass media.

After World War II ended, the class of plunderers and robbers ruling those countries saw that while they had been fighting each other — killing 100 million people — a third of humanity had liberated itself from their grip. In the early post-war years, armed partisans who had resisted Nazi Germany inspired hope of possible worker-led socialist revolutions in Greece, Italy and France.

In 1949 Washington, then by far the dominant imperialist power, founded NATO. This military alliance was poised to crush any incipient workers’ revolution in war-ravaged Western Europe — as the British and U.S. military did in Greece — and to confront the Soviet Union and its allies in Eastern Europe. Only in 1955 did the Soviet Union establish the Warsaw Pact with its allies in Eastern Europe to defend its area of Europe.

NATO’s reactionary history includes planning a military coup in Greece in 1967. NATO supported clandestine terrorist actions in Italy between 1968 and 1982 known as the “strategy of tension.”

In 1974-75 in Portugal, after a revolution ousted the fascist regime there, NATO sent warships to intervene to prevent the working class from opening a struggle for socialism.

Washington has always dominated NATO and set its policies. The U.S. president always chooses the NATO commander, and the general in charge is always from the Pentagon.

In 1990, during negotiations between the U.S. and Soviet leaders to end the Cold War, Washington promised not to move NATO eastward. NATO’s declared purpose up to that time was to “defend member nations from threats by communist countries.” Thus NATO should have dissolved after the Soviet Union’s impending disintegration in 1991 and the dissolution of the Warsaw Pact.

But since 1991, far from dissolving NATO, Washington has insisted that the military pact expand, while remaining under U.S. command. Poland, Hungary and the Czech Republic joined NATO at its 50th anniversary meeting in April 1999. This expansion coincided with the U.S.-NATO air war in the Balkans that destroyed the sovereign and multinational country of Yugoslavia.

The former Yugoslavia — once a state representing about 20 million Balkan peoples — was broken into six ministates, along with the U.S. military outpost called Kosovo, wrenched from Serbia. All are easy pickings for West European and U.S. imperialism.

U.S. policy turned NATO into a type of imperialist police force. No longer confined to Europe, NATO has become a worldwide intervention force at the service of the transnational monopolies that exploit global labor and resources.

Other U.S.-led NATO military interventions followed. The U.S. invaded Afghanistan in Central Asia starting in 2001, using the pretext of the 9/11 attack and invoking Article 5 of the NATO charter calling for collective defense. The occupation continues for nearly 18 years, with NATO troops intervening starting in 2003.

In 2011, with the flimsiest of pretexts, NATO attacked and destroyed Libya. That same year NATO countries also sabotaged and subverted the Damascus government in Syria. NATO even intervened in Iraq following the U.S.-British invasion in 2003, despite the reluctance of France and Germany to join the invasion itself. These interventions killed millions of people and displaced tens of millions.

There are now 29 NATO members, including most of the former socialist Eastern European countries, plus nine other countries that have a special relation with NATO of “global partner,” like Colombia. NATO’s role now is to reconquer those areas of the world that had gained some independence from imperialism during the existence of the Soviet Union.