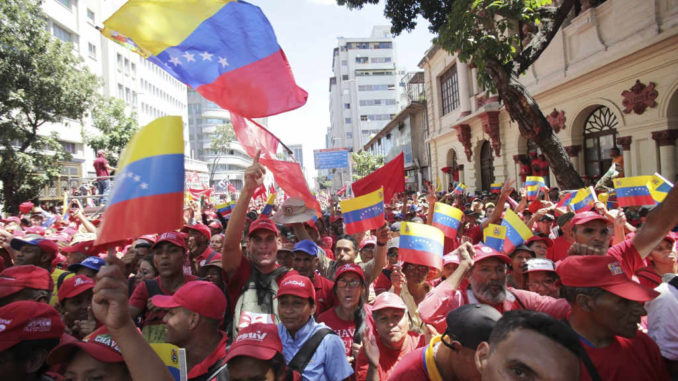 Feb. 25 — The first showdown in the latest U.S.-led aggression against Venezuela ended on Feb. 23 in a clear defeat on the ground for the imperialist forces and their local lackeys.

None of the so-called opposition attempts managed to force the U.S. “humanitarian aid” into Venezuela. (See article, p. 10.) Colombian state forces and armed gangs created some short-lived havoc on the bridges, but no provocation succeeded in opening a path for goods, weapons and troops to cross.

Having lost this battle, the White House gang directing this assault adopted tactics pushed during the occupation of Iraq by George W. Bush’s War Secretary Donald Rumsfeld: “If you can’t solve a problem, make it bigger.” Unable to win with reactionary forces from Venezuela, they threatened direct U.S. military intervention.

First, they lied about what happened on Feb. 23. They had orchestrated the confrontation at the bridges to try to force the Bolivarian troops to fire on the “opposition” and then use this to justify imperialist intervention. The international corporate media machine spread this line.

That didn’t happen, and in an article that mostly attacked the Maduro government, the New York Times finally called the scene at the border “chaotic and inconclusive,” adding, “although a few members of the security forces defected, Mr. Guaidó’s hope that the armed forces would step aside and even join his flag-waving supporters did not come to pass.” (Feb. 23)

The worldwide movement in solidarity with Bolivarian Venezuela knows the following: Every meeting, demonstration, article and tweet that counters these lies and supports Venezuela’s sovereignty is part of the battle to stop another U.S.-led war of aggression.

Second, the White House gang leaders were sent to Colombia to meet with their puppet, Juan Guaidó, and threaten war against Venezuela. Guaidó was photographed, looking like the pawn he is, next to Vice President Mike Pence and Colombian President Iván Duque at a meeting of the 14-member Group of Lima.

Although most of this group of countries from the Western Hemisphere has attacked Venezuela and the government of Nicolás Maduro — with Mexico dissenting — it refuses to authorize a military strike. The European Union has lined up with Washington behind the verbal and economic attacks on the Caracas government. However, the EU also won’t endorse a military strike.

Neither the leaders of the Group of Lima nor those of the EU are willing to take responsibility for openly supporting a Yankee invasion and occupation of Venezuela.

In the United Nations, many countries — outsiders beyond the immediate imperialist orbit — have continued to recognize the Maduro government. The upstart Guaidó was a virtual unknown in Venezuela until Pence told him to name himself “interim president” in January.

This lack of world support did nothing to stop the White House gang — including Sen. Marco Rubio — from making violent threats against Maduro. Since the Feb. 23 defeat of their plans, Secretary of State Mike Pompeo said Maduro’s “days were numbered”; Pence said at the Group of Lima meeting in Bogotá that the U.S. would impose stronger sanctions and “take concrete steps”; and Rubio tweeted a photo of the assassinated Libyan leader Muammar Gaddhafi in an attempt to intimidate Maduro.

Speaking to tens of thousands of supporters in Caracas on Feb. 23 — a crowd much larger than the gathering at the “Live Aid Concert” on the Colombian side of the bridge in Táchira state — Maduro anticipated these threats with his own bold steps.

First, he announced that Venezuela was breaking relations with the pro-U.S., reactionary regime in Colombia: “No one has ever fallen as low as President Duque” in his servility to the Yankees.

“Let us be proud of our courage, of popular power. This is a battle for dignity in the face of those who want us to kneel before imperialism.”

Second, Maduro said to the huge crowd, “If one day you find out that they did something to me, go out into the street and make a socialist and proletarian revolution.” By saying that, he was recognizing that many workers would like to turn Venezuela’s Bolivarian Revolution into a complete overhaul of the social system itself.

Calling on the workers and people to mobilize to defend the government, a statement from leftist parties and organizations, including the Communist Party of Venezuela and the Homeland for All Party, wrote in a similar spirit: “We call for the establishment of worker-peasant-communal and popular control over the processes of production, commercialization and distribution and for the promotion of a plan of national industrialization and a true agrarian revolution that will definitively remove us from the dependence, exploitation and ruthless anti-patriotic extortion by the great historical enemies of the Venezuelan people and the world.” 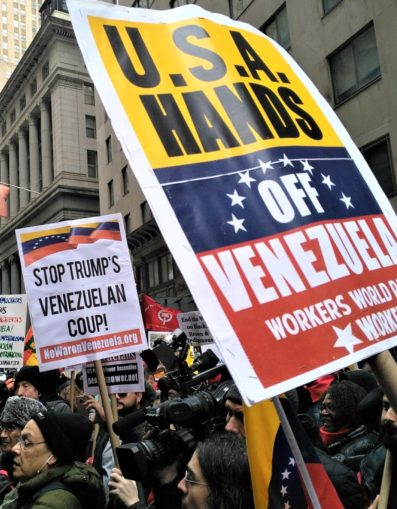 Message for the people of the U.S.

In a short video message on Feb. 24, Maduro thanked the people of New York for the solidarity demonstration held the day before on Wall Street. Venezuela’s Foreign Minister Jorge Arreaza spoke directly to the U.S. population in a Feb. 25 interview on Democracy Now!

“Because the coup failed, now they’re looking for what they call other options. And there is when it’s dangerous. And I believe that the American people have a word here,” said Arreaza.

“But also American soldiers will die, Marines will die in Venezuela, because we know how to resist. We are ready also to defend our homeland. But that’s not what we want. I believe that the American people and the American institutions can stop this from happening, this insane proposal of invading Venezuela. And this is the right time to do it.”

The people in 150 cities around the world who came out on Feb. 23 to defend Venezuela have taken the first step in giving a positive answer to Arreaza and Maduro’s message.