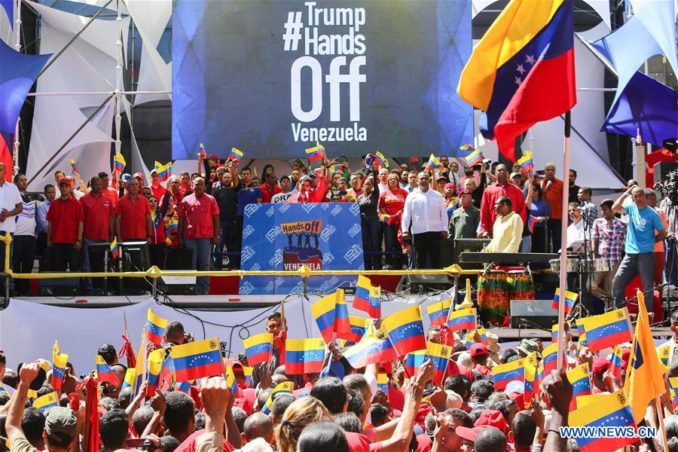 Caracas, Feb. 23 — A massive mobilization is currently taking place here at the Miraflores Palace, the seat of the Venezuelan government, where the constitutional President Nicolás Maduro is announcing that the attempted coup d’état “has failed.”

The march began this morning after a failed attempt to provoke violence on the Venezuelan-Colombian border.

Following are some of the main points made by Maduro to the crowd:

There are key guidelines, the most important of which is loyalty. The other is consciousness — defending the truth in each neighborhood, with arguments and with love. You will have to stay mobilized as long as possible.  Venezuela will win the peace.

No one has ever fallen as low as President [Ivan] Duque of Colombia. I have decided to break off relations with Colombia.

The people of Venezuela took to the streets to defend the civilian-military unity, saying “Yankees go home” to Donald Trump. Your combativity is impressive, along with the consciousness shown in your slogans. You are the invisible ones, the ones who never appear on gringo or international television.

Let us be proud of our courage, of popular power. The invincible ones are  unstoppable, indestructible. The media refuse to show that we are the majority. We are Chávez’s children. The mobilizations are impressive. I congratulate Diosdado [Cabello]. In Zulia, Mérida, Táchira — from one end to the other, the Homeland is mobilized under the tricolor flag. This is peace with social justice and freedom with dignity.

This is a battle for dignity in the face of those who want us to kneel before imperialism. We defend the dignity of the Homeland; this is no time for betrayal, it is a time for loyalty to the Homeland and to the supreme ideals of Venezuela. I am nourished by the loyalty of the people. I am stronger than before.

A month ago we met in Miraflores and I told them that the working-class president would continue to lead Venezuela. I am here because you are the ones who decide in Venezuela. Trump does not decide, nor do Ivan Duque’s pawns. Here, the sovereign people decides, and no one else.

I swore to respect the Constitution and defend it — even with my life. I ask the opposition minority how far they will go to harm the country by betting on an invasion? I ask them, what have you achieved in 20 years of conspiracy?

Why didn’t you call for elections after 30 days, if you have the power? I was the president in charge and I called elections in 30 days. Where is the announcement? We are waiting for the clown with a thousand faces to call elections. I challenge him, to see who has the votes.

He has not appointed ministers, the coup has failed. The victory belongs to us. They are going to continue playing interventionism. Today they wanted one more show.

Yesterday and today they had their show and they disrupted the border. They attacked a Chilean journalist and an officer — all my solidarity goes out to them. We are going to guarantee peace at the border, my heart does not skip a beat.

They try to whitewash the military threat of a monster like Trump with a little song here and another there. It is traitors who sing to Trump. Trump himself acknowledges that he contemplates an invasion.

I call for global solidarity, it is time for courageous voices to be raised. We tell Trump to get his hands off Venezuela. They talk about food aid — in all his life, who did Trump ever help?

The coup was made against Chávez [in 2002] and with their heroic action, the people rescued him. The opposition has done everything, but they’ve never fallen so low as now. They have kidnapped the leadership of the opposition parties and they go after the embassy, they have no thought of their own. 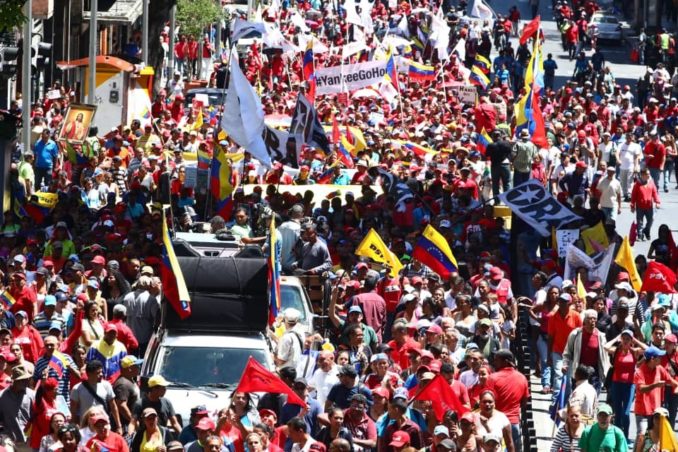 If they get me, make revolution

If one day you find out that they did something to me, go out into the street and make a socialist and proletarian revolution. Trump’s hatred is very great. He hates the peoples of Latin America, that’s why he wants to build the wall.

Trump said that Venezuela is the country with which they should go to war, as one FBI agent announced. He wants to put an end to this beautiful experience of democratic revolution.

Humanitarian aid is a trap. I speak to people of good will who believe the opposition wants to help Venezuela. They’re masking everything to get the military gringos in and steal our wealth for another hundred years. The problems must be solved among Venezuelans, without anyone interfering.

They send rotten food. There are already two dead because of that. And they sent an amount that would not even reach 15,000 homes, and we have reached six million every month. It’s a bad show. It’s a rotten package. That’s the truth, and I’m not afraid or offended by the truth.

They want to bring trucks with powdered milk, rice, meat — I’ll buy them for the popular markets tomorrow. For good we’ll do everything, for bad nothing.

I have a list of 50,000 Venezuelans who want to return because of the ill-treatment in Chile or Colombia.

Of course we have problems, we are in an economic war, but there is a protective state that takes care of the people. There is still a lot to build and neither Trump nor the fascist right will do it. We will solve the problems with the Bolivarian government holding the reins of the country.

Never in 200 years has there been an onslaught like this one, so dirty and so sharp.