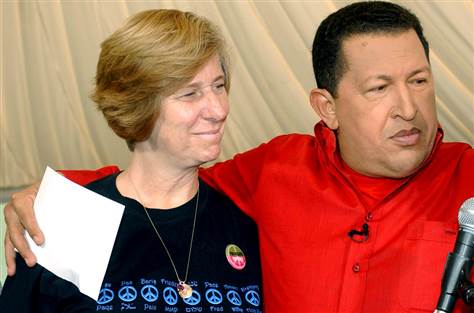 Since Hugo Chávez Frias became president of Venezuela in 1998 and immediately fulfilled his promise to have the people write their own Constitution and its provisions for social improvements were being rapidly instituted, the U.S. has had the Bolivarian Revolution in its crosshairs.

Since then, the income gap in Venezuela has narrowed; people have been educated and their health (including dental and vision) taken care of; housing and food became human rights instead of privileges for the wealthy; and so forth. Not only these things, but the people of Venezuela were empowered to have a say in their government. For example, the only way the Bolivarian constitution can be amended is through public referendum. With the elitist Constitution of the U.S., only the elites can realistically amend it.

Chávez was a champion of not only the people of Venezuela, but brought a new standard of life to Cuba, recognizing Fidel Castro as a great leader and recognizing Cuba as a force for good in the world. The Cuban-Venezuelan alliance brought doctors, professors and engineers to Venezuela to help fulfill the social programs and Venezuela sent beef and oil. Citgo oil (under the leadership of Chávez) was the only oil company to answer the call for low-cost heating oil for poor people in the northeast of North America.

I spent time traveling in Latin America with President Chávez and saw the universal love and respect he received. The U.S. programs of constant harassment and coup attempts did not work against Chávez because not only was he a popular leader, but he was the democratically elected leader of the sovereign Bolivarian Republic of Venezuela.

After Hugo Chávez died of a very aggressive form of cancer, Nicolás Maduro was elected president after a short term of interim presidency.

Maduro is NOT a “dictator.” He has been elected in legitimate and transparent elections — the last one by 67 percent. Nor is he corrupt or incompetent. Since he took over the reins of the government, he has not had one moment of peace from the opposition in Venezuela which is fully supported and funded by the U.S. Empire.

The U.S. has placed numerous economic sanctions and diplomatic restrictions on what it calls a “state sponsor of terror.” The U.S. has been helped by its puppet in the region: Colombia. President Maduro has been doing a heroic job of trying to hold the legacy of Chavismo and the Bolivarian Revolution together.

I strongly condemn the recent U.S.attempts at further destabilization in Venezuela when the corrupt and vicious leadership “recognized” the traitorous, counterrevolutionary Guaidó as the “legitimate leader” of Venezuela by executive decree. By international law, the U.S. is the largest “state sponsor of terror” and the Trump regime has little support in the U.S., so why should its decrees be accepted internationally?

In addition, I deeply condemn and reject the appointment of the convicted war criminal Elliott Abrams as special U.S. envoy to Venezuela. With this signal to Venezuela and the world, I fear the next step is a military invasion, which I would also profoundly oppose.

I proudly stand with the legitimate government of Venezuela, President Maduro and the people of Venezuela who, after being empowered by the Bolivarian Revolution, will refuse to descend back into poverty and tyranny.