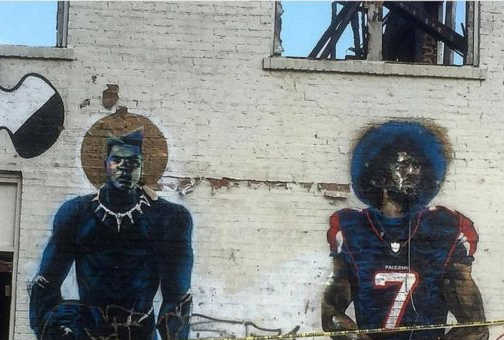 Feb. 10 — When the capitalist colossus known as the Super Bowl takes over a city like it did Feb. 3 in Atlanta, it’s hard to break through the nonstop hype to address the realities facing working and poor people in the neighborhoods around the Mercedes-Benz Stadium.

But when the city decided to demolish an abandoned building not far from the stadium where Fabian Williams had painted a mural of Colin Kaepernick in 2017, he and his fellow street artists and muralists decided “game on.”

Kaepernick, former quarterback of the San Francisco 49ers, shook the owners of the NFL and the political establishment by “taking a knee” during the playing of the U.S. national anthem in 2016. His action was a dramatic protest of the police killing of people of color, especially Black men.

Kaepernick inspired other professional football players, as well as other athletes in many sports, to follow his example. His embrace of the Black Lives Matter movement so enraged the right wing that no National Football League team has since offered him a contract, despite his stellar career.

Williams, who had freshened up the paint on the mural for the Super Bowl crowds, happened to be driving by the wall on Feb. 1 — only to see the city’s bulldozer destroy his work. He determined right then that multiple images of Kaepernick would appear on walls across the city by the time of the big game.

Funds were raised for paint through social media, artists volunteered their talent, and building owners gave their permission for the resistance murals.

The project was named “KaeperBowl.”

By the end of the football game, at least seven more images of Colin Kaepernick decorated walls in different Atlanta neighborhoods, bringing a message of struggle against racism and injustice.

The ubiquitous Super Bowl signage is gone, but it’s likely that the KaeperBowl will roll on.