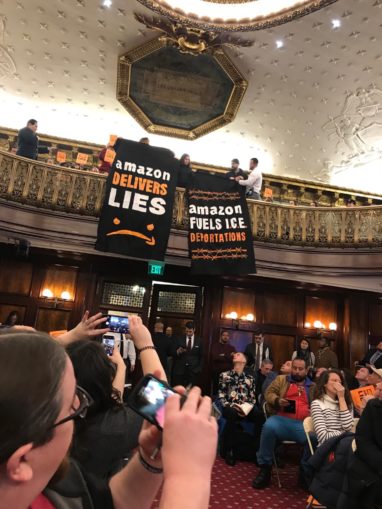 Corporate behemoth Amazon announced in September 2017 it would build a second headquarters (HQ2) in whichever U.S. city offered it the best deal. After a year of city and state politicians across the country wooing the company with increasingly larger promises of tax breaks and handouts, New Yorkers found out last November that they had unfortunately won the bid for this notoriously anti-worker, union-busting corporation.

However, New York City is a union town with a strong protest history and culture. Despite the efforts of Mayor Bill de Blasio and Gov. Andrew Cuomo to cut a backroom deal with Amazon, worth nearly $3 billion in corporate welfare, city residents are making their voices heard, as they did at the City Council meeting on Jan. 30.

Their message was clear: Amazon is not welcome here.

It was the second in a series of meetings that the NYC City Council has called in order to talk with Amazon representatives and review the deal in which they did not have a say. Although there is no official public comments section in Council proceedings, these meetings have become a target of the mass movement because they offer a rare opportunity, in an extremely undemocratic process, to show Amazon directly that the company is not welcome.

Some City Council members had strong words for Amazon, but this was undoubtedly due to mounting pressure from below. Before the meeting began, a rally was held by a number of groups representing different aspects of the struggle, from frontline communities in Queens to tech workers and college students in other boroughs.

Several unions attended, although not all were there to protest. The Building and Construction Trades, which Amazon has said it will work with on the construction of HQ2, showed up to support the corporation. However, the Department Store Union (RWDSU) and Teamsters Joint Council 16 spoke against the company receiving corporate welfare and demanded that Amazon allow its workers to be unionized.

Throughout the rally, several issues were raised in protest. These include the role Amazon would play in displacing Queens residents and further gentrifying New York City like the company did in Seattle; the company’s contract with Immigration and Customs Enforcement to develop facial recognition technology; and horrific working conditions in its fulfillment centers.

Protesters also proposed a number of things the $3 billion in tax breaks and handouts to Amazon could be spent on to improve conditions for NYC residents, including affordable housing, repairing the crumbling subway system and reducing tuition costs in the City University of New York system.

After the rally, protesters packed the City Council chamber. When the first representative from Amazon spoke and said that New Yorkers would benefit from Amazon, two banners were dropped. One read, “Amazon delivers lies” and the other said, “Amazon fuels ICE deportations.”  Protesters continued to hold up signs with the same slogans each time a company representative spoke.

The Jan. 30 protest was a clear sign that there is a growing mass movement in New York City against the Amazon deal. This monstrous $3 billion giveaway, combined with undemocratic city planning, are bringing together a diverse array of groups in a common struggle.

Amazon executives are definitely feeling the heat. Over the last several weeks, the corporation has conducted a slick public relations campaign to convince New Yorkers of its lies. Residents in and around Queens have received multiple pieces of mail telling them about how they will benefit from HQ2. But Amazon’s propaganda is all lies — and the people of New York are seeing through them.