Following the Jan. 22 settlement between the Los Angeles school district and the United Teachers of Los Angeles — a union with a majority constituency of oppressed women of color — education workers are on the move in other states and districts, including teachers and support staff in Virginia and West Virginia. 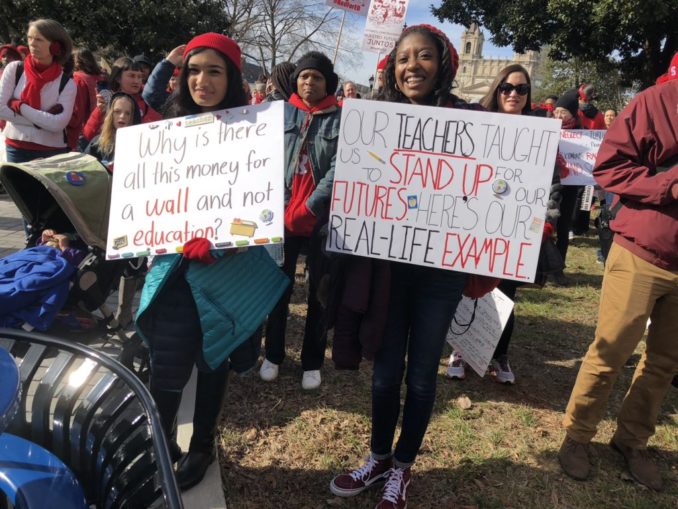 West Virginia education workers rallied across the state on Jan. 9, the one-year anniversary of their historic strike, here in Saint Albans.

More than 10,000 education workers from across Virginia met in Richmond’s Monroe Park Jan. 28 and marched to the Capitol for a “RedforEd” rally in defense of public education. The Virginia Education Association endorsed the action, which demanded more state funds for education, but it was initiated by rank-and-file VEA members who identify as Virginia Educators United.

Virginia school employees are asking for dignity, respect and pay that is not below the national average. They are also asking the state government to restore the funding for public schools that was cut during the last 10 years.

According to the National Education Association, the average national teacher salary is $60,000. But the average teacher in Virginia, even with accumulated seniority and experience, earns only $51,000 annually.

In December, Gov. Ralph Northam proposed a 5 percent raise for Virginia teachers, but school districts would have to split the cost. Teacher salaries still would not be at the national level. Plus, the raise would not be given to nonteaching workers.

The UTLA won ground on its demand for smaller class sizes. As with most of the teachers’ strike actions, Virginia education workers are concerned about the number of students permitted in elementary classrooms. Ask any teacher or school aide and they will tell you: Smaller class sizes lead to better academic achievement. Class sizes are higher in Virginia than in neighboring West Virginia.

It’s been nearly a year since the nine-day walkout in West Virginia that generated the continuing mass wave of education workers’ actions in the U.S.

As the state’s legislature begins its session, teachers and support staff face retaliation from right-wing legislators. The state’s Senate Education Committee has tied the governor’s pay raise and health insurance funding to a legislative package reintroducing charter schools, vouchers and the elimination of union dues deduction from payroll checks. All these measures were defeated last year as a result of the educators’ strike.

The Senate proposal would eliminate seniority rights and penalize and criminalize participants in any future walkouts. It’s an all-out attack on  unions.

Proponents of this reactionary proposal falsely claim they are trying to “help students,” but the proposal even had language that would increase class sizes.

The “Omnibus bill” passed in the Senate Education Committee, but, in a rare move, the Senate then voted to bypass the Senate Finance Committee. The bill was amended in late January while being read on the Senate floor. Under pressure from militant teachers, the Senate removed language about increasing class size, but it still includes elimination of seniority as a factor in annual reductions in force, employment transfers and other attacks on workers’ rights.

If the bill moves quickly through the House, there may be another strike. The three unions have asked their members to vote to authorize a work action — another walkout — if the House doesn’t defeat or amend it.

A pro-public education rally was held at the Capitol in Charleston, W.Va., on the evening of Jan. 31. “Our Students First” was organized by a grassroots coalition made up of state affiliates of the National Education Association and the American Federation of Teachers, as well the independent West Virginia School Service Personnel Association and other advocates of public education.

The ultraright, union-busting American Legislative Exchange Council and the libertarian-leaning Cardinal Institute for West Virginia Policy have been campaigning in the state to mislead parents and the public into believing for-profit charter schools will somehow improve the lives of students.

Reactionary politicians and business leaders are doing everything they can to weaken workers’ rights by trying to break the unions and replace public schools with corporate-controlled schools.

Since the 2018 West Virginia strike, school and public workers in nearly every state in the U.S. have been forming and joining organizations seemingly modeled on rank-and-file committees of the American Federation of Teachers. These include the Caucus of Rank and File Educators in Chicago and the Movement of Rank and File Educators in New York City.

In some ways, these groups are similar to Teamsters for a Democratic Union that formed in 1975 or Miners for Democracy that fought, starting in 1970, for black lung recognition and benefits within the United Mine Workers. Other examples of rank-and-file militancy can be found throughout labor history.

In the West Virginia educators’ strike, the first rank-and-file group began in the fall of 2017 as a simple Facebook page. West Virginia Public Employees UNITED quickly gathered more than 24,000 members, leading to the formation of the WV United Caucus and then to the Feb. 23-March 7 strike.

The April 26-May 3 strike in Arizona began with a rank-and-file Facebook page called Arizona Educators United, which was then embraced by the Arizona Education Association.

Members of these rank-and-file groups are also activist members of the NEA and AFT affiliates in their respective states. Young teachers, who care deeply about their profession as well as social justice issues and organize heavily through social media, have led the rank-and-file organizing.

More members of these informal rank-and-file groups are becoming increasingly radicalized through their personal experiences and struggles as education workers in the heart of capitalism. This is certainly a positive development.

With the onslaught of corporate attacks on public education, it’s crucial for union leaders, rank-and-file activists and revolutionary communists to work together collectively to push back against the big-business agenda of union busting and privatization.