Teruggi is an Argentine journalist and social scientist who lives in Caracas and who contributes articles to various left publications. Translation by Michael Otto. Original: pagina12.com.ar.

Jan. 28 — It looked over the weekend like a rearrangement of positions was taking place, a maturation of international variables and buying time at the national level.

The right wing held assemblies on Saturday (Jan. 26), and on Sunday launched its call to draw in the Bolivarian National Armed Force (FANB) — the opposition refuses to use the word Bolivarian — in handing them the so-called Law of Amnesty and Constitutional Guarantees for Military and Civilians. The law has been approved by the National Assembly, a body declared illegal by the Supreme Court of Justice, but legality is not the issue today when it comes to an attempted coup d’état.

That law proposes two acts: to pardon those who have engaged in the violent actions from 1999 to date, and to give the green light to those who would lead those acts from now on. The right wing self-proclaims its president and grants itself a future self-pardon. 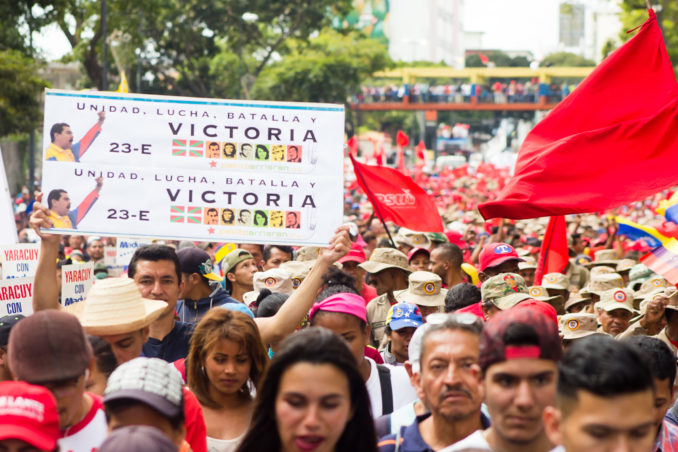 The central objective is the FANB, the axis around which the main speculations revolve. How to add the armed forces to the plan in progress, i.e., how to get a sector to lead the power play.

The relations of the right wing with FANB have been contradictory: On the one hand the right wing has publicly denigrated it, attacked it with bottles of excrement in the street and with weapons of war in the barracks — as in 2017 — at the same time that they have called on the FANB to follow the different plans to withdraw recognition from Nicolás Maduro. The right wing knows they need the FANB, both to carry out the coup and to sustain the future order they would like to impose.

While the right wing has bought time, the situation continued to develop internationally. Threats continued to multiply, such as the one posed by U.S. National Security Advisor John Bolton who tweeted Jan. 27: “Any violence and intimidation against U.S. diplomatic personnel, Venezuela’s democratic leader, Juan Guaidó, or the National Assembly itself would represent a grave assault on the rule of law and will be met with a significant response.” (euractiv.com, Jan. 28)

The United States also recognized a diplomatic representative of the parallel virtual government, Carlos Vecchio, a fugitive from Venezuelan justice and leader of Voluntad Popular, the party to which Guaidó belongs. Voluntad Popular (Popular Will) is the force that has been most closely associated with armed/paramilitary groups in the country; Vecchio is associated with a member of his party who took part in the dismemberment of a woman in 2015.

In addition to that, Benjamin Netanyahu announced that the Israeli government will recognize Guaidó. The United States finished gathering all the parts of the bloc it leads: France, Germany, Spain, Britain, Israel, Canada and the Lima Group without Mexico. The European Union members threatened that if Venezuela held no elections in eight days — now seven – they will recognize Guaidó.

“No one can give us an ultimatum. If someone wants to get out of Venezuela, let him go,” Maduro said on a day marked by FANB military exercises in different parts of the country. There will be no elections.

The different pieces have been placed on the chessboard. It awaits the next steps that will put into motion their plan — a plan that isn’t spelled out — a plan Guaidó summarizes in three phases: “End the usurpation, transition government, free elections.” And Guaidó refuses all dialogue — although there has been a dialogue (in Santo Domingo), in which the government showed good will, but the opposition broke it.

How does ”end of usurpation” become reality? Without that, it is difficult to imagine a real transitional government and a call for elections. So far everything is just virtual reality.

On the other hand, it is necessary to wait for the balance sheets that the United States provides after the assembly of the Organization of American States and the Security Council of the United Nations.

We’ll find out when it happens

Did Washington know that they would fail to achieve the necessary majority? Are they willing to take the next steps without that agreement? We’ll find out when we see what happens.

The strategy regarding Venezuela does not seem to have consensus within the Democratic and Republican parties. Guaidó is presented in various media as an “opposition leader” and not as what he was told he would be, i.e., “interim president.” In addition to being a virtual president, he is also the object of mockery on social networks, with labels such as #GuaidoChalenge [people self-appointing themselves leaders of cities, organizations, etc.].

Was Guaidó, a second-class figure in the right wing, put in that role because he could be sacrificed as part of the strategy? That will also be reflected in the evolution of events.

The weekend ended with more questions than certainties.

Meanwhile, Venezuela goes on with a deeply broken normality, with public meetings of President Maduro speaking to young people and the FANB, and mobilizations of Chavismo in various parts of the country. What lies behind the tense calm?