In the ninth consecutive week of actions by the Yellow Vest movement, thousands of people poured out into cities throughout France on Jan. 11. With more people in the streets and squares than in the last few Saturdays, their numbers increased to 84,000. (BBC News, Jan. 12) 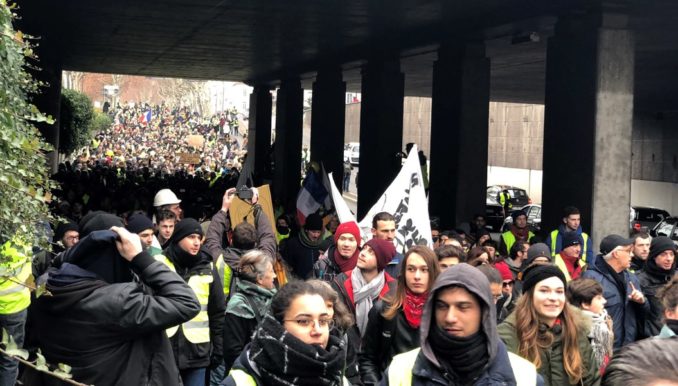 In France, the Yellow Vests march in Lyons, Jan. 11

Across the country some 80,000 police authorities were mobilized to counter the almost equal number of protesters. But a far greater number of the French public is frustrated with austerity and neoliberal capitalism, viewing the Macron government as working on behalf of the wealthiest few. The government’s opponents number in the tens of millions. 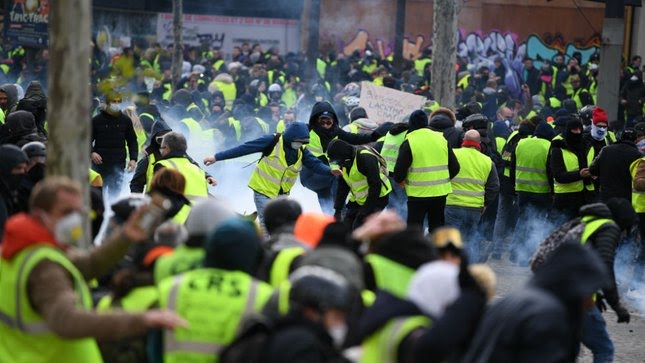 Several Metro stations in Paris were closed and numerous shops were shuttered for the weekend. Police deployed armored vehicles and attack dogs throughout Paris, concentrating on Champs-Élysées Avenue, where some of its many high-end shops have been attacked. Dior, owned by the LVMH luxury goods conglomerate, rescheduled a Jan. 19 fashion show to avoid the protests, which have repeatedly targeted brands like Dior, Chanel and Versace, according to Jan. 9 Reuters.

While the corporate media concentrated its coverage on physical clashes between demonstrators and police, in most of the hundred demonstrations around the country there were no such clashes.

On Jan. 12, President Macron delivered a lengthy letter to the public, intending to extinguish the movement that has swept France by channeling it into the state’s bourgeois political system. How he thinks to totally neutralize the movement remains unclear, since Macron maintained that he would follow the same neoliberal path as before, with tax cuts for the rich and cuts to public spending.

These class issues are the core ones driving public discontent and unless the regime addresses those in a meaningful way, the material conditions that gave rise to the Yellow Vest movement will continue to create resistance and rebellion.