“Stop the war on workers!” and “We want work, not walls!” read signs held by furloughed federal employees at the White House and in cities around the U.S. on Jan. 10. They were protesting the Trump administration’s shutdown of nine federal departments and several federal agencies — one-quarter of the federal government — since Dec. 22. 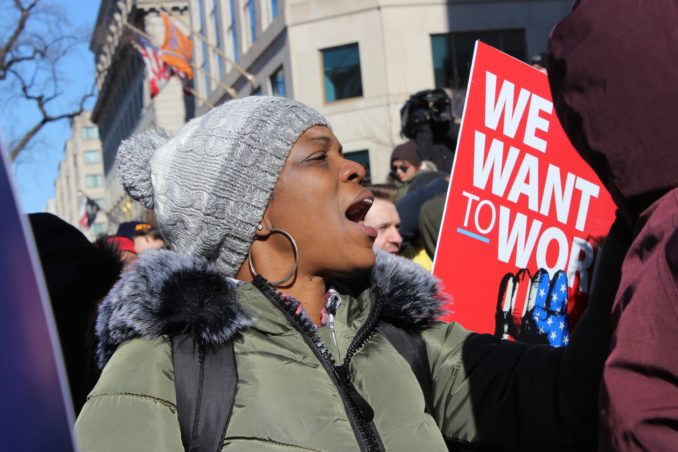 Some 800,000 government workers are not receiving paychecks. Half of them have been shut out of their jobs, while the other half have been forced to work without receiving paychecks — on threat of being fired. It is a severe hardship for many of those impacted by the longest shutdown in U.S. history, which could go on indefinitely.

The reason for the aggressive attack on these workers: President Donald Trump, backed by top Republicans, is demanding that Congress fund a $5 billion wall at the southern U.S. border with Mexico to bar the entry of desperate Central American families fleeing government repression, violence and poverty, and looking for safe places to live and work. Many of the ills they are running from are caused by U.S. political interference and/or economic exploitation in their countries.

Trump’s rants about the need to build this wall are xenophobic and white supremacist to the core. He and his political allies are holding federal workers hostage in their ploy to build the wall, blaming the migrants for the shutdown and deliberately ramping up anti-immigrant hostility to pursue their racist agenda. This is a familiar divisive tool used by the capitalist class and its political representatives.

All progressive forces, particularly labor unions, must strongly oppose the administration’s bigoted rhetoric and show solidarity with these Central American refugees. They are workers, too. This is about class solidarity. 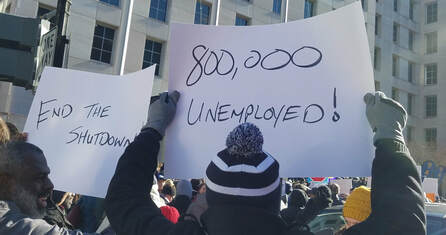 The American Federation of Government Employees, the largest federal government union, called out its members to demonstrate in Washington, D.C., and around the country on Jan. 10. Now is the time to “think outside the box,” to push back the intransigent right-wingers in the administration and their ruling-class backers. This will take creative and militant actions nationally and locally.

The labor movement courageously occupied factories in the 1930s to win union recognition and worker benefits. Public workers were part of the sit-down wave.

The historic Civil Rights Movement sat in at segregated public facilities to break the grip of racist Jim Crow laws in the South. It organized countless demonstrations, including a massive rally in August 1963 in D.C.

The AIDS Coalition to Unleash Power organized militant actions in the 1980s calling attention to the AIDS crisis and demanding research and life-saving treatment.

And last year, disabled activists occupied local congressional offices and Senate office buildings in D.C. to defend the Affordable Care Act. For many, it was a life-and-death struggle.

There are new, progressive Democratic members of Congress, many women of color. Some of them, along with longtime congresspeople, are joining workers’ protests and speaking out on their behalf. A number are denouncing “Trump’s wall” and bigotry.

It’s a big political party. Where are its leaders? They could call for a massive demonstration to circle the Capitol. Democratic members of Congress could take the floor and insist on an end to “business as usual” until the shutdown ends and all furloughed employees and contracted workers are paid lost wages.

But this is a party of Big Business. The workers cannot rely on it for solutions.

U.S. imperialism’s main instrument, the Pentagon, is not affected by the shutdown. It was fully funded earlier by a vote of both congressional parties.

But many federal workers who perform vital social functions like inspecting food, taking care of national parks, administering public housing, curtailing pollution, preparing and serving food, and working as custodians in federal buildings are either furloughed or working without pay.

This shutdown is harming the lowest-paid workers the most. Many are having difficulty paying for mortgages, rent, transportation, child care, medication, food and utilities. While they will receive lost pay retroactively, they need their income now! Many are taking part-time work, relying on family members and/or taking out loans with interest fees. Some are turning to food pantries, churches, and charities and/or setting up online fund appeals.

The shutdown has exposed the reality that millions of workers, federal employees or not, lack the funds to get through a crisis. It has further exposed the financial inequities faced by African-American, Latinx and other workers of color.

Women comprise the majority of the federal workforce, and 81 percent of women workers in the U.S. live paycheck to paycheck. Many are heads of households and sole supporters of their families. Cuts in essential government services are endangering them and their families’ health and well-being. Gender-oppressed people are among those harmed by this shutdown. 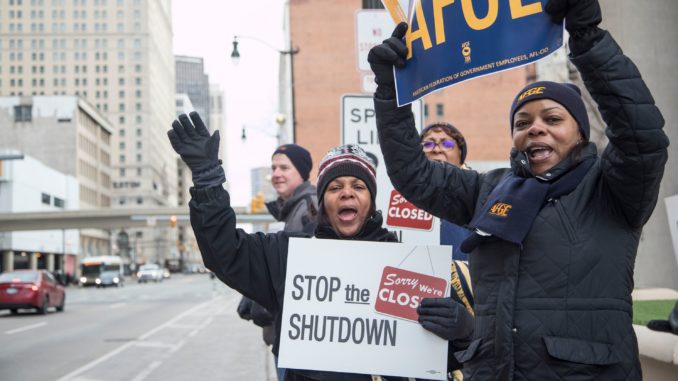 The federal government also relies on contracted workers; 2.8 million of them perform service jobs, from health aides to computer programmers. Many are women. Some of them are affected by the shutdown. A vast pay gap exists among these and other federal workers. Those doing food service and facility maintenance, those who are administrative assistants and security guards all work long hours for little pay — many earning only the federal contractor minimum wage.

Already among the lowest paid in the federal workforce, they will continue to feel financial pain for years to come. Unlike other federal employees, they are outrageously blocked from receiving pay lost due to the shutdown — even those who support families.

Julie Karant, representing Service Employees Union Local 32BJ covering 2,000 federal contract workers in the D.C. area, says, “Our members are predominantly, if not exclusively, African-American and Latino. They don’t necessarily have health care or pension benefits and most of them have multiple jobs.” Loss of a paycheck means they have to choose among medications, food and electricity. (Think Progress, Jan. 12)

This crisis is disproportionately hitting African Americans, who comprise 18 percent of federal workers. Because of the racial wealth gap in the U.S., more of these employees lack the emergency savings needed to get by without regular paychecks. In many Black families, several wage earners work for the federal government, due to private sector racist discrimination.

Lora Williams, a 26-year employee of the National Parks Service, told the Jan. 11 Guardian that she lacks cash reserves and, even with online fundraising, is “barely staying above water.” This Black woman is concerned about NPS contractors who provide essential services like trash collecting but have not received back pay after past shutdowns.

Shaneece Hill and her spouse, both contract workers for the Food and Drug Administration have gone through their emergency savings. They are not guaranteed retroactive pay. (Guardian, Jan. 12)

The shutdown has repercussions on the working class beyond the federal workforce, especially for women of color, people with disabilities and seniors.  Food and nutrition program (WIC) funding for 7 million women, infants and children has already stopped, reports the Jan. 10 Business Insider. Food stamps should continue through February.

Domestic violence shelters countrywide cannot obtain federal funds they depend on. So they are curtailing crucial services for victims/survivors, including housing, transportation, medical care and food.

Federal funds have been suspended for the Indian Health Service, which provides care to over 1 million Indigenous women.

The Department of Housing and Urban Development abruptly stopped funding many assisted living facilities for low-income seniors, with no warning.

Asylum hearings have been postponed for thousands of refugees. Central American adults, youth and children denied asylum continue to be held in inhumane U.S. detention facilities. Families are still separated.