Two major, massive demonstrations took place in Haiti in October and November, when hundreds of thousands of people throughout the country came out into the streets over the government’s plan to raise fuel prices. Some $2 billion in loans from Venezuela for economic redevelopment, through the PetroCaribe program, had gone missing at the same time, most probably into the pockets of well-connected politicians. 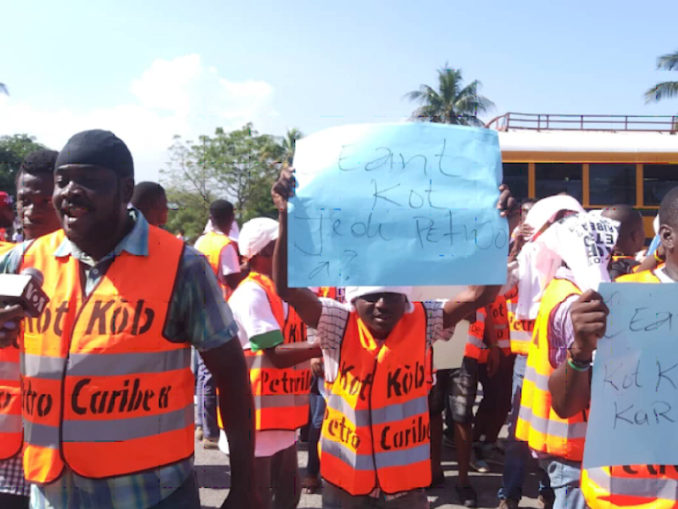 The response of the government of President Jovenel Moïse and Prime Minister Jean-Henry Céant has been weak. It basically called for a Christmas truce in the protests, stepped up repression and armed pro-government gangs.

Conditions for all but the rich in Haiti are abysmal. According to a U.N. agency, 37,000 families who lost shelter in the earthquake of 2010 are still living in 27 tent camps. Hunger is rampant: More than 2 million Haitians, out of a population of 10 million, don’t get enough to eat. And 2 of 3 Haitians live on less than $2 per day; nearly 25 percent live in extreme poverty, on less than $1.25 per day.

Cholera, introduced twice by the U.N. so-called ”peace keepers”; a major drought; and devastation caused by Hurricane Matthew, which ravaged Haiti’s southern peninsula in 2016, have all contributed to the devastation of Haiti’s economy and certainly helped to propel people into the streets.

A group of young Haitians formed the Rally of Engaged Organizations (Rassemblement des Organisations Engagées, ROA) in December to hold a demonstration in front of Céant’s office to demand he explain where the money from PetroCaribe had gone.

The ROA certainly did not accept the ”truce” that Moïse/Céant want to impose on protests. An ROA spokesperson told Haïti-Liberté: “We are inspired by the Yellow Vest movement in France and we are going to adopt the same attitude if the government fails to satisfy our demands.” (Dec. 19)

In March, a lawsuit was filed against President Donald Trump and the top two officials in the Department of Homeland Security for denying Temporary Protected Status to some 50,000 Haitians who live and work in the U.S. The suit maintains that Trump acted out of racism and ignored the current abysmal conditions in Haiti.