Standing over one of Houston’s busiest freeways, Highway 59, activists held a “banner drop” on Dec. 18, International Migrants Day, to show solidarity with the caravans of refugees coming to the U.S./Mexico border. Organized by Houston F.I.R.E. (Fight for Im/migrants and Refugees Everywhere), large banners and signs were held so the tens of thousands of vehicles slowly passing below during 5 o’clock rush hour traffic could see their demands. 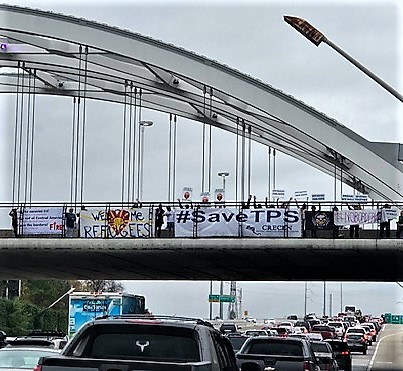 “We were pleasantly surprised by all the honking and thumbs up we received. From 18-wheeler truckers to school buses to workers going home for the day, there was a constant cacophony of horns signaling support for the refugees, a clear denunciation of Trump’s border policies,” immigration activist Hope Sanford with the Migrant Rights Collective told Workers World.

Groups participating were CRECEN, the Central American Resource Center; the Carrizo/Comecrudo Tribe of Texas; the Houston Brown Berets; F.I.R.E.; and the Migrant Rights Collective. CRECEN’s huge banner read: “Save TPS,” referring to President Donald Trump’s decision to end Temporary Protective Status for millions of Central Americans and Haitians who had been allowed to stay in the United States after natural disasters in their home countries.