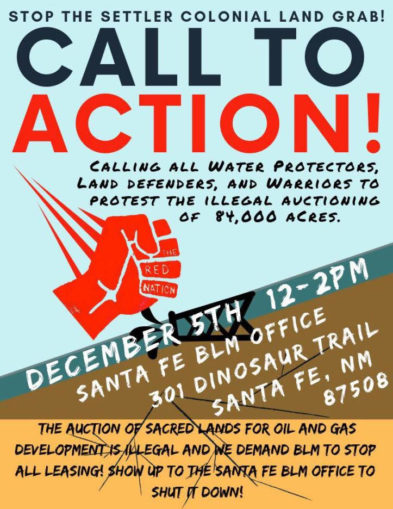 Native activists and environmentalists protested in Santa Fe, N.M., on Dec. 5 against the Bureau of Land Management’s illegal auctioning of 84,000 acres of sacred and fragile lands in the Greater Chaco region and the Greater Carlsbad Caverns region in New Mexico.  The state is second only to Utah in numbers of acres on the block for lease sales for fracking and resource extraction.

The Chaco region has been home to Pueblo and Diné (Navajo) peoples for millennia.  Chaco Canyon contains several ancient Puebloan ancestral ruins of apartment and community buildings, which comprised a former city of immense cultural significance.

The BLM deferred sale of 1,040 acres within the 10-mile proposed protection zone of Chaco Culture National Historical Park as a result of 10,000 formal protest letters being hand delivered to it on Oct. 31. This was the largest protest ever organized in a public comment period concerning oil and gas extraction leasing in New Mexico.

The parcels being sold near Chaco are adjacent to many Diné communities where residents already suffer the impact of fracking leases — such as polluted air, damaged roads, light and noise pollution, increased cancer rates and respiratory illnesses, anxiety and depression, and harm to livestock. Indigenous communities depend upon the land for sustenance and survival. Residents near Carlsbad Caverns have also suffered similarly from fracking operations.

Interior Secretary Ryan Zinke, who is under investigation and resigned on Dec. 15, did not consult with any of the Pueblos nor the Navajo Nation to conduct cultural resource surveys of sacred sites. The December lease was widely criticized by tribal, state and other entities, including the All Pueblo Council of Governors, the Navajo Nation, 15 Diné Chapter Houses, the Eastern Navajo Agency Council and Governor-elect Michelle Lujan-Grisham. The Navajo Chapter Houses have demanded a moratorium on new drilling and leasing in their communities.

E. Paul Torres, the chairperson of the All Pueblo Council of Governors and a former governor of the Pueblo of Isleta, stated: “Pueblo ethnographic information is scarce or entirely absent from the archaeological and academic record that the BLM relies upon in attempting to meet its duties under the National Historic Preservation Act. However, this does not mean the Pueblos’ living ties, knowledge of cultural sites and ability to identify the footsteps and fingerprints of their ancestors does not exist.” (Santa Fe New Mexican, Dec. 4)