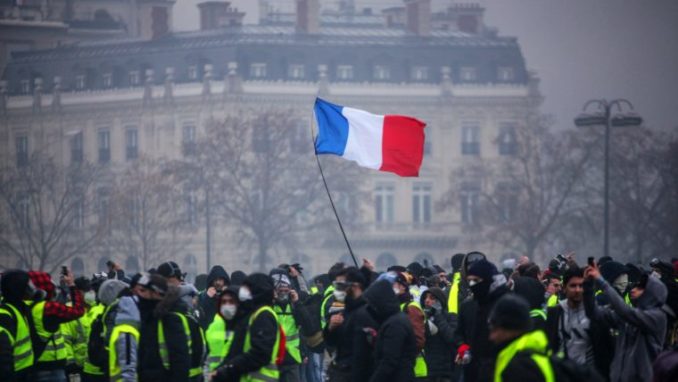 Demonstrators gather near the Arc de Triomphe in Paris during a protest on Saturday.

Nov. 29 — Television channels around the world had the pleasure of broadcasting street events that took place in Paris on Saturday, Nov. 24. Perhaps not all of them have taken care to provide their progressive viewers with the necessary elements to move beyond a sense of chaos and understand the current situation.

On Nov. 24, as was the case a week earlier, thousands of “Yellow Vests” [people wearing high-visibility yellow safety vests required by law in every vehicle in the country] easily overflowed the police lines and invaded the Champs-Elysées to shout their hostility to President Emmanuel Macron’s policies. But this time, the security forces (some 3,000 deployed for the occasion) managed to prevent anyone from reaching the Presidential Palace.

A shower of tear gas grenades and batons stopped the Yellow Vests’ successive attempts to advance toward the Elysée Palace. Without interruption, the battle lasted from 9:30 a.m. to 11:30 p.m. Throughout the day demonstrators erected dozens of barricades, which the CRS riot police then cleared.

Multiple fires lit up the capital, extinguished one after the other by fire brigades. New injuries on both sides, new arrests in large numbers.

The government’s propaganda machine tried to describe the rebellion as a far-right coup de force. This description is a skillful ploy, since it is clear that the extreme right was also there in the crowd of Yellow Vests.

But it is as likely that Emmanuel Macron hopes to nominate his future opponent (in the person of far-right-winger Marine Le Pen) for the next election. If he succeeds, this should give him a comfortable election victory as it did in 2017. But he would still have no legitimacy, if elected only to stop Le Pen.

President Macron claims he “does not back down” by giving in to the popular demands to lower the price of petrol and lower taxes. He knows that the French people will not want racists to lead them. Thus he can win by putting the voters in a bind: They must choose between him and the extreme right.

What he will have to accept quickly, however, is the evidence that the Yellow Vests have drawn much more than the extreme right into struggle. They express the weariness of an entire people who are fed up, including the impoverished middle classes.

The “movement” of Yellow Vests has no leaders and seems to prefer having none. This is true even if in the midst of confusion, “representatives” (appointed who knows how?) have been received urgently by the Minister of Ecology and Energy to discuss, at a corner of the table, ways of making the famous ecological transition “acceptable to the poorest.”

This is an absolutely fundamental and indispensable ecological transition — who doubts it, except Donald Trump and the crown prince of Saudi Arabia? But Prime Minister Édouard Philippe’s neoliberal government uses it as a pretext in the social war against the workers. It’s used to enforce a policy of wage limits that no one who works for wages wants any more.

More broadly, the problem of leadership naturally also arises for left-wing organizations, especially trade unions. The leaders of the reformist unions — led by the CFDT — immediately surrendered to the government, which rewarded them by praising their “negotiating skills” (translation: their willingness to submit).

Much more important is what happens to the CGT union confederation.

Trade union elections on Nov. 26 put the CGT clearly at the top of the trade union organizations at the national railroads (SNCF) — and that is a happy result. Voices among the rank and file internally had expressed their ever louder, bitter disappointment that the leadership of the CGT was trying to slow the momentum of strikes and demonstrations in April-May-June in anticipation of a return to calm — and a summer holiday.

But the workers’ struggles, although dispersed and less publicized, have in fact never ceased since the spring. During the May 2017 presidential election Secretary General Philippe Martinez of the CGT said, “Macron should get the highest possible vote” to beat the candidate of the National Front (which since then changed its name to the National Rally). Today, Martinez has decided to “distance himself” from the mobilization of Yellow Vests, and this has brought about a backlash from CGT members.

As of Nov. 29, the list of comrades who have gone on strike and are blocking their work units in the energy (oil depots, nuclear power plants, etc.), health (ambulance drivers) and mass distribution (Carrefour stores) sectors, in solidarity with the Yellow Vests, is already too long to be detailed here.

Thus the “red vests” of the CGT have announced that they should also be counted as part of the same struggle: They will support the Yellow Vests and will respond to the call of the latter to demonstrate again, throughout France, including in the capital, Paris, on Saturday, Dec. 1.

President Macron and the big money powers he diligently serves have a good reason to worry. It seems that a massive, deep-rooted, multifaceted, determined, unstoppable popular movement has been launched. And the “convergence of struggles” so sought after in the spring could perhaps begin to take shape before winter arrives.