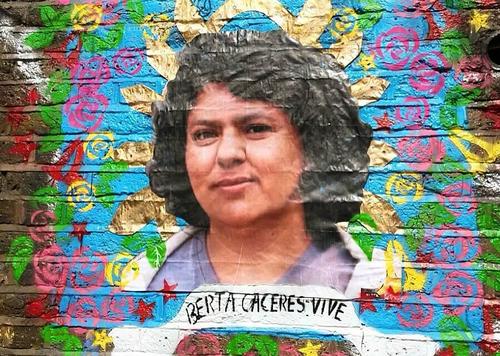 Honduran Indigenous environmental activist Berta Isabel Cáceres Flores (Lenca) received some measure of justice on Nov. 29, when seven men were finally convicted of her murder. Cáceres was killed on March 2, 2016, by agents associated with Desa, a company building Agua Zarca, a hydroelectric dam project. The dam was fiercely opposed by the Council of Popular and Indigenous Organizations of Honduras (COPINH) to which Cáceres belonged.

Though activists had delayed and even successfully relocated the project, Cáceres was assassinated soon after Desa  resumed construction. The Agua Zarca project entailed privatization of natural resources and devastation of surrounding farmland.

The project, and resistance to it, is an example of the broader struggles in Honduras since the U.S.-backed 2009 right-wing coup. The coup government authorized energy projects, mines and other megaprojects in rural Indigenous territory without community consultation.

At least 49 projects have been destined for Lenca territories, and Cáceres had been a leader in many struggles to stop land grabs for this exploitation. In 2013, COPINH activists blockaded roads leading to the Agua Zarca construction site, despite military forces deployed to evict protesters.

Cooperation between military and global capital

Of the seven men convicted in the murder, one was Desa’s security chief, an ex-lieutenant in the military who was affiliated with the Honduran armed forces and who was one of the four who actually did the killing. Both the security chief and one of the other military men were U.S. trained. (tinyurl.com/ya39jdw5)

Three other Desa employees — including the so-called “communities and environment manager” —  were convicted for their role in managing a network of informants and helping with the planning and logistics of the murder.

The Honduran state has long been cooperating with Desa’s efforts to repress popular resistance to the dam. In 2013, soldiers fired on peaceful protesters from inside company buildings, ultimately killing another Indigenous leader.

The Agua Zarca dam project was financed by FMO, the Dutch government’s “development bank,” and Finnfund, the Finnish “development bank.” These and other funds were invested heavily in Honduras ever since the coup ushered in a government favorable to international capitalism.

The close relationship among international finance capital, the Honduran military and local companies keeps wages and costs low and enables a transfer of the “savings” back to Europe and the U.S. as profit. Local oligarchs and foreign bankers get rich, while the working masses are faced with the choice of suffering at home or risking their lives to migrate to the U.S.

In addition to opposition to projects being built on their traditional lands, the Lenca people have fought for justice for Cáceres and other murdered Indigenous leaders.

Laura Zúñiga Cáceres, the daughter of Berta Cáceres, has played an important role in attempts to convict her mother’s killers. In her statement to the court she made clear her intention to continue fighting: “We are not passive victims. We will act because Berta Cáceres deserves it, because the Lenca people deserve it, because they keep persecuting us even now, because this criminal structure that killed Berta Cáceres is still active and we will also denounce that.”