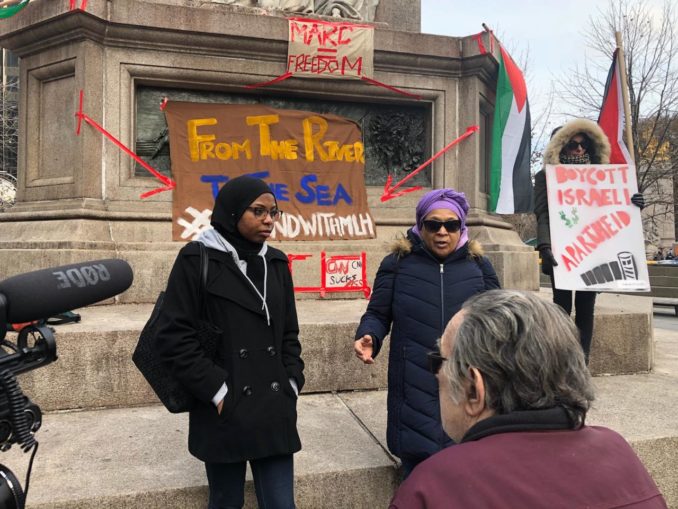 Temple University professor and author Marc Lamont Hill has been fired from CNN after giving an impassioned address to the United Nations on Nov. 29, International Day of Solidarity with the Palestinian People. Dr. Hill made an unequivocal call for the end of apartheid conditions for Palestinians and Africans living within the borders of the so-called state of Israel.

Dozens of protesters gathered in front of CNN headquarters here on Saturday morning demanding that the network reverse its decision and reinstate Hill as a contributor. His termination makes it clear that recognizing the humanity of Palestinians is a fireable offense in the United States.

The CNN executives who shredded Hill’s contract are the same ones who, just last month, denounced the Trump administration’s treatment of White House reporter Jim Acosta. But rather than defend Hill, a young Black academic and activist, the network gave him up to right-wing attack dogs.

Palestinian novelist and activist Susan Abulhawa, author of Mornings in Jenin and The Blue Between Sky and Water, posted a statement on her Facebook page in support of Marc Lamont Hill:

“Marc has been one of our greatest champions, often at great personal cost, and over the past few days he has had to endure an inordinate amount of vitriol, pressure and threats to his person and livelihood. But his commitment to Palestine never wavered or buckled. … I just want to offer my continued support and belief in Marc. He has always stood by us, still is, and I’m standing with him.”

In October, Abulhawa was detained by Israeli forces for over 36 hours and ultimately deported when trying to enter Palestine to speak at the Kalimat Palestinian Literature Festival.

Violence against Palestinian and African migrants

This comes at a time of increased fascist mobilization around the world. Since March 2017, young Palestinians in Gaza have gathered near the militarized barrier dividing them from the rest of Palestine in what they call the Great March of Return. At least 118 of these demonstrators have been shot and killed by Israeli snipers with high-powered rifles. Thousands more who were shot but survived their initial wounds, now face life-threatening consequences from the grevious wounds inflicted by this occupying army.

The youngest victim of Israeli violence during this year’s protests was an eight-month-old girl named Layla Ghandour, who was suffocated in a tear gas attack. Two young journalists, Ahmad Abu Hussein and Yaser Murtaja, were also assassinated by Israeli snipers while wearing vests clearly marked “Press.” The Israeli soldiers also murdered 21-year-old Rawan al-Najjar, one of many health care workers in the partition zone where wounded protesters were treated.

This ongoing massacre is just one of the forms of violence inflicted on indigenous Palestinians and African migrants. Israeli jets have also strafed and bombed Gaza multiple times in the last year, leading to even more death, maimings and displacement. Attacks from the police and from armed settlers occur daily, the misery of the refugee camps and prisons is unrelenting, and there are constant shortages of water, medical supplies, food and electricity.

Despite new Israeli restrictions that make it legal to deport supporters of the Boycott, Divestment and Sanctions movement, Hill was permitted to travel through Palestine last month. He is a frequent visitor, even in this time of rapidly accelerating aggression against Palestinians, in particular those living in Gaza and the West Bank. He returned in time to visit the United Nations on the International Day of Solidarity with the Palestinian People and condemned these apartheid conditions. Hill called for a single state with equality and representation for all those living in the region, regardless of race, gender, religion, sexuality or ability.

This stance has made Marc Lamont Hill a regular target for right-wing and pro-Zionist forces. Just last month, he was pressured to condemn Louis Farrakhan’s purportedly anti-Semitic views. Hill refused on principle to bow to this pressure, acknowledging that raising the spectre of Minister Farrakhan is a common tactic to distract from criticism of Israel.

Regardless of whether CNN reverses its decision, professor Hill faces a new threat to his livelihood: his tenure at Temple University.

In a front-page story on Dec. 1, the Philadelphia Inquirer quoted the outgoing chair of the Temple Board of Trustees, Patrick O’Connor, who called Hill’s remarks “disgusting.”

O’Connor — a corporate lawyer, hedge fund manager and board member of a major chemical company — has been much more protective of his fellow Temple board trustees than of university professors. He served as attorney for fellow board member and convicted rapist Bill Cosby, who assaulted Temple University employee Andrea Constand. When more of Cosby’s victims came forward, reporters asked why O’Connor refused to sever the university’s ties with him. He exploded at reporters, shouting, “I’m tired of this shit!” and called one of them “an imbecile.”

Just last year, students called on O’Connor to resign his chairmanship for showing “a lack of respect … for survivors of sexual assault.” He had just approved the expenditure of $3 million to renovate a nearby park, adding a memorial to honor famous alumni, including Cosby by name.

It could not be more clear that neither the Temple Board of Trustees nor the executives at CNN speak for the workers in their employ. Rather, they represent the same corporate elite interests that profit from the Israeli occupation of Palestine.

“Too often we have framed human rights through the lens of the West,” Hill said in his address to the United Nations. “We have viewed it through the gaze of colonialism. And we’ve assessed them through the limited prism of our own experiences. Simply put, the powerful have too often attempted to universalize their own particular and local values.”

It is ironic that Zionists are demonizing Hill for demanding a single, secular state where Palestinians, Jews and Africans can live together as equals. To say that Hill has called for “the destruction of Israel” is to admit that racial oppression and colonial occupation are the foundation of the Israeli state.

Late on Dec. 1, Hill did offer an apology to anyone who was offended by his use of the phrase “from the river to the sea,” but at no point retracted any of the principled positions he had articulated. That slogan has been used for decades by various groups that struggle for Palestinian liberation. It is not anti-Semitic code language, as Hill’s detractors imply.

The threat of anti-Semitic violence is very real in the United States and Europe. Since Trump’s election, in Hill’s hometown of Philadelphia, Jewish cemeteries have been desecrated and vandalized with swastikas. A coalition of white supremacist gangs attempted to hold a rally outside the National Museum of Jewish American History. And just weeks ago, a white nationalist in Pittsburgh carried out the most deadly anti-Jewish massacre in U.S. history, murdering 11 people in their synagogue. It is not only incorrect to conflate this racist violence with principled condemnation of Israel, it is dangerous.

The white supremacists who commit atrocities against Jewish people in the United States are on the same side as the settlers and soldiers who massacre Palestinians in Israel. Marc Lamont Hill is an enemy to both.

We stand with Marc Lamont Hill! From the river to the sea, Palestine will be free!