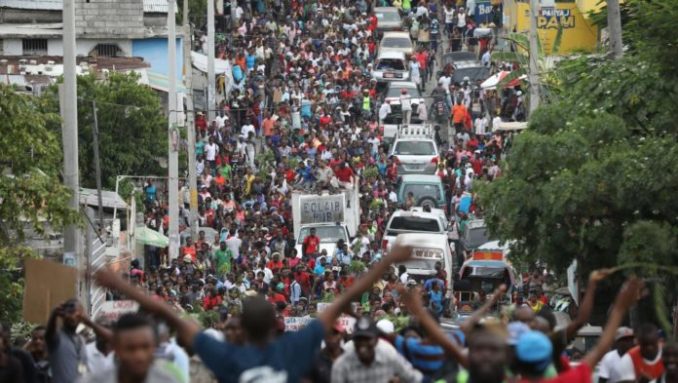 It’s an uprising. Some 80 percent of Haitians went on strike for days after massive protests throughout the country on Nov. 18. That date marked the anniversary of the Battle of Vertières, which sealed the victory of the Haitian revolution in 1803. Major protests, marches and disruptions continued through Nov. 24.

President Jovenel Moïse was scheduled to lay a traditional wreath at the memorial to the heroes of Vertières near Cap-Haïtien, but the boiling anger of the people led him to deposit the wreath at the Musée du Panthéon National Haitien, 100 yards from the presidential palace, while a five-minute, 50-second prerecorded speech was played on national television.

The tens of thousands of people who came out in Port-au-Prince Nov. 18, as well as in most of Haiti’s major cities, including Jacmel, Les Cayes, Cap-Haïtien, Gonaïves, Saint-Marc and Léogâne, were demanding to know “Kot Kòb Petwo Karibe a” — “Where is the PetroCaribe money?” The slogan refers to the billions of dollars Haiti got through a special deal with Venezuela, which let the Haitian government use its profits from discounted oil to finance development.

This vast sum, for the least developed country in the Western Hemisphere, could have brought people ravaged by earthquakes and hurricanes the development they need, but this money appears to have “evaporated” into the pockets of some politicians and their spouses.

In a brutal massacre in the Port-au-Prince neighborhood of La Saline on Nov. 13, a pro-government militia killed at least 15 people and dumped their bodies in garbage pits, according to a report by the newly founded Open Eyes Foundation.

Pressure on Haitian government to resign

The protests on Nov. 18 started out in good spirits, with marchers chanting and dancing to bands marching along with them. When the marchers confronted the police, however, the tone changed. Videos show cops prowling the streets, rifle or gun in hand, throwing tear gas grenades. Protesters built barricades of tires and other trash, which they set on fire from time to time.

The Haitian National Police claimed that three people were shot dead. A major opposition group, the Democratic and Popular Sector, an alliance between outspoken lawyer André Michel and the Lavalas Family party, claimed that 11 people had died, 47 had been wounded and 75 arrested. The Haitian Press Network reported Nov. 18 that six people were killed in protests in Petit-Goâve, Jacmel and Cap-Haïtien.

The U.N. Police Force, which is supposed to be “advising” the various Haitians police forces, had U.N. patrol cars surveying the action.

While the protests began over the PetroCaribe corruption, the attacks on President Jovenel Moïse and his Haitian Bald Head Party (PHTK) grew sharper and more intense as the week progressed. Calls for his resignation or dismissal became much more frequent.

There were reports that residents of different neighborhoods in Port-au-Prince also set up barricades to keep the cops out.

Tensions have been rising in Haiti for decades, but have sharpened in particular since the disastrous earthquake of 2010. Both the Nov. 20 Washington Post and the Nov. 23 New York Times reported on this uprising in Haiti as if it were not connected to Haiti’s extreme poverty, reinforced by the U.N. occupation acting as a proxy for the U.S., nor to the U.S. picking the last two Haitian presidents.

The Haitian government is currently under tremendous popular pressure to resign. However, the U.S. embassy in Haiti issued the following statement: “The United States supports the human rights of people everywhere to freely express themselves and peacefully protest, and supports the Haitian government as it safeguards both those rights, and the security of public and private property.” This has to be seen as interference in another country’s internal affairs.

Haiti has every right to make its own decisions without any U.S. intervention.