Nov. 27 — Twenty-seven protesters were arrested Nov. 23 after Immigration and Custom Enforcement’s horrific seizure of an undocumented man provoked mass outrage. He had sought sanctuary here for the past year at a church. 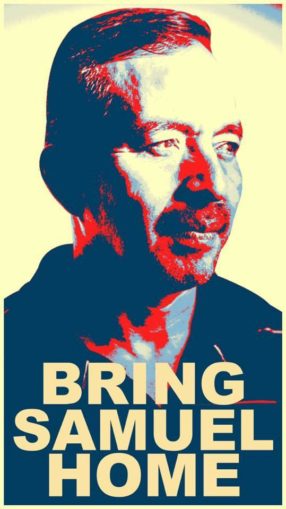 Samuel Oliver-Bruno, 47, had departed CityWell United Methodist Church, his home for the past 11 months, to visit a U.S. Citizenship and Immigration Services office in neighboring Morrisville. Oliver-Bruno had been told to report to the office for fingerprinting, which he understood was a precondition of delaying his deportation. Though a Mexican national, Oliver-Bruno has lived in the United States for more than 20 years.

Upon his arrival at the USCIS office, Oliver-Bruno was grabbed by plainclothes ICE agents and thrown into a van. Several dozen protesters, including immigration and racial justice activists, members of faith communities and Workers World Party, and Oliver-Bruno’s son, Daniel, 19, immediately surrounded the vehicle and linked arms, shouting “Shame” at ICE personnel and local police. Officers eventually arrested nearly 30 people, and Oliver-Bruno was taken to a Wake County holding facility. Officials have since denied his petition for delayed deportation.

A vigil was held at CityWell UMC the next night where a packed house gathered to call for Oliver-Bruno’s release. “Tonight is a space for prayer and for lament,” said Cleve May, a pastor there, who had gone to the USCIS office with Oliver-Bruno. CityWell houses another migrant, one of six (including Oliver-Bruno) currently seeking refuge from ICE in North Carolina churches.

The North Carolina Council of United Methodist Churches issued a statement condemning Oliver-Bruno’s detention: “We oppose immigration policies that separate family members from each other or that include detention of families with children, and we call on local churches to be in ministry with immigrant families.”

The message at CityWell was echoed by others, including Alerta Migratoria NC, an im/migrant rights group. “If deported, Samuel fears for his life,” they said in a release following his detention. “If deported, Samuel will be returned to the state of Veracruz, where his family has recently faced threats and which is a state that is constantly in threat of drug cartels. If deported, ICE will be delivering Samuel to danger and death. Furthermore, ICE is not allowing us to give Samuel his diabetic pills or insulin medication, which is further putting his life in danger.”

In the face of public pressure, Congress members David Price and G.K. Butterfield condemned Oliver-Bruno’s detention: “It appears ICE has acted in concert with officials at USCIS, who instructed Mr. Oliver-Bruno to appear at local USCIS offices to discuss his deferred deportation. … At best, Mr. Oliver-Bruno was presented with a catch-22 dilemma; at worst, he was entrapped.

“Samuel’s sudden and inappropriate arrest in the middle of the Thanksgiving season reflects the callous and cruel approach we’ve come to expect from the Trump administration,” they said. “For one immigration agency under [the Department of Homeland Security] to advise he follow a legal recourse, while another DHS agency plots to apprehend him in the process, is a miscarriage of justice.”

At a solidarity action Nov. 28, held outside the facility where Oliver-Bruno had been transferred after detention, those there to support him were greeted with more bad news: ICE officials had moved him, overnight, to a location in Georgia.

“This morning, probably because they knew you were coming, they moved him from this facility to a facility in Georgia,” the Rev. William Barber told the group. “We will not be a party to political terrorism. We don’t want to see these families destroyed.”

Protesters and activists have called upon DHS Secretary Kirstjen Nielsen to release Oliver-Bruno and delay his deportation.

Oliver-Bruno’s case has garnered national attention at a time when law enforcement is facing increasing public opposition to participation in the 287(g) program, which allows police to collaborate with ICE. Under 287(g), a subsection of immigration law codified in 1996, local authorities are deputized by ICE to enforce federal law, in violation of the traditional separation between local/state and federal agencies.

Several North Carolina Sheriff’s offices, including those in Durham and Wake Counties, had cooperated with ICE under 287(g), but lost elections to challengers who made ending county participation in the program a central plank of their platforms.

Oliver-Bruno’s story adds to the growing number of cases illustrating the brutal cruelty of the Trump administration and U.S. immigration policy. From mothers and fathers being torn from their families to asylum-seeking migrants and refugees being tear gassed at the border, the reactionary nature of the U.S. state is on full, blatant display.